India Women have successfully marked their return in Test cricket after a gap of eight years with an emphatic win over England Women. Sudatta Mukherjee looks at the five things that clicked for the visitors in their first Test in eight years.

India Women — despite fielding ten debutants — registered their second Test win against England in as many Tests on Sunday. However, the gap between the last Test and the just concluded one-off Test was eight years.

Days One and Two were equally shared by the two teams, but Day Three belonged to England Women. At one point, it seem that Sarah Taylor and Jenny Gunn’s partnership would help England Women put up a huge target for India Women. Despite that, Indian Women stuck together, and guided by the experienced Mithali Raj, managed to defeat England Women by six wickets.

Here are the five things that clicked for India Women:

One would have expected Jhulan Goswami to wreck through the batting line-up of England Women. However, it was Niranjana, whose good length straight bowling gave India the upper-hand quite early in the match. Niranjana’s line and length was quite impressive as she trapped Heather Knight, Charlotte Edwards and Lydia Greenway leg-before. England Women were soon all out for 92.

India Women had to come down soon to bat and amazingly, the first day of play saw a fall of 16 wickets. One would have thought that after a good bowling performance by India Women, they would come to bat and take situations under their stride. However, a brilliant bowling performance by Jenny Gunn saw the India Women top-order crumble. Within the 30th over, six batswomen were sent back, and India were in tatters at 64 for six.

It was then that Niranajana and Jhulan’s seventh wicket partnership helped India. Though the duo did not score much, the runs turned out to be crucial at that phase.

India Women were soon dismissed for 114 in the second innings and they had taken a meagre lead of 22 runs. England Women were soon out to bat. However, Jhulan removed Heather Knight on the very second ball. Lauren Winfield and Tammy Beaumont were then going strong, but very soon England Women lost six wickets.

Once again, it was left to Sarah to help England take a major lead in the Test. On Day Three morning, Sarah was removed by Shubhlakshmi Sharma but Jenny Gunn and Anya Shrubsole then went on to create headache for India Women. Jhulan returned to remove Anya and Sonia Odedra. Jhulan’s four-wicket haul helped India Women to stop the England batswoman from progressing too far.

4. Smriti Mandhana’s 50 and the opening partnership

India Women needed a good start from the openers during the chase, and young Smriti and Thirush Kamini gave the team the perfect start. Smriti’s fifty was a show of aggressive and balanced strokeplay. Playing perfectly using her feet, 18-year-old Smriti took 108 balls to score 51 which included nine boundaries. The opening partnership of 76 gave India Women the perfect start to what went ahead to be a historic win for the visitors.

Mithali Raj’s 214 in 2002 at Taunton proved what a kind of player she is. Her 214 had helped India manage a draw, which wasa saving grace for the touring India Women in that series. Four years later, a 65 and an unbeaten 22 helped India win their first Test in England.

However, a lot had changed since then. With Shikha Pandey, the night watchwoman, hardly anyone would have expected the duo to go ahead and seal the match for India. However, Shikha stuck out with her, well guided by Mithali and India Women won the Test. Shikha scored the winning runs and Mithali’s patient 50 put the England Women on the backfoot, with the ODI series ahead. 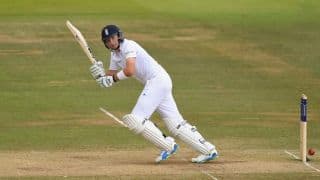