I started following the County Championship with as much fervour as I followed Ranji Trophy.

Growing up in Kolkata in the eighties invariably involved watching Test cricket in Eden Gardens despite the limited leg-space, atrocious toilets, and certain parts of your anatomy sore from sitting on concrete covered with newspapers. But then, the entirety of Kolkata thronged to the arena, braved the subpar conditions for five days, and cheered even when visiting bowlers sent down maiden overs. You must remember that in those days Eden Gardens accommodated 90,000 people. Even then, it was impossible to spot a single speck of concrete left on the other side of the gallery. Test cricket was alive in those days.

The addiction grew stronger with age. I started visiting Eden Gardens for domestic matches. Surprisingly, there was a crowd, consisting mostly of maidan-frequenters, senior citizens, and us (read: students who had decided that attending classes came a distant second compared to cricket when it came to relevance in life).

Within another decade even Test cricket did not attract a packed audience. There were massive stretches of empty stands even after the capacity was reduced to 69,000. The change was not easy to come to terms to for me — and for thousands of others in the city.

With age, however, I had developed another obsession, probably a more dangerous one: history of the sport. This was almost suicidal, for few sports have a history so rich despite the fact that it was barely played outside England till 1850. It was only obvious that history of English cricket would attract me more than others, for the vast timeline, for having a serious domestic cricket structure before any other nation, more than anything else.

With time I knew more, much to my own peril. Hours were spent over WG Grace, Yorkshire and Lord Hawke, Middlesex and Plum Warner, overarm and roundarm and underarm bowling, Tom Goddard and Johnnie Clay, Varsity matches, and even Eton and Harrow. The more I read, the more I learned, and the more I read.

The disease spread like cancer, catching me unaware before I could realise. India. Australia. South Africa. New Zealand. West Indies. Pakistan. If England cricket was worth exploring, surely others deserved similar treatment. It was a vicious circle that led to a chunk of my salary being spent on cricket literature.

I started following the County Championship with as much fervour as I followed Ranji Trophy. I found a favourite in Yorkshire. I had to. Were it not they that considered cricket nothing less than war? Were they not the ones who admonished batsmen for hitting boundaries in the first sessions of Roses matches?

Lancashire were, of course, the arch rivals. Gloucestershire, I had a soft corner for, mostly due to WG and Gilbert Jessop and Wally Hammond. Kent, I was confused about, for Kent had both Lord Harris and Colin Cowdrey, for whom I had contrasting images.

I became fascinated with Graeme Hick and Mark Ramprakash, giants of County cricket but mere mortals at the highest level. I quizzed people on County Championship (one of my early favourite questions involved names of the five counties that did not end in –shire and –sex).

I cheered, mostly in isolation (with occasional outbursts on social media), when Yorkshire lifted the Trophy in 2014 and 2015. These were their first titles since 2001. Before 2001 the last title had come in 1968. Till 2014 my support for Yorkshire had been restricted to basking in the glory of a remarkable history and counting the number of players every time England took field. But now, I had seen it live. I even witnessed consecutive wins for the first time since the hat-trick in 1966 to 1968.

The build-up in the 2016 edition was phenomenal. Yorkshire were in the run (for a hat-trick, if I might remind you) along with a couple of other counties. With two matches to go Middlesex were on 202 and Yorkshire on 201. I checked the schedule. The last match for both sides would be against each other. Could there have been a better finale?

But Yorkshire decided to mess things up by losing to Somerset by 10 wickets. They were shot out for 145 on the first day at Headingley. After that there was no coming back. I also had my eye on the Old Trafford match, hoping Lancashire would trounce Middlesex (oh, the irony!); they did not win, but held them to a draw, which meant it was still not out of Yorkshire’s reach.

Unfortunately, I turned out to be among the handful who cared. It was not the first time I was following cricket all on my own. I have been up at 3 to watch cricket in New Zealand or stayed up till 3 for West Indies. Blanket-clad winter mornings were synonymous to Richie Benaud. Summer nights invariably meant Brian Lara on the idiot box and mosquito repellents off it.

Those were lonely hours. These were lonelier, for live telecast was not legally available in India. BBC were considerate enough to provide with radio commentary on the internet; there was live score updates; and the Twitter handles of the counties and the Championship itself (complete with the hashtag #ProperCricket).

With one match to go, Middlesex were on 213 and Yorkshire on 204. That was fine, since the two teams would clash at Lord’s. But hello, what were Somerset doing on 203? Oh right, they did get 23 from the Yorkshire match, but were they really on 180?

Day Two. Somerset 365. Nottinghamshire 138. Chris Rogers did not enforce the follow-on. Somerset 105 for 2.

Middlesex 270. Toby Roland-Jones got Alex Lees, then Gary Ballance, then Andrew Gale, all three for ducks. Yorkshire 53 for 4. There was a sinking feeling. Tim Bresnan held fort with Andy Hodd. Yorkshire 235 for 6.

Day Three. Rogers declared, setting Notts 541. They got bowled out for 215. Somerset shot up to 226 points.

Tim Bresnan remained unbeaten on 142. Yorkshire lead by 120. Bresnan added 56 for the last stand with, of all people, Ryan Sidebottom. Middlesex become 2 for 2. They amble to 81 for 2 from 38 overs before stumps.

Surely Middlesex could not win from there? It was a two-way contest now, Yorkshire or Somerset… I found myself nodding and smiling, a bit more restrained than a teenager, but not much…

There were not many permutations to be tried out before Day Four. If Yorkshire won they would win the Championship. If Middlesex won they would clinch it. And if it was a draw, Somerset would be crowned for the first time. Simple yet exciting.

For some reason Middlesex looked disinterested despite reaching 200 for 2. They did play a few shots, but were getting nowhere close to a position to declare. In other words, they were putting the onus on Yorkshire.

With 49 overs left in the day Middlesex were 239 for 3. The lead was 119. Surely this would be a draw? Oh, Somerset, after 125 years, what with Rogers having announced his retirement and Marcus Trescothick having signed up for a 25th season…

But Gale was not letting things go, just like that. It was also the farewell for Jason Gillespie, who had coached Yorkshire to consecutive titles. So he resorted to ‘joke bowling’ (Wisden would say “contrived conditions”), getting Lees and Adam Lyth to bowl in a last-moment desperation to speed up the Middlesex declaration.

It was tea, so no over was deducted due to innings break. The target was 240 in 240 balls. There could not have been a better opportunity for Yorkshire. It was time for an espresso.

The chase began. Neither Lyth nor Lees lasted. Gale rightly promoted David Willey to 3, but he struggled before getting out cheaply. Ballance got a quick 30, but Yorkshire needed more than that. That came from, for the second time in the match, Bresnan. Gale kept him company.

Bresnan went after the bowling. There was no point in shutting shop, for anything less than a win would cost Yorkshire the championship. By the time Roland-Jones trapped Bresnan LBW for 55 the genial giant had breathed life back into the match.

Yorkshire needed 87 from 61 balls. That familiar feeling was back, despite sitting in front of a desk over seven thousand kilometres away without live telecast.

They needed 83 when Gale fell. It was that man Roland-Jones again. Yorkshire were virtually shut out of the contest now: there was no way they could get 80 in 48 balls.

It had come down to survival. A hat-trick of titles was not happening anymore. It would be Somerset or Middlesex from here.

Azeem Rafiq, first of Asian origin to have led Yorkshire, now joined the usually reliable Hodd. Steven Finn was negotiated safely before Roland-Jones came back, and had Rafiq caught-behind off the last ball.

Six overs to bat out. Finn. Why are they running singles, Hodd and Steven Patterson? What was the point in wasting energy? Were they still going for it? Oh, if only there was live telecast…

Finn took Patterson with his last ball. Five overs to bat out. Two wickets in hand, but Hodd was still there. Surely he could bail Yorkshire out of this?

Then it struck me. Would it matter if Yorkshire saved this? The title would go to Middlesex or Somerset… there was only one way out for Yorkshire… an honorable draw would mean nothing…

But then, Trescothick and Rogers… no, let it be Somerset. Bat it out, Yorkshire. Bat it out for the sake of Rogers and Trescothick.

It was not to happen. Roland-Jones cleaned up Hodd first ball. As simple as that, first ball.

Hang on, did he not get a wicket with the last ball of the previous over? That means he was on a hat-trick, correct?

He was, as the commentator confirmed. And he did have the hat-trick, for there was no way Sidebottom would come off twice in a match.

Yet another year of wait, now, for Yorkshire. And for me, goodness knows till when. And for Somerset. And for Trescothick. Be rest assured, that Keynsham man, now bespectacled, will be back next season… 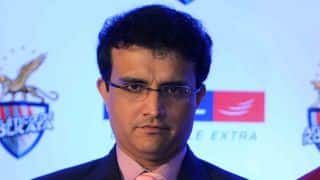 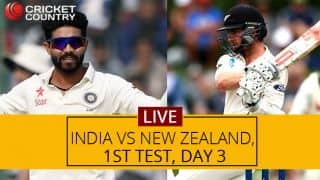