Cricket historians are more or less unanimous in the opinion that cricket had reached Hampshire at some time early in the 17th century. However, even with the famous cricket teams coming out of the region and enriching the history of the game, the link between Hampshire and County cricket, though long, has been somewhat inconsistent over the years. It is felt that the earliest village cricket matches were played in the region during the English Civil War, and that the game had been quite firmly established in Hampshire by the end of the 1690s.

History tells us that the earliest known cricket match was played in Hampshire on Tuesday, May 22, 1733, at Stubbington, near Portsmouth, between two teams known as Married and Single. There was a match played between Hampshire and Sussex in June 1766, the first known instance of Hampshire playing a cricket match with an exclusive identity.

Hampshire County Cricket Club was formally founded on August 12, 1863. They played their first game against Sussex CCC in July 1864 at Antelope Ground, Southampton, and were recognised as a First-Class team from 1864, and eligible to play for the Champion County title. The elite status did not last for very long, however.

The early years were troubled ones for Hampshire, and the team lost their First-Class standing in 1886, consequent upon poor results from the games they played, being confined to Minor County games until they were readmitted to the First-Class status at the beginning of 1895, after a gap of almost 10 years.

Our narrative begins in one of those dark years for Hampshire, when the team was lost to First-Class cricket.

It was a Monday, May 30, 1887, at Southampton. The anticyclone that had previously been seen over the south-west of the British Isles had moved north-east and was seen to be heading towards Scandinavia in the last week of May. The ambient daytime temperature rarely touched 65°F (18.33°C) during the last week of May, with the weather generally set fair. ALSO READ: Ernie McCormick: Australian spearhead, manufacturer of Frank Worrell Trophy

It was under these favourable conditions that the two-day Minor Counties game between Hampshire and Norfolk got under way, and an almost indelible record was set.

It was the era of 4-ball overs in England. Hampshire won the toss and opted to bat first. By the end of Day 1, Hampshire had been dismissed for a rollicking 558, scoring their runs at a rate of 3.46 per over throughout the day. Norfolk finished the first day on 31 for 2.

The highlight of the Hampshire innings was an individual effort of 323 not out by Francis Eden Lacey, scored in 210 minutes of mayhem, with 37 fours, 2 fives, and 4 sixes. This is the highest ever individual score in all Minor Counties cricket and the record is still unbroken, 129 years later. The next highest individual score of the innings was the 74 by HH Armstrong. One John Rye took 4 for 77 for Norfolk.

Norfolk were dismissed for 77 in the first innings, John Hansell top-scoring with 30. Charles Young (6 for 36) and Armstrong (4 for 31) took all the wickets. Following on, Norfolk scored 139. Charles Jarvis top-scored with 29. Cecil Currie took 7 for 51, Hampshire winning the game by an innings and 342 runs.

Francis Lacey was born October 19, 1859 at Wareham, Dorset, the youngest son of William Charles Lacey, and was educated at Sherborne and Gonville and Caius, Cambridge (admitted October 1, 1878), winning Blues in 1881 (Association Football) and 1882 (cricket). He was enrolled with the Inner Temple on October 15, 1886, and called to the Bar on July 3, 1889, and practised as a Barrister till 1898.

Lacey developed into a right-hand bat and a right arm slow round-arm bowler, and played for the Sherborne XI from 1876 to 1878, captaining the school at cricket and football. He had a phenomenal cricket career with Sherborne, scoring 6 centuries in 1878, and appearing for Dorset in the same year.

His First-Class debut was with Hampshire before the team’s exile from the First-Class format. In a match against Sussex at Hove in June 1880, a game that Sussex won quite comprehensively by 10 wickets, Lacey scored 70 and 9, giving a fairly good account of himself in the game.

His seventh match, against Sussex at Hove in May 1882, proved to be quite lucky for him. Hampshire won the toss and batted first, scoring 360. This was built around a solid 157 from Lacey (his maiden First-Class century), who had arrived at the crease at 8 for 2.

The fall of both the third and fourth wickets on 38 paved the way for wicketkeeper Arthur Wood, to join the No. 4 batsman Lacey. They combined for a fifth-wicket stand of 153 before Wood (82) was dismissed. Lacey then teamed up with skipper Russell Bencraft for a seventh-wicket stand of 100, the skipper being dismissed for 56. For Sussex, James Lillywhite took 5 for 102.

The Sussex first innings ended at 94, our man Lacey picking up 4 for 32 to go with the 4 for 40 from Charles Young. Following on, Sussex scored 402, Billy Newham scoring 101. Lacey took 7 for 149, his best innings bowling figures.

Set 137 runs for an outright victory, Hampshire scored the required runs for the loss of 3 wickets, Lacey and Wood remaining not out on 50 and 51 respectively, adding 67 for the unfinished fourth-wicket stand. Hampshire won the game by 7 wickets.

Lacey had another wonderful game in his 16th match, against Kent at Day’s (Antelope) Ground, Southampton, in June 1884. Batting first, Hampshire scored 414, Lacey (211 with 27 fours and 1 six) providing the backbone of the innings. Kent’s seven-man attack included three members of the Hearne family.

Kent were then dismissed for 216, with a top score of 47 from skipper Francis MacKinnon (the 35th MacKinnon of MacKinnon). Following on, Kent posted 344, the MacKinnon patriarch contributing 115 at the top of the order, his maiden First-Class century.

Needing to score 147 in the last innings to win the game, Hampshire won by 3 wickets. Lacey, batting at No. 4, remained not out on 92, passing his personal landmark of 1,000 runs in First-Class games in this match.

Lacey’s next century, an even 100, came in his 19th match, against Somerset at Southampton in August 1884. Batting first, Hampshire put up 645. Lacey (100) and wicketkeeper Arthur Andrews out up a first-wicket partnership of 147. Batting at No. 4, Ernest Powell was run out for 140. Barring wicketkeeper Francis Terry, Somerset used all ten men as bowlers.

The Somerset first innings finished at 254, with identical scores of 57 from debutant Theo Robinson and Francis Reed, who remained not out at the end of the innings. Alas, the total was not enough to prevent follow-on, and Somerset scored 222 in the second knock, yielding victory to Hampshire by an innings and 169 runs. Only debutant John Challen, with 93, covered himself with some glory for Somerset.

Lacey’s last First-Class match was with Hampshire against Leicestershire at Southampton towards in August 1897. He scored 4 and 9* as Hampshire won the game by 6 wickets.

Francis Lacey then played 20 Second-Class games mainly for MCC sides till 1904, when he hung up his cricket boots for the final time.

Francis Lacey was appointed Secretary of MCC in 1898 upon the retirement of Henry Perkins, and held the post for the next 28 consecutive years. Having had legal training and being a barrister by profession, Francis Lacey made a major contribution in streamlining the modalities of functioning of the MCC in his time, bringing about many changes in the previous easy-going methods, never shying away from employing drastic measures when he felt they were warranted.

With the growth and spread of cricket globally, the responsibilities of the MCC, and indeed, of the Secretary, gradually became more diverse and critical. He handled the added responsibility with the efficiency and aplomb that were to become intrinsic and characteristic features of his modus operandi.

Lacey’s service in the Secret Service for England during 1914-19 in World War I may have had something to do with the attitude that he had brought to his duties for the MCC while in charge.

Sir Francis Eden Lacey passed away on May 26, 1946 at Sutton-Veny House, a nursing-home in Wiltshire. He was almost 87. 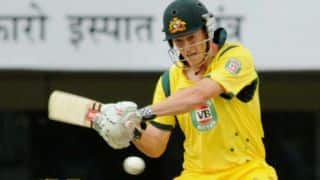