Of all his roles in cricket and otherwise, Frank Mann is best known as a Middlesex mainstay.

Middlesex giant Frank Mann was born March 3, 1888. Abhishek Mukherjee looks at a warrior, an English captain, a genial character, a Middlesex President, a footballer, a rugby player, and a father of a Test captain and MCC President.

Seldom has cricket seen men like Francis Thomas Mann: a larger-than-life character by all definitions of the phrase, Mann was a Middlesex mainstay for over two decades on either side of World War I. An extremely popular man off the field and an imposing personality on it, Mann was one of those men who epitomised Middlesex cricket in the first half of the century.

His kind eyes and comic moustache (a cross between Charlie Chaplin’s and Groucho Marx’s) were deceptive. An extremely hard-hitting batsman (one of the strongest hitters in history, as per witnesses), Mann, with his strong shoulders, had a penchant for clearing the ground. Wisden mentions him hitting the ball on the roof of the Lord’s pavilion four times in an innings against Yorkshire.

He was not a grafter: he was one of those men, who, when in full flow, was dangerous enough to change the course of a match inside a session. He scored 13,235 runs at 23.42 with 9 hundreds. He was also a safe catcher (he manned mostly mid-off during his days at the helm of Middlesex) and finished with 174 catches.

Born in Winchmore Hill, Mann went to the famous Malvern College in Worcestershire; he played cricket for the highly acclaimed Malvernian XI from 1904 to 1907, and led in the final year. He played Association Football and earned a Rugby Blue as well.

Mann made his First-Class debut for Cambridge University against MCC at Fenner’s Ground when he was 20; opening batting he scored 20 in each innings, which was not bad given the fact that Cambridge folded for 139 and 103 against Claude Buckenham and Frank Tarrant. The next season he found himself playing alongside Tarrant for Middlesex against Lancashire: unfortunately, he scored a duck and three on his Championship debut.

The maiden hundred almost came against Surrey at The Oval in 1911: after the hosts had been bowled out for 112 they fought back, reducing the tourists to 169 for 6 when Mann walked out. He slammed a savage 97 not out as Middlesex reached 328; a demoralised Surrey then collapsed to 192 and lost by an innings.

The elusive ton eventually came at Lord’s in 1913. After Worcestershire were bowled out for 238 they reduced the hosts to 39 for 5 when Mann walked out. Plum Warner hung around to add 51 for the sixth wicket, but at 103 for 7 it seemed to be all over for the hosts. Mann counterattacked in the most brutal way possible and scored a 160-minute 135 with 18 fours and 2 sixes: Middlesex eventually scored 238, and other than Warner (35) nobody else crossed ten. Unfortunately for Mann, World War I broke out, bringing a five-year long curtain on English cricket.

Mann fought with valour in The War: he was an Officer of the Scots Guards; he was brutally wounded thrice and has his name Mentioned in Dispatches (MiD) thrice as well. By the time he returned to cricket he was already 31. He had two quiet seasons, but finally came to his elements in 1921 at Trent Bridge.

By then, Mann had been appointed captain of Middlesex. In that match Nottinghamshire batted first and acquired a 49-run lead. Middlesex hit back, but it seemed a hopeless situation when they were left to chase down 245. Mann promoted himself when Middlesex lost their first wicket with 3 on the board; saw his side lose another wicket on 24; and biffed his way to 112 in 165 minutes with 15 fours and 2 sixes. With Patsy Hendren also scoring 56 Middlesex won by 6 wickets. A couple of months later he scored 101 in 165 minutes with 8 fours and 5 sixes.

The next season saw him score two more hundreds as well — a 150-minute 100 with 13 fours and 2 sixes against Essex at Leyton and another 100 (with 5 sixes) for Gentlemen against Players at Scarborough. Later that year he was appointed captain for England side that toured South Africa.

England began the series on a poor note at Old Wanderers. They had a good start to the Test: Alex Kennedy and Vallance Jupp bowled out the hosts for 148. Opening batting with Andy Sandham, the debutant (and captain) Mann was caught by Cyril Francois off ‘Buster’ Nupen for four.

England secured a 34-run lead, but Herbie Taylor turned things around with an epic 176. England were set to chase 387, and Mann emerged only after the fourth wicket had fallen with 114 on the board. There was no real contest to talk about (barring a few lusty blows from Jupp) and Mann was left stranded on 26 as the tourists folded for 218.

The next Test at Newlands could have gone the same way: led by Percy Fender, the English bowlers did a splendid job in bowling out the hosts for 118. Once again, however, they could not capitalise, and were bowled out for 183; batting at six, Mann was trapped leg-before by Jimmy Blanckenburg for 4.

A 155-run second-wicket partnership between Bob Catterall and Taylor then saw South Africa set a meagre 173, but England still had the wiles of Alf Hall to contend with. Hall scythed through the English top-order, removing Sandham, Frank Woolley, Phil Mead, Arthur Carr, and Fender, and at stumps on Day Four England were reeling at 86 for six with Mann on 12.

The next morning Mann came out of his defensive shell, and with some assistance from Jupp, helped add 68 for the seventh wicket. Jupp fell at the stroke of lunch with 19 runs still to get, but Mann carried on after lunch with Kennedy for company. When he was eighth out — caught brilliantly by Blanckenburg at slip off Hall — for 45 (with 2 sixes) England were only 6 away from victory. They almost did a mess of it when George Brown was run out by an excellent throw from deep point for a duck, but Kennedy and George Macaulay polished off the 5 runs required for the win.

With the series levelled the teams moved to Kingsmead. England were reduced to 2 for 2 and then 71 for 4, but Mead carved out a partnership of 154 with Fender and 156 with Mann. The English captain scored 84 in the partnership with 11 fours and 2 sixes: it remained his highest Test score. Mead eventually got 181 as England reached 428. The match petered out to a draw as rain washed off an entire day’s play.

The fourth Test at Old Wanderers ended in a draw as well. Mann’s declaration was a sporting one, and though South Africa became 32 for 2 chasing 326 they easily played out time, finishing on 247 for 4. Mann had a good Test with the bat, scoring 34 and 59 (with 2 sixes).

It all came down, then, to the final Test at Kingsmead: Jack Russell’s 140 (and his 139-run third wicket stand with Mead) helped England to 281 (batting at seven Mann scored 8), and all English bowlers got among wickets as the hosts conceded a 102-run lead. With rain in the air Mann reversed the batting order, and after a very wet rest day he held back Russell till England were down to 26 for 4.

Mann himself emerged at 111 for 7, scoring 15 and allowing Russell to add 37 runs; thanks to a last-wicket stand of 92 in 80 minutes between Russell and Arthur Gilligan England reached 241. Russell, with 111, became the first batsman to score two hundreds in a Test against South Africa.

Chasing an improbable 344 in a Test that had been agreed upon as “timeless”, the South Africans looked safe at 122 for 3. However, it became more and more difficult to bat between numerous phases of rain, and Taylor was the only one who stood tall, scoring 102 out of a total of 234. Mann’s team clinched the rubber by a 2-1 margin, but he never played Tests again.

The next summer Hendren and Mann demolished Essex at Leyton with a 256-run fourth-wicket stand in only 140 minutes. Mann blasted 122 with 14 fours and 2 sixes, Hendren scored an unbeaten 200, but Essex was saved by Henry Franklin, who scored 106 batting at No. 10.

The Trent Bridge epic of 1925 seemed to be going a routine way when Nottinghamshire scored 167 and obtained a 40-run lead. Hundreds from Arthur Carr and Wilfred Payton then lifted Middlesex to 461, leaving the tourists with a near-impossible target of 502. Middlesex lost 4 wickets for 66 (they were 60 for 3 when play started on the last day), and it seemed a lost cause.

It was then that Clarence Bruce came to the party, scoring 103 and helping Hendren add 154 in 95 minutes. Nottinghamshire struck back immediately with the wicket of Leslie Kidd — and Mann walked out. He shifted to an uncharacteristic defensive mode, playing a second fiddle to Hendren to begin with.

As the runs kept coming both Hendren and Mann opened up, and suddenly the chase seemed on; Hendren, who had been thoroughly outplayed by Bruce, went on to score 206 while Mann remained unbeaten on 101 with 15 fours. The tourists chased down 502 for the loss of 6 wickets. It remains the highest total successfully chased in the County Championship and the joint second-highest total on English soil (Cambridge University had chased down 507 against MCC in 1896 while Players had got 502 against Gentlemen in 1900; both matches were played at Lord’s).

Yet another Mann classic came against Warwickshire at Edgbaston: Middlesex conceded a 206-run lead and were down to 67 for three when Mann walked out. Once again there was a furious onslaught before Mann actually managed to declare the innings, setting a 230-run target. In the interim he had slammed a career-best 194.

Mann stood down as captain in 1929, though he continued to play Championship cricket till 1931. He played his last First-Class match for HDG Leveson-Gower’s XI against Oxford University at Eastbourne, scoring five and 28 before bowing out.

In his later days, Frank Mann went on to become the President of Middlesex. He founded Cranbourne Cricket Club, and served as the President till his death on October 3, 1964 at Milton-Libourne in Wiltshire. He was 76 .

Frank’s elder son Francis George (usually referred to as George Mann) also went on play for Cambridge University, Middlesex, and England, and led his country against South Africa, just like his father. He also went on to become the President of Middlesex — and went a step ahead when he was elected President of MCC. His dismissal against Tufty Mann was immortalised by John Arlott with the famous line “Mann’s inhumanity to Mann”.

George’s brother John Pelham also went on to represent Cambridge and Middlesex, but did not quite make it to the Test team (though he captained Eton in six different sports including cricket). Both George and John had excellent records in the Second World War as well. Their nephew Edward Cunningham played for Gloucestershire.

George’s son Simon Francis, however, chose an entirely different career: a former British Army Officer and a mercenary, Simon Mann was arrested in the 2004 Equatorial Guinea coup d’état attempt. Mann, along with 69 others, was arrested in Zimbabwe when their Boeing 727 was seized at Harare. The aircraft apparently contained weapons worth £100,000, and Mann was sentenced to a 34-year imprisonment, though he was later released on humanitarian grounds in 2009. 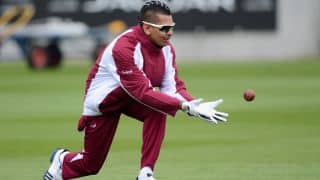 Sunil Gavaskar makes a welcome comeback – and how!