Fred Huish, the first in a long line of champion wicketkeepers of Kent, pulled off a feat that remains a world record till today. After stumping 4 men in the first innings against Surrey at The Oval, Huish added 5 more to his tally (along with a catch) in the second.

August 23, 1911. Fred Huish, the first in a long line of champion wicketkeepers of Kent, pulled off a feat that remains a world record till today. After stumping 4 men in the first innings against Surrey at The Oval, Huish added 5 more to his tally (along with a catch) in the second. Abhishek Mukherjee looks back at a rare day when a wicketkeeper stole the show.

Frederick Henry Huish was no ordinary wicketkeeper. Unassuming and undemonstrative, Huish was equally adept to pace and spin, and was the fulcrum the arc behind the stumps that also featured champions fielders like Frank Woolley, James Seymour, James Mason, and Kenneth Hutchings.

Huish finished his career 934 catches and 377 stumpings. His 1,311 wicketkeeping dismissals are sixth on the all-time list, and most among those who never played a Test. In fact, his 377 stumpings are next to only Les Ames’ tally of 418.

And yet, the Test cap never happened. Despite his immense success in pre-World War I cricket, he was never named a Wisden Cricketer of the Year either. He played only once for Players against Gentleman in the most prestigious contest of the era. Something must have been indeed wrong with English cricket of the era.

In all Huish played 469 matches for Kent, seventh on the all-time list. For them he took 70 dismissals in a season 9 times (the others had a mere 11 between them). His 901 catches and 352 stumpings both remain Kent records.

Huish was also the first in a series of great wicketkeepers to play for Kent. Champions like John Hubble, Ames, Hopper Levett, Godfrey Evans, Alan Knott, and Steve Marsh carried his legacy for decades. It was because of him that Hubble never got a proper run for Kent till he was forty.

In an era when cricket in England was dominated by amateurs, the professional Huish was respected universally as he grew in stature in Kent cricket. Such was his control over his colleagues that “no brother professional dared to ask for a catch at the wicket” (Wisden) when Huish did not appeal.

Then there was that dismissal of Reggie Duff at Canterbury in 1902, when the Australians played Kent in a tour match. Huish was standing to Bill Bradley, who could be genuinely quick off the pitch.

Duff edged one, and the ball rolled along the ground behind the stumps. Monty Noble set off for a single. Huish made it to the ball, and realising that he would not be able to run out Noble if he stooped to pick it up, kicked the ball hard. The ball missed the stumps, Noble was safe — but Duff was not, for Huish had kicked the ball so hard that it hit the stumps at the other end, running out Duff!

Morice Bird won the toss, and Surrey batted first at The Oval. It was a grand occasion, for it was the benefit match of Bert Strudwick, the legendary Surrey wicketkeeper. Kent included both Huish and Hubble, the latter playing as a specialist batsman.

Rains kept interfering with the proceedings, and the hosts reached 111 for 9 by stumps on a gloomy day, Colin Blythe taking 8 of the wickets. Things improved slightly the morning after, when Strudwick himself and ‘Razor’ Smith added a crucial 34 before falling to Douglas Carr.

Both Blythe and Douglas Carr bowled unchanged throughout the innings. Carr finished with 8 for 67. Four of these wickets (Jack Hobbs, Andy Ducat, Harry Bush, and Ernest Kirk) were stumpings, but Huish’s role in the match was far from over.

Kent began well, reaching 68 for 2 before Smith took the batsmen out one by one. They were reduced to 92 for 8 by stumps on yet another rain-affected day, and were bowled out for 107 next morning. Just like Blythe and Carr, Smith and Kirk bowled unchanged as well, the former returning astonishing figures of 31-16-31-8.

The 38-run lead was marginally more than the last-wicket partnership between Strudwick and Smith.

Surrey lost their champion openers (Tom Hayward and Hobbs) early. The score at that stage read 8 for 2. Huish had opened his account, stumping Hayward off Carr.

But Ernie Hayes and Ducat dug in, adding a valuable 44 for the third wicket. A desperate Hutchings turned to the left-arm spin of Woolley. The partnership was broken, and Woolley ran through the rest, with 7 for 9 as Surrey crashed to 63.

Of course, he found an able ally in Huish. He stumped Bush, Bird, and Ion Campbell, all off Woolley, to level Ted Pooley’s existing world record of 8 stumpings in a First-Class match. Then, with the stumping of Kirk off Blythe, he set a new world record, and caught Hitch off Woolley for good measure.

7 or more stumpings in a First-Class match

There was more to the match, of course. Surrey’s low score meant that Kent had to score a mere 102. Arthur Day and Edward Humphreys gave them the perfect start, adding 34 for the opening stand.

Then Humphreys was run out, and Hayes, coming first-change, dismissed Seymour. Smith (5 for 33) and Kirk (3 for 33) ran through the rest as Kent were bowled out for 92, losing by 9 runs. 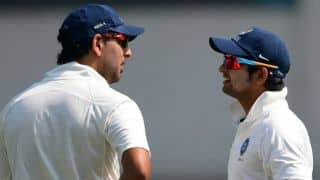