Yes, there is a version of the sport called French Cricket, and it is quite weird.

Despite no apparent connection to the sport, the French had managed to get their name in the chronicles of cricket. Abhishek Mukherjee looks at a not-too-popular version of the sport.

Er, France and cricket? True, they were one of the participants in the only time cricket had been a part of the Olympics; there have been the likes of Andy Ganteaume, Bruce Pairaudeau, and the Benaud brothers (all of who are French); and there is the edge that passes between the pads and the stumps that is often referred to as the French cut (as well as the Chinese cut and lemon cut). But French Cricket?

The rules of the sport are somewhat unusual:

– There should be at least four players.
– The players stand in a circle with the batsman (chosen by lottery of some sort) at the centre.
– There is no wicket; the legs of the batsman are used as stumps.
– A tennis ball is usually used.
– A tennis racquet is often used (in fact, preferred, given the nature of the sport).

There are often variations added by seasoned “French cricketers”: some add one-drop-one-hand catching to French cricket (these are in addition to normal catches; if a fielder uses one hand to catch a ball on the bounce, the batsman is given out); in some other versions the bowlers are allowed to switch from underarm to roundarm at will; and so on; in some others, they can move as long as the ball does not reach a fielder.

Finally, some other versions have the provision of scoring runs — counted by the number of revolutions a batsman makes with the bat held in his hands if he hits the ball and the ball has not yet reached a fielder.

Simple, is it not? When are you having your next French cricket match, then? 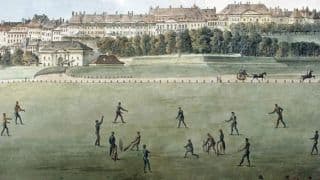 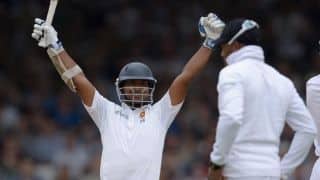