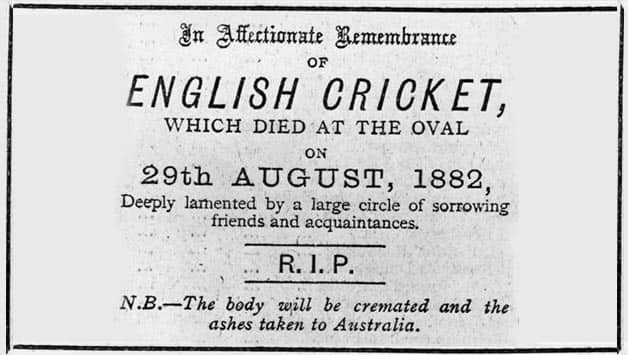 The Ashes as we know them began after Fred Spofforth’s venomous deliveries scorched the English batting at The Oval in 1882. The innings went up in flames, ending at 77 when only eight more remained to win.

In the press, the death rattle sounded loud and clear. In Sporting Times, the youthful journalist Reginald Shirley Brooks, writing under the pseudonym Bloobs, composed the mock obituary.

Yet, cricket between the two nations had already been played for long. The two countries had contested ever since 1861.

First ever tour — abandoned due to political reasons

John Sackville, the 3rd Duke of Dorset, was a decent enough cricketer, and held the post of ambassador to France from 1783. However, his main interest was gambling, and it was this fascination for staking money that really drew him to cricket. Yes, the game was a real attraction for match fixers and punters even in those days of the glorious past.

In 1786, the first instance of a cricket match was reported from Paris, played between the resident English gentlemen in Champs-Elysées. Within the next few years, cricket started becoming popular in France, even replacing horse racing as a preferred sport. The Duke arranged for a team from England to tour France and play mainly against the local English gentlemen.

The visit, the first ever foreign tour, was scheduled to take place in 1789. Unfortunately, France soon got busy with more pressing matters — with Maximilien Robespierre and the Jacobins being the main players. Guns and guillotine took over and bats and wickets were abandoned. The assembled English cricket team got as far as Dover, and then the first-ever cricket tour also became the first ever to be abandoned due to political reasons.

Shaped by the Civil War

It was another 70 years before the first tour actually took place. And instead of crossing the small English Channel, the men under Nottinghamshire professional George Parr traversed the Atlantic and played in North America in 1859. Yes, United States and Canada, soon to be incorrigibly addicted to baseball, ice-hockey and their own version of football, were gripped by cricket fever for a while. The game Parr’s team played in New York was supposedly watched by 10,000 people — and the following match in Philadelphia drew a larger crowd. The players made a good amount of money as well.

The destiny of cricket, already affected by the French Revolution, was now shaped by yet another great turmoil. In 1861-62, with North America being rendered out of bounds due to the raging Civil War, the cricket tour organisers turned their attention to Australia. This pioneering visit was also a kind of curious substitute.

What the dickens should we do then?

Felix William Spiers and Christopher Pond were the partners of Spiers and Pond — a company that ran Café de Paris in Melbourne. The entrepreneurs tried to interest Charles Dickens to visit Australia and conduct a few lectures. They say travel is invaluable to writers, but the great English novelist was not interested in the long journey. He was already hugely successful and was riding on the crest of fame at that time, having recently turned the French Revolution into the backdrop of a novel with A Tale of Two Cities.

Hence, as a replacement feature, a team of English cricketers captained by HH Stephenson of Surrey sailed from Liverpool on The Great Britain and docked in Melbourne on October 20, 1861. The first England team to Australia had arrived.

It was a weak side, with George Parr and the other leading professionals refusing to accept the offered £150 for the tour. The team played a number of matches against local sides. They also divided themselves into two to play The World versus Surrey XI at Melbourne, which was later acknowledged as a First-Class game.

Two years later, Parr, the six-hitting Nottinghamshire man, led the next team to the land of the Antipodes in 1863-64. The sole amateur cricketer in the squad was EM Grace, the elder brother of WG. Matching him in the grandeur of family name, if not cricketing skills, was the Surrey cricketer Julius Caesar. Parr’s side played 14 matches, of which one is now recognised as a First-class fixture.

Most of these tours, right up to the brink of early Test matches, saw the English elevens confronted by congested fields of anything from fifteen to twenty two opponents. But, the throngs who were fielded as teams were seldom good enough to take on the visitors.

At the same time, the standard of cricket was strikingly improving in Australia. Some of the English professionals, the likes of Charles Lawrence, Billy Caffyn and Sam Cosstick stayed back after tours to coach the Australians. Other coaches of the stature of Billy Greaves and George Marshall were hired from England. Newspapers were also following and reporting local games. Interest levels were high.

In the summer of 1868, coach Lawrence took a team of Australian Aboriginals to play in England. This was the first ever organised Australian cricket tour to England.

It must be mentioned that it was designed more as an entertainment package than a serious cricket tour, tapping on the curiosity generated by Aboriginality to attract spectators. The star cricketer of the side was Johnny Mulagh — traditional name Unaarrimin — a stylish batsman and a handy bowler. Wicketkeeper Bullocky was supposed to be as good with the bat as Charles Bannerman and as brilliant behind the stumps as John Blackham. The names of the other cricketers were indigenous — Dick-a-dick, Sundown, King Cole, Red Cap, Twopenny, Jimmy Mosquito, Tiger, Jim Crow. Sadly during the tour King Cole passed away from tuberculosis and was buried in Tower Hamlets in London. Sundown and Jim Crow went home early because of ill-health.

There was a lot of interest around the team, especially due to controversies and conjectures raised by The Origin of Species by Charles Darwin. The book had taken the world by storm when published nine years earlier. Now with such an exotic group of cricketers around, people thronged to watch them in action or even when not playing.

The Aborigines also performed side demonstration of boomerang and spear throwing — generally at the conclusion of a match. Dick-a-Dick had the neat show of warding off cricket balls thrown at him by the public with a primitive shield.  There was also a cricket ball throwing contest, where the Aborigine champions were narrowly beaten by a strapping, bearded 20-year-old called WG Grace.

The Times was not very charitable in their first impression, remarking that the visitors were: “a travestie upon cricketing at Lord’s… the conquered natives of a convict colony.”

The Daily Telegraph wrote off Australia as a country from where, “nothing of interest comes… except gold nuggets and black cricketers.”

However, the matches were popular, mainly due to the fascination surrounding these curious men. As many as 20,000 flocked to some games. But, even the newspapers were more concerned with the cricketers rather than their game. According to The Times: “Their hair and beards are long and wiry, their skins vary in shades of blackness, and most of them have broadly expanded nostrils. Having been brought up in the bush to agricultural pursuits under European settlers, they are perfectly civilised and are quite familiar with the English language.”

The words of The Daily Telegraph can be shocking to the modern eyes and ears, but is an accurate reflection of the era: “It is highly interesting and curious, to see mixed in a friendly game on the most historically Saxon part of our island, representatives of two races so far removed from each other as the modern Englishman and the Aboriginal Australian. Although several of them are native bushmen, and all are as black as night, these Indian fellows are to all intents and purposes, clothed and in their right minds”

However, the team fared exceptionally well. Of the 47 matches, they won 14 and lost an equal amount, drawing the rest. Mullagh scored 1698 runs and took 245 wickets. George Tarrant, a popular fast bowler of Cambridgeshire, remarked about this talented cricketer, “I have never bowled to a better batsman.”

Later that year, an English side toured North America and ended victorious against a XXII of the United States and a XXII of Canada. The team was led by Edgar Wilsher, renowned as the path-breaking bowler who changed the style of bowling from round-arm to over-arm.

Another English side toured North America in 1872. The captain was RA Fitzgerald, a popular and witty man with a famous flowing beard. However, as far as beards go, this tour contained an more illustrious one in WG Grace. Fitzgerald later documented this tour in his book Wickets in the West. 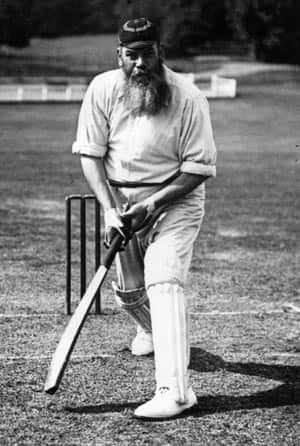 In 1873-74, after a gap of 10 years, a superb team of five amateurs and seven professionals arrived in Australia, skippered by none other than the great WG Grace himself. The captain, brother Fred Grace, Harry Jupp, James Lillywhite, James Southerton and others made a talented and interesting combination that led to great cricket and not a few sparks.

None of the matches were recognised as First Class and the most important game on the tour was played against a combined XV of New South Wales and Victoria. The Englishmen won, but the amateurs and professionals clashed repeatedly on and off the field. The former group, led by WG, often made much more money from the cricket than the professionals who officially lived off the game. This led to not a little discontent. Lillywhite’s Cricketers Companion firmly noted that it was unlikely that there would be any further attempt to mix the amateurs and professionals again.

Hence, in 1876, there were two separate initiatives to tour Australia. Fred Grace pushed for a team of amateurs while James Lillywhite started organising one for the professionals. The preparations proceeded at a similar beat before Grace’s endeavours fell through. Lilywhite’s team went on a solo tour.

It was the first team to visit Australia on a purely business venture. The professional side was well equipped with bowlers. Alfred Shaw had picked up 191 wickets that summer, heading the First-Class bowling list. Allen Hill had scalped 115, James Southerland 108 and Lillywhite himself 89.

However, in the batting department, the cream of the English willow had been left behind with the amateurs. WG Grace, Ephraim Lockwood, Richard Daft, AN ‘Monkey’ Hornby and other great batsmen were missing from the line-up, with only Harry Jupp, and to some extent George Ulyett and John Selby, lending some class to the line-up. On March 15, 1877, this motley group of men faced a New South Wales-Victoria combined eleven rather pompously called ‘United Australia’. The visitors were a tired bunch after tight schedules and non-stop touring. They without their wicketkeeper Ted Pooley, left back in prison in New Zealand because of gambling-related fights. The date of the start of the match was ominous as well, though Julius Caeser was not touring this time around. Charles Bannerman went on to score 165 before having his finger broken by Yorkshire’s George ‘Happy Jack’ Ulyett. Australia triumphed by 45 runs.

Originally billed as the Grand Combination Match, it has gone down in history as the first-ever Test match between the two nations.