Rohit has been ridiculed with copious memes on the social media.

The word “supremely talented” has, arguably, not been used so often for any international batsman as it has been for Rohit Sharma. Yet, Rohit has been a huge dilemma for Indian cricket. For such a talented player who made his One-Day International (ODI) debut in June 2007, he made his Test debut only in November 2013 well after playing more than 100 ODIs. He made a sensational debut by scoring 177 in his first outing, against the West Indies at Eden Garden, and then scored an unbeaten 111 at Mumbai in the second Test in Sachin Tendulkar’s farewell Test. Those back-to-back hundreds at a time when Tendulkar bid farewell, gave much hope for Indian cricket. Sadly, that was not to be.

Rohit Sharma’s scores in the last nine Tests reads: 14, 6, 0, 25, 72, 19, 0, 31*, 28, 6, 43, 6, 32, 0. A highest of 43 for a frontline batsman in nine innings is unacceptable by any standards. He has consistently disappointed, and done grave injustice to his own talent and to the expectation of none other than Tendulkar who felt that Rohit (along with Virat Kohli) will go on to break most of his records. Today, Rohit is struggling to keep his place in the Indian XI.

Rohit has been ridiculed with copious memes on the social media. One such is the one above, where the armless Thakur [Sanjeev Kumar] from the blockbuster movie Sholay says that had he got as many chances as Rohit, even he would have scored 20-30 runs! 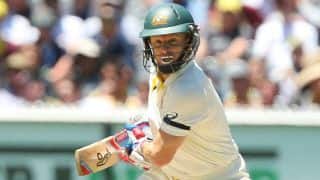