Going by India’s recent spate of results on the field, a 127-run victory, especially against a side that seemed to be brimming with unshakable confidence prior to the contest, was not anticipated. 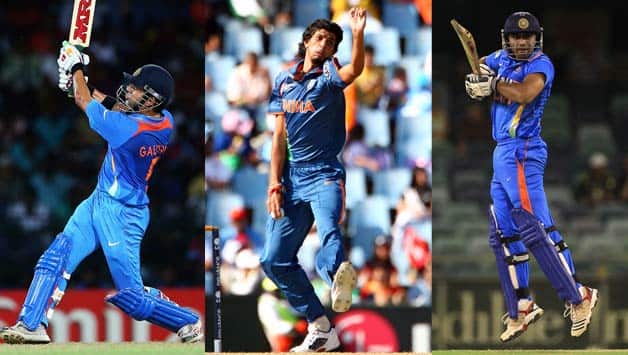 Gautam Gambhir (left), Ishant Sharma (centre) and Ravindra Jadeja need to step up to the plate in this transition period for the Indian side © Getty Images and PTI

Going by India’s recent spate of results on the field, a 127-run victory, especially against a side that seemed to be brimming with unshakable confidence prior to the contest, was not anticipated. Almost everything fell in place for the hosts. Despite a lacklustre start to the innings, the middle-order consolidated and laid a foundation for the following batsmen to finish with a flourish. The task was duly performed by Mahendra Singh Dhoni and Ravindra Jadeja, and the bowlers seemed to savour the challenge of defending a total of 285. That they dispensed a formidable English line-up for just 158 was unexpected. It was heart-warming from India’s point of view.

A victory of such proportions augurs well for India’s fluctuating morale. It’s imperative for new entrants like Bhuvneshwar Kumar, Shami Ahmed and Ajinkya Rahane to be in close proximity of a winning atmosphere, and if they can play a key role in helping to build one, there is little doubt that it could go a long way in defining the way their careers pan out.  Bhuvneshwar’s momentous spell – he accounted for three top batsmen in the form of Alastair Cook, Kevin Pietersen and Eoin Morgan for 29 runs in his quota of 10 overs – is emphatic proof of his abilities as a frontline bowler. Handling the new ball with relative ease, in the absence of a seasoned campaigner like Zaheer Khan, speaks volumes for the youngster’s promise.

Despite the win, Dhoni was quick to point that the batting department is not able to convert starts into a big innings and that the bowling doesn’t have the same firepower it did a couple of years ago. Although the youngsters are bowling their hearts out, the fact remains that the attack is still frail. It could well be a force to reckon with in due course of time, but for that to happen, someone needs to spearhead the pack.

Ishant Sharma was touted to be the one who could fill Zaheer’s shoes. Having played 47 Tests and 52 One-Day Internationals (ODIs), one would have expected him to take over from Zaheer as the side’s principal strike bowler. But injuries have hampered his progress and seldom has he bolstered the attack upon return. His recent efforts against Pakistan were noteworthy, but his performances in the first two ODIs of the ongoing series against England show signs of a relapse. He has bowled 12 overs for 114 runs in the two games.

Ishant is not yet 25, but has already been through the rigours of international cricket and knows what it takes to succeed on the big stage. India never had a pool of fast bowlers to choose from, and it is for this reason that he is often drafted back into the side despite being consistently inconsistent. The time has come for him to the lead. And it’s important he pulls his socks up. Moreover, there is no dearth of help or advice from the alumni, should he seek any.

On the batting front, Gautam Gambhir mirrors Ishant’s predicaments. Although the former’s slump isn’t as deep as Virender Sehwag’s, the fact remains that this Delhi opener too has been quite inconsistent. His century in the Asia Cup last March was followed by scores of 11, 0 and 3, and while he made merry in the series against Sri Lanka soon after that, he failed against Pakistan last month, registering scores of 8, 11 and 15. Despite scoring 52 in as many balls during the Rajkot ODI, he looked fidgety at Kochi and succumbed after scoring just eight.

The middle-order, too, has housed a couple of inconsistent players during recent times. While Rohit Sharma has grassed almost every opportunity presented to him, Jadeja has been quite sporadic. His performance in the second ODI at Kochi can be used as a platform to get to the next level. It became evident during his knock of 61 from 37 balls that he possessed the ability to be a fierce competitor at this level. Prior to this game, it appeared as though he seldom put a price on his wicket and wasted many an opportunity with the bat. Dhoni’s presence at the other end was certainly a factor. With constant inputs from his skipper, Jadeja did not just resort to bludgeoning the ball. He manoeuvred and defended according to the situation and was in complete control of his innings. If he can manage to replicate such knocks more often, there is little doubt that he can be a valuable asset at No.7 in the limited-overs format.

There is no denying the fact India is a side in transition and its results by all means could depict a sinusoidal waveform. Youngsters must be given a longer run, but inconsistent players who’ve been around for a while need to step up to the plate. Their performances could be vital during this realignment phase.