Dravid and Ganguly, face the tough task of plotting a remarkable recovery for Rajasthan and Pune respectively. Both have their share of problems, though contrasting in nature. Ganguly issues are more personal as he isn’t at his best with the bat, while Dravid’s problems are leadership-centric. 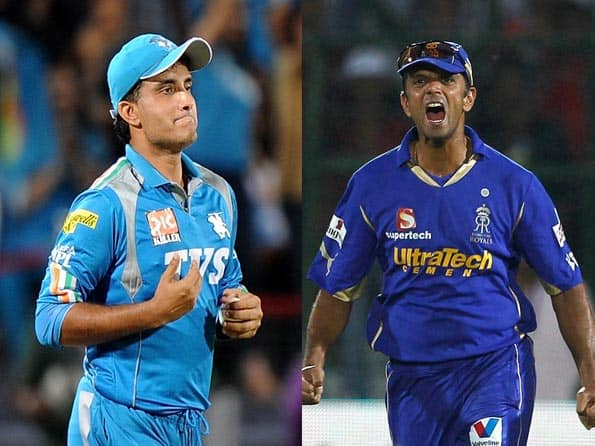 Sourav Ganguly (left) and Rahul Dravid looked to emulate Shane Warne’s exploits at the start of the season, but they have faltered and havent been able to maintain consistency © AFP and PTI

A vicious cycle of defeat has engulfed the Rajasthan Royals and Pune Warriors India – two teams that kicked off the Indian Premier League (IPL) 2012 with a bang. Rahul Dravid and Sourav Ganguly, the two men who led India to unconquered heights in the 2000s, face the tough task of plotting a remarkable recovery for Rajasthan and Pune respectively. Both have their share of problems, though contrasting in nature. Ganguly issues are more personal as he isn’t at his best with the bat, while Dravid’s problems are leadership-centric.

Firstly, one mustn’t forget that the Pune and Rajasthan aren’t the strongest sides around and do not boast of having many heavyweights in their ranks like some of their counterparts. However, Rajasthan Royals’ triumph in 2008 proved that inspirational leadership can transcend the mental barriers and blend a relatively weaker team into a formidable force. While Dravid and Ganguly looked set to emulate Shane Warne’s exploits at the start of the season, they have faltered and haven’t been able to maintain consistency.

Some of the decisions taken by Dravid have been surprising, to say the least. His strategies regarding team selection have been baffling as underperforming players have been persisted. Amit Singh and Sreevats Goswami, in particular, have done nothing of note and yet have featured in nine out of the ten games Rajasthan have played so far. Their track records for this season reflect their struggle – something that the Rajasthan team management have turned a blind eye to.

Goswami is a promising wicket-keeper batsman, but talent alone cannot help one hold on to a place in the eleven. In five innings, he has scored 66 runs at an average of 16.50. A strike-rate of 103.12 in particular is the most worrying. He has batted at the top order in most of his outings without doing much damage. In the game against Deccan Chargers, he was replaced by Dishant Yagnik, who responded by finishing the game in style. That performance wasn’t enough as Goswami returned for the next game. Considering the temperament shown by Yagnik in his first game this season, he should have been given a longer run in the side.

Coming to Amit Singh, it is astonishing that a bowler going at an economy rate of 9.44 still manages to hold on to his place. He has picked 10 wickets in nine games, but those scalps have come at a very high cost. It is clear that his bowling is hurting the team – the most pertinent example being his last over against Delhi Daredevils at Feroz Shah Kotla which was the ultimate difference between the two sides. Dravid has to look at these shocking numbers before Rajasthan take the field again.

Low strike-rates of Ganguly and others

If one looks at the scoring rates of the Pune batsmen during the ongoing IPL, one would find that Ganguly, Robin Uthappa and Marlon Samuels haven’t matched some of the brilliant strike-rates of their team-mates. Uthappa is a reputed T20 batsman who can score runs at a very brisk rate, but a strike-rate of 119.60 isn’t something one would expect from a destructive player of his caliber. He is amongst the top run scorers in the tournament with 305 to his name.

If one keeps Uthappa’s strike-rate in perspective and compares it to the other successful openers of this competition such as Virender Sehwag, Gautam Gambhir and Ajinkya Rahane, one can fathom the magnitude of the problem. The four men are in the loop to open the batting for India in the ICC World T20 later this year and the trio’s tremendous rate of scoring has certainly pushed them ahead of Uthappa. Although Uthappa has batted lower down the order in the last few games, he isn’t doing himself any favours with such performances.

It has become clear with the passage of time that it is Ganguly’s captaincy that is keeping him in the side. There have been the occasional flashes of brilliance where he has shown the glimpses of the glorious past. However, those shots have been few and far in between. He ambles along at a very slow rate scoring occasional boundaries. His two knocks of note – 41 against Delhi and 45 against Deccan – weren’t brisk as he consumed quite a few deliveries. Furthermore, running between the wickets has never been his forte and at the age of 39, he isn’t getting any quicker. One can see a lot of indecision in his running as the partner is left stranded many a times.

Had it been any other player, the management would have had no hesitation in dropping him. Pune have to ask themselves the question whether the decision to play Ganguly is an emotional one or is there any cricketing logic behind it. As a leader, one cannot question his reliability, but as a batsman he isn’t the same force he was a few years ago.

It would be foolish to write off a fighter like Ganguly who has always shown the right spirit to battle the odds stacked against him. Whenever there have been questions about him, he has responded strongly and made the critics eat their words. A revival from his side cannot be ruled out, but does he have the steam to do it once more?

If Pune are to succeed in this tournament, Ganguly, Uthappa and Samuels need to lift the tempo. The other main batsmen in their line-up have all scored above the 129 mark. Uthappa and Ganguly in particular have to improve as they bat at the top of the order and have to set the tone for the batting to follow. Ganguly coming in at No 3 has the responsibility of maintaining the scoring rate and not clogging one end up. The 30s and 40s scored by him have to come at a much faster rate so that it helps Pune put up better scores on the board.

IPL 2012: Undaunted Rahul Dravid focuses on getting back to winning momentum