Garry Sobers: I saw Ravindra Jadeja playing on television and was struck by his technique

Garry Sobers: I saw Ravindra Jadeja playing on television and was struck by his technique

The legendary all-rounder was impressed by Ravindra Jadeja.

England were back in the match at Lord’s against India in the second Test with three quick wickets before they ran into Ravindra Jadeja — an innings that brought Sir Garry Sobers on his feet. Humjee Break-Sheikh narrates what went through the legend’s mind as he watched Jadeja take on England’s best.

Eight days short of his 78th birthday, Sir Garry Sobers strode impatiently down his living room. Had the men who had watched the legend launch furious onslaughts on the finest attack of all time been around, they would have recognised the stride: the lithe swagger was unmistakable. The great man looked tense.

Was what I witnessed true? Should I tell Pru?

More incensed than anything by the fact that his thoughts had rhymed — an attribute that was usually assigned to lesser mortals — Sir Sobers made the decision to wake up Pru Kirby, only to realise that they had divorced 24 years earlier. He went back to his television set, the gigantic box that brought him live satellite feed from Lord’s where he witnessed the young talent unfold.

Unable to conceal excitement, he made frantic calls and asked the same question to everyone. They all turned their respective television sets on and nodded in unison. Then it dawned on that he had to tell the media about his realisation.

He called up this correspondent: “I saw him playing on television and was struck by his technique, so I called up my friends to look at him. Now, I never saw myself play, but I felt that this player is playing with a style similar to mine, and they looked at him on television and said yes, there is a similarity between the two — his compactness, technique, stroke production — it all seemed to gel.”

When Ravindra Jadeja eventually got out, I had to agree to what the legend had said. They were right when they called him The Second Sobers. 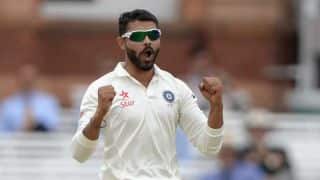