In Kuala Lumpur, of all places, Garry Sobers ran through the hosts with 5 wickets in 5 balls on March 28, 1964. Abhishek Mukherjee takes a look at an oft-forgotten amazing feat.

Though he remains, in the eyes of most, the greatest all-rounder ever, witnesses regard Garry Sobers the batsman in the highest esteem: they often call him more destructive than Viv Richards, lither than Brian Lara, more devastating than Sachin Tendulkar, and more emphatic than Greg Chappell.

His bowling, just like WG Grace’s and Jacques Kallis’, has often taken a backstage as they assess his abilities. Indeed, a Test average of 34.03 hardly speak highly of a man of his calibre, and his ability to bowl fast, medium-paced, finger-spin, and wrist-spin have often been shrouded by numbers.

Yet, in an unofficial match that day at Kuala Lumpur, he did something that has rarely been replicated in any form of the sport.

They played a few matches at Penang and Singapore before moving to Kuala Lumpur. In the first match at the ground against Selagnor (a one-day encounter), Swanton’s XI scored 159 before Sobers and Piachaud bowled out the tourists for 99. The match, however, ended in a draw. The next match was scheduled against Malaysia.

The tourists batted first, and Nurse put up 68 for the opening stand with Taylor before Alex Delilkan bowled the Yorkshireman off his pads. This brought Sobers to the crease, and the crowd was taken by both surprise and joy as the first ball spun past Sobers’ outside edge and pegged the off-stump back.

The hat-trick was saved, but it took a 61-run ninth wicket stand between Mike Griffith and Piachaud to take the score to 211. Steve Houghton went out to open with Ranjit Singh; Sobers ran in to bowl to the former, and three balls passed by harmlessly.

Houghton was caught by Colin Ingleby-Mackenzie off the fourth ball of the over close to the wicket. M Sidek was trapped leg-before next ball; Mike Shepherdson (one of the three Shepherdson brothers who formed the backbone of Malaya cricket during the era: Christie and David were the other two) walked out, but could not save the hat-trick. He was caught by Ingleby-Mackenzie.

Hutton conceded 3 off the next over, of which John Martens, the new batsman, managed a single: he would be on strike now. Sobers, with a hat-trick already under his belt, made it 4 in 4 as he ran through Martens’ defence. Poor Gurucharan Singh was bowled next ball, to make it 5 in 5. Sobers’ figures read 1.2-1-0-5.

There was not much of a battle from there. Sobers was taken off after figures of 4-3-2-5, and Ramadhin ran through the rest, bowling them out for 108 as Ranjit Singh valiantly stood at one end, carrying his bat with 56. Nurse’s 40 left the hosts with a target of 234 (Sobers failed again, scoring a single).

Sobers bowled Houghton early again, but finished with 1 for 18. The hosts, however, were no match to the off-spin of Piachaud, who ran through them with 5 for 12. They crashed to a 130-run defeat.

[Trivia: Alan Davis stood as an umpire in the match. His son Charles is arguably the greatest contemporary cricket statistician.]

– After playing another match at Kuala Lumpur, the visitors played 3 matches at Hong Kong and one more at Bangkok before coming to India.

– Their only First-Class match of the tour was against an Indian XI at Eden Gardens, where Pataudi played for Swanton’s XI. Sobers took 6 for 63 and 3 for 78 and scored 123, but the tourists were left to score 243 for a victory against Ramakant Desai, Bhagwat Chandrasekhar, Bapu Nadkarni, and Chandu Borde. Nurse solved the situation by slamming 135 not out. With some help from Benaud, the tourists won by 7 wickets. 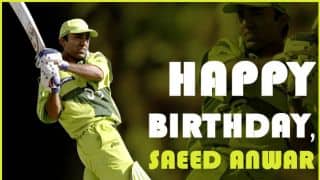