Gautam Gambhir: 18 facts about Indian batsman who excelled when it mattered the most

Gautam Gambhir: 18 facts about Indian batsman who excelled when it mattered the most

Born October 14, 1981, Gautam Gambhir is a left-handed batsman who has served the Indian cricket team mainly as an opener. A fiercely combative cricketer, Gambhir has played vital knocks in India s recent World Cup wins in 2007 and 2011. An elegant southpaw, Gambhir leads Delhi and the Kolkata Knight Riders in domestic cricket. Chinmay Jawalekar presents 18 facts about the player, who has proved his leadership skills by successfully leading the domestic teams as well as the national team for a brief period.

1. Early life: Gambhir was born in New Delhi to a businessman father and a housewife mother. He was adopted by his grandparents when he was 18-days old and has lived with them ever since. He started playing cricket at the age of 10 and was coached by Sanjay Bharadwaj and Raju Tandon.

4. One-Day International (ODI) debut: In the early 2000s, Gambhir s name started doing the rounds for selection to the Indian team. He scored two consecutive double-hundreds in 2002 and one of them came against the visiting Zimbabweans. He soon made it to the Indian ODI team and made his debut against Bangladesh in 2003. In only his third match, his score of 71 earned him the Man of the Match award.

5. Test debut: Gambhir made his Test debut against Australia in the fourth and the last Test match of the Border-Gavaskar Trophy 2004 in Mumbai. Though he failed in both the innings by getting dismissed for 3 and 1, Indian went on to win the low-scoring thriller by 13 runs. He was being persisted with and he made amends in his second Test by scoring 96 against South Africa. His maiden Test ton came against Bangladesh in his fifth Test, when he scored 139.

6. ICC World T20 2007: Gambhir wasn t picked for the ICC Cricket World Cup 2007 in the Caribbean, something that de-motivated him. However, India s poor showing at the World Cup saw him make a comeback immediately. Later that year, when India went on to win the inaugural ICC World T20, Gambhir was the highest scorer for India and the second highest overall. He scored 227 runs from seven matches at 37.83 at a strike rate of 129.71. His match-winning 54-ball 75 in the final against Pakistan helped India lift the title.

8. Marathon Test knock: In March 2009, Gambhir played a career-changing knock against New Zealand in Napier to save the Test for India. He scored 436-ball 137, a match-saving 643-minute marathon. No man batted longer than him in the second innings in the first decade of the 21st century. It is also overall the fifth-longest effort in second innings in Test cricket.

9. Captaincy of Indian team: In 2010, Gambhir was appointed as the stand-in captain of the national team for a home ODI series against New Zealand. He scored an unbeaten 150 in the fourth match in Kolkata, leading the team to a victory in the run-chase. He eventually earned the Man-of-the-Series award and led India to a 5 0 win.

10. ICC Cricket World Cup 2011: India won the 50-over World Cup after a long wait of 28 years in 2011. What made it more special was that the win came at home. Gambhir was once again instrumental in India s win. Playing at one down, he scored 393 runs from nine matches at an average of 43.66. He was the sixth highest scorer of the tournament and second highest for India behind Sachin Tendulkar. In the final, Gambhir s 97 from 122 balls set up India s successful chase. Coming in to bat in the first over after the dismissal of Virender Sehwag, he led India s reply and had useful partnerships first with Kohli, and then a match-winning partnership of 109 with MS Dhoni.

11. Drop in form and out of team: Post 2011, Gambhir witnessed a sharp decline in his form. He did not do well in India s overseas Test losses and was soon dropped from the Test team in 2012. He was called back for India s disastrous tour of England in 2014, but could manage only 25 runs from four innings and was dropped again. He last played a Twenty20 International (T20I) for India in 2012 and an ODI in January 2013 and was out of favour for India selection since. But a good IPL 2016 followed by a terrific Duleep Trophy saw him named in India’s Test squad for New Zealand series after regular opener KL Rahul was rued out with an injury after first Test. Shikhar Dhawan played the second Test at Kolkata but an injury to him meant Gambhir was named in the XI for Indore Test. He walked out to bat to a rousing reception and scored 29 and a fifty in the match where he struggled with his right shoulder.

12. Indian Premier League (IPL): When the IPL started in 2008, the Delhi Daredevils bought Gambhir. He played reasonably well for the franchise and even led them. In 2011, the Kolkata Knight Riders (KKR), a side that was unlucky thus far, purchased him. Gambhir changed its fortunes and took them past the group stage in his first outing as their captain. Next year in 2012, he won the maiden IPL trophy for his team. He led KKR to their second IPL trophy in 2014.

13. A fierce competitor: Gambhir has been a fierce competitor on the field. He carries his emotions on his sleeves and doesn t shy away from engaging in an altercation. His famous on-field spats include the one with Pakistan s Shahid Afridi and his India and Delhi team-mate Virat Kohli. He was involved in a bitter-exchange with Afridi during an ODI whereas with Kohli during the IPL.

14. Mentor: Gambhir considers his maternal uncle Pawan Gulati as his mentor. He has stayed at his place when he was learning his cricket in the 90s and still calls him up before important matches.

16. Awards and recognition: Gambhir was conferred with the Arjuna Award, India’s second highest sporting award in the year 2008 by the President of India. The following year, he was the number one ranked batsman in ICC Test rankings. The same achievement earned him the recipient of the ICC Test Player of the Year award.

17. 11 fifties in a row: Gambhir held a prestigious record of posting 11 50-plus scores in Test cricket. Prior to him only Viv Richards had achieved that and after him his opening partner Sehwag matched this feat. Later, in 2014, AB de Villiers eclipsed this record when he posted his 12th consecutive fifty.

18. Who wants to be a millionaire: Gambhir, an admirer of Sourav Ganguly, appeared in a reality TV show with the latter. In 2011, Ganguly was roped in as the host of the Bengali version of Who Wants to be a Millionarie , called Ke Hobe Banglar Kotipoti . Gambhir appeared as a guest in the show and won INR 25 lakhs. 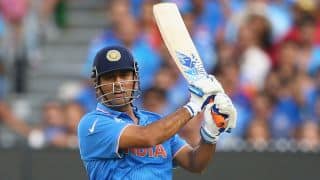 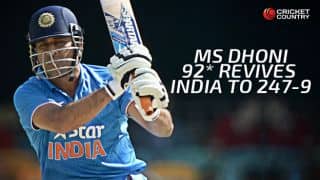