September 4, 1965. When Yorkshire took field in the Gillette Cup Final against Surrey in 1965, the Lord s crowd probably expected a keen contest. Unfortunately, it turned out to be a rather one-sided affair, thanks to some uncharacteristic biffing from the most unexpected of sources. Abhishek Mukherjee looks at an outrageously strokeful hundred from, of all people, Geoff Boycott.

There is no typo in the title of the article. This is indeed about a day when Geoff Boycott went haywire; he took the strong Surrey attack on at Lord s, shredding them to ribbons; he scored an outrageous hundred that hit Surrey so bad that they could not equal his personal contribution. Yes, it was an innings of a lifetime not because it was a great innings, but because it was a limited-overs match set up by the blade of Boycott.

Limited-overs cricket was in its nascent stages. A mere two years had passed since Lancashire had beaten Leicestershire at Old Trafford in the first List A match ever. Gillette Cup 1965 involved 22 teams, including Minor Counties, and neither Surrey nor Yorkshire needed to play the elimination match.

Middlesex amassed 250 for 8 from 60 overs in the semi-final at The Oval, and though Surrey were reduced to 169 for 5, Ken Barrington and Mike Edwards saw Surrey home. The other semi-final, at Edgbaston, was a closer affair: after being bowled out for 177, Yorkshire were almost out of the contest when Warwickshire reached 64 for 1; then wickets kept falling, and when all seemed over, the tail wagged a bit; but eventually Yorkshire prevailed by 20 runs.

Boycott s blitzkrieg (no typo there)

Boycott had scored 2,110 runs at 52.75 the previous season and was named Wisden Cricketer of the Year the previous season. He was already hailed as one of the finest openers in England, but aggression was certainly not among his plus points.

He had a decent, but not outstanding, Gillette Cup 1965 till then, with 56 against Leicestershire at Grace Road and 23 not out against Somerset at Taunton (Yorkshire were chasing a mere 64). There was, however, no indication of what was to follow.

The final was played almost two months after the semi-finals. There was a thunderstorm the previous evening, but the new drainage system at Lord s meant that the ground was ready for the match after an hour s delay.

Yorkshire were a formidable outfit: led by Brian Close, the side consisted of Boycott, Ken Taylor, Fred Trueman, Don Wilson, Doug Padgett, Phil Sharpe, Ray Illingworth, and Jimmy Binks all of whom had played Test cricket by then. The other two, John Hampshire and Richard Hutton, would go on to earn Test caps as well.

Surrey, on the other hand, boasted of only three in Micky Stewart (the captain), John Edrich, and Barrington, though Geoff Arnold would play Test cricket in future.

The conditions were overcast in St John s Wood that morning. The outfield was damp and slow. Stewart decided to bowl in front of a 25,000-strong crowd. Boycott and Taylor opened batting. Arnold and David Sydenham bowled to a perfect line, conceding a mere 22 from the first 12 overs. Then Taylor gave Barrington an easy catch at gully off Sydenham.

Close promoted himself up the order, ahead of Padgett. This was only the 60th List A match: pinch-hitters were a concept of the future. But Close knew exactly what needed to be done: not only could he take the bowlers on, but was also a left-hander who could take Sydenham on. Boycott was, as Eknath Solkar would testify, never comfortable against left-arm seam.

Boycott later told Simon Lister of The Wisden Cricketer that Close s promotion was not an impromptu decision. He was the only left-hander among the recognised batsmen, and the entire promotion had been planned a fortnight in advance.

There was a marked change in Boycott s approach shortly after Close s arrival. There were speculations that Close had asked him to accelerate, but Boycott has denied it vehemently in Boycott: The Autobiography: The suggestion is, of course, that I was piddling along until [Brian] Close arrived and told me to get on with it or else, thus forcing me to play a memorable innings, which would not have been possible without his rugged intervention. It makes for good reading but it is not the way I remember it at all.

Close had a reprieve when on 3 as a snick off Gibson flew between first and second slips. He never looked back. As was typical of him, tested Boycott with a few sharp singles, putting pressure on the Surrey fielders. Then Close walked up to Boycott, giving him full license. And Boycott docile, defensive, bespectacled Boycott exploded.

They bowled short. He cut and pulled. They over-pitched. He drove past cover-point and mid-wicket. Gibson and Sam Storey, the change bowlers, could not contain him. Yorkshire, after being 22 from 12 overs, managed 87 from the next 18 but the fun had just begun.

Stewart turned to the off-breaks and Ron Tindall and the leg-breaks of Barrington. Boycott, despite his bravado, was reluctant to loft the spinners. It took some coaxing from Close, but when Boycott responded, the two part-timers vanished into oblivion. Close contributed as well, and between them the pair conceded 90 from 8 overs.

Thankfully, though these were 60-over contests, the over-limit for the bowlers was 13 overs; 8 overs were all Stewart needed from his spinners.

Close scored 79 after a 192-run stand in less than three hours and immediately promoted Trueman. The great fast bowler scored a quickfire 24.

Boycott eventually fell for 146 to Barrington, of all people. He hit 15 fours, and hold your breath three towering sixes.

Hampshire continued with the onslaught in the company of Wilson, and Yorkshire finished on 317 for 4. The last 30 overs had yielded 208. It was an unthinkable total given the era. Neither Padgett nor Sharpe, outstanding batsmen on their days, got an outing.

Stewart and Edrich added 27 before Trueman struck. He had demolished Somerset in the quarter-final with 6 for 15. This time Surrey faced his wrath: Edrich, William Smith, and Barrington all fell without the addition of a run. Stewart hung on gamely, trying one shot too many before Binks stumped him off Wilson for 33.

This was followed by a triple-blow from Illingworth. From 75 for 3 Surrey were reduced to 76 for 7. Tindall (57) was the only one to put up some fight: he added 54 with Arnold Long, but Surrey were eventually bowled out for 142 and lost by 175 runs, Illingworth taking 5 for 29 and Trueman 3 for 31. To add to their humiliation, Surrey scored 4 less than Boycott s tally.

An awestruck John Woodcock wrote in The Cricketer: I only hope that the Boycott who fastens his seat-belt at London Airport next week is the same man who made 146 against Surrey and who won the award as Man of the Match. It is quite likely that Boycott will open England’s innings for a decade to come. The prospect of his doing so in his ascetic mood is hard to entertain.

Boycott opened batting for England for over a decade-and-a-half after the final, but certainly did so in ascetic mood .

Man of the Match: Geoff Boycott. 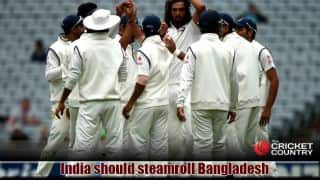 India should not face obstacles in steamrolling Bangladesh