With two days remaining in the match, victory almost certain, and Yorkshire in any case in the lower half of the county table.

September 13, 1971. Given half a chance Geoff Boycott would bat on forever. There is a recorded event of an umpire giving him out because he had seemed to bat on forever. However, on this day, with plenty of time left in the match and a win guaranteed, he suddenly declared the innings after scoring a mere 124, which left even the opponents flabbergasted. Arunabha Sengupta looks at the reason behind the declaration.

We have seen enough of him

Brian Close had been sacked as the Yorkshire captain at the end of the previous year.

That meant Geoff Boycott was at the helm, with the full license to bat on forever.

By 1978, his eighth year as the captain, the issue would reach boiling point. Against Northamptonshire in that summer, Boycott would score 113 after batting through 90 overs, not hitting a boundary till the 60th and getting stuck on 82 for half an hour. By the end of that season, John Hampshire would replace him as captain.

Yet, for the first seven years of his tenure, Boycott was the top English batsman in the championships. But, in spite of that, Yorkshire did not win, and the northerners were not happy.

Yes, he seemed to give the impression of batting on and on and on, mainly as an unhealthy personal quest to accumulate mountains of runs. In 1970, he had gone to Garrison A Ground, Colchester, and scored an unbeaten 260 against Essex when Close had mercifully declared the innings. The following year, he went there again, this time as captain, and was unbeaten on 221 at the end of the first day. At stumps, Yorkshire’s score read 347 for 1.  And our man decided to go on batting.

At 233, he faced Robin Hobbs, the leg spinner, and the ball drifted down the leg side. Boycott tried to glance, missed, and was struck on the pads. Hobbs emitted a desultory, half-hearted appeal as Boycott ran down the wicket for a leg bye. Old Sam Cook, a former slow bowler had played for England against South Africa in the summer of 1947 at Trent Bridge, was the officiating umpire at that end. And up went his gleeful finger.

“No, no, no, Sam, that can’t be out,” mumbled Boycott as he ran, and the former Gloucestershire bowler looked sternly at him and confirmed, “That’s out.” As the morose batsman dragged himself away, Cook looked at Hobbs and said, “I think we’ve seen enough of him.”

True, Boycott evoked images of eternity closing down on the ground in a claustrophobic clasp.

In this context, the last game of the season against Northamptonshire was rather surprising.

It was a difficult wicket at Harrogate. Medium-pacer Richard Hutton and the ever reliable left arm spinner Don Wilson had made short work of the visiting batsmen. They had been routed for 61 in 51.3 overs, and by the end of the first day Yorkshire had reached 195 for 2. Boycott, his usual impregnable self, was batting on 88, with Hampshire for company.

With two days remaining in the match, victory almost certain, and Yorkshire in any case in the lower half of the county table, the situation was tailor-made for Boycott to play another of his huge innings without too many questions asked. The wicket was still difficult, but he had shown no discomfort at all against Peter Lee, Brian Crump, Mushtaq Mohammad and Dennis Breakwell.

He duly crossed his century in the morning, his 13th of the season. And a while later, to the surprise of everyone at the ground, he declared at a personal score of 124. Yorkshire were on 266 for 2. Even Jim Watts, Boycott’s opposite number, could not believe it.

There was no urgency to force the issue, as was made evident in the next few hours. Northants collapsed to 106 before the close of the second day and Yorkshire won by an innings with a full day to spare.

What had led Boycott to declare the innings?

It did not mystify people for long. With the last stroke of his innings, Boycott had passed 2,500 runs in the summer, taking his tally to 2,503. More importantly, it had taken his average for the season to 100, propping it up to 100.12.

He had chosen his moment like the most astute batting accountant.

First Published on
Last updated on May 15, 2015 7:56 AM IST
TOPICS:
Moments in history England Geoffrey Boycott Yorkshire Yorkshire vs Northamptonshire 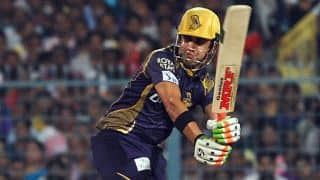