George Headley: Was he really tested by the best attacks?

George Headley: Was he really tested by the best attacks?

George Headley's First-Class average of 69.86 stands behind only Don Bradman and Vijay Merchant, but how good was he really?

George Headley was celebrated by his fans as second only to Don Bradman. Some even went to the extent to call Bradman the White Headley. However, Arunabha Sengupta tries to find out whether there is sufficient evidence to say that he was indeed better than the rest of the batsmen of his time.

Recently in these pages Abhishek Mukherjee and I combined to carry out a discussion to form an All-Time XI of West Indies. While the responses to the assembled team were mostly favourable, there were often two jarring notes.

Many did not agree with Chris Gayle’s inclusion as the opening partner of Gordon Greenidge ahead of Conrad Hunte, Roy Fredericks, and Desmond Haynes. And secondly, and far more significantly, the exclusion of George Headley shocked many, especially with Shivnarine Chanderpaul nestled at No. 6.

In retrospect, the reaction to both these choices were expected. In general we always have more than a little hesitation in accepting modern names as equals of the hallowed ones of the past. The revered names of the earlier obscure days more often than not snowball into huge proportions along their journey down the years. Hence, the choice of Gayle because of his better overseas record than Hunte, Haynes and Fredericks was bound to be challenged. However, the omission of Headley seriously scandalised many.

After all, George Headley was by far the best West Indian batsman of his times, and, by many accounts, the best in the world but for Don Bradman. Ten hundreds in 22 Tests and an average of 60.83 can hardly be contested. Even our argument that there needed to be a proven grafter like Chanderpaul in a team of superlative stroke players like Gayle, Greenidge, Viv Richards, Brian Lara and Garry Sobers did not quite go down as sufficient justification for eliminating Headley from the equation.

However, let me voice the question that is sure to shake the foundations of faith for many: Had he done enough to merit a place in the All-Time West Indian XI?

Let me start with a disclaimer. This is in no way questioning the quality of Headley’s batsmanship. As already mentioned, there is absolutely no doubt that he was by far the best West Indian batsman of his era, standing head, shoulders and waist above the others. His career First-Class average of 69.86 stands behind only Don Bradman and Vijay Merchant.  That is enough indication of his quality.

Yet, West Indian cricket is rife with examples of great masters of the willow who conquered every kind of strongest bowling attack of his day. In that respect, was Headley tested enough to get past them into an All Time XI?

Let us go over Headley’s record in minute detail.

We will consider only the pre-World War Two Tests. After the conflicts, Headley played three more and scored 55 runs at 13.75. He was way past his prime and the final appearance on popular demand at the age of 45 did not really help his cause. The 19 pre-War Tests got him 2135 runs at 66.71 with 10 hundreds and 5 fifties. How can one even dispute his greatness?

One cannot. However, one can point out that the opposition bowling he played against was most often far removed from representative standards. Headley played 14 of the 19 pre-1939 Tests against England and scored 1,799 runs at 78.21 with 8 hundreds. Let us take a look at the English attacks against whom these runs were amassed.

The first series Headley played was at home in 1929-30. The 4 Tests brought him 703 runs at 87.87 with 4 hundreds, including centuries in both innings at Guyana and 223 in the timeless Test at Jamaica.

While the deeds were phenomenal , it will be an understatement to say that the opposition was less than ordinary. The bowling of England had two names which have gone down as legendary — Bill Voce and Wilfred Rhodes. However, it was the first series of a greenhorn Voce. As for Rhodes, it was the Yorkshireman’s last series. He was still tossing them up gamely at the age of 52, ending with 10 wickets in the series at 45 each.

The Hon Freddie Calthorpe led England side had another 50-year-old in their midst, in the form of George Gunn. There were a number of amateur cricketers well into their middle ages — which makes one wonder about the speed and standard of fielding. And apart from Voce and Rhodes, the other bowlers in the team were:

Rhodes, Stevens, Calthorpe, O’Connor, Astill and Haig never played for England again after the tour. Of the 7 bowlers only Voce carried on for the Old Country.

Following this visit from England, Headley’s next Test match appearance was in Australia. Faced with the attack of Alan Fairfax, Bert Ironmonger and Clarrie Grimmett, with Ron Oxenham showing good form, he ended the 5-Test series with 336 runs at 37.33.

Arguably, this was the one series in which he faced the best possible attack available to the opposition. Bill O’Reilly had not walked on to the Test scene yet.

Headley’s next Test series was in England in 1933. The Tests were played in the gloomy aftermath of the Bodyline controversy. Immediately after crushing Australia 4-1 in their backyard with infamous tactics, the England side that faced the men from the West Indies were a depleted lot.

Of the four fast bowlers who bowled at the Australians in 1932-33, three did not play in the series. Harold Larwood’s Test career was already over. Bill Voce and Bill Bowes were also absent. Gubby Allen played, but only in the first Test — dismissing Headley in both the innings.

England had a decent spin attack, with Hedley Verity and Walter Robbins bowling in tandem, but the pace attack was less than thin.

Headley scored 277 runs in the 3 Tests at 55.40. His solitary century was a big one, 169 not out at Old Trafford. The bowling of England in that Test was opened by Nobby Clarke and George Macaulay, two men who played 8 Tests apiece for England.

In the third Test at The Oval, Clarke was partnered by Stan Nichols. Verity and Robbins were rested in favour of the 38-year-old one-Test wonder Charlie Marriott. Marriott spun England to an innings win with 11 wickets, Headley scoring 9 and 12.

The bowling of England in this series was decent, better than the team in 1929-30, but not the best attack of the country by a long stretch.

The action was back in West Indies and Headley scored 485 runs in the 4 Tests at 95 with a highest of 270 not out to earn a memorable 2-1 series win.

The England team this time was a lot better in the batting department, with Wally Hammond, veteran Patsy Hendren, Bob Wyatt and Les Ames in the line-up. However, the bowling was once again less than ordinary, with experience bordering on absolute zero.

– The vaunted England pace attack was totally absent. Larwood had, of course, been relegated into pages of history. Voce was absent as were Allen and Bowes. Neither Verity nor Robbins made the trip to hold up the spin department.
– The bowling spearhead was Ken Farnes with the experience of two Tests behind him.
– Then there were the debutants, George Paine and Big Jim Smith. Paine did not play for England again after the series. Smith played just one more Test
– Another debutant Eric Hollies, who gained lasting fame for bowling Don Bradman for a duck at The Oval in 1948, shouldered the responsibilities of spin.

The series did witness some exciting cricket, the final result in favour of West Indies. However, it remains debatable how much of a contest the matches would have been if the best England bowlers had played.

The final series of Headley in his prime was in England in 1939. In the last 3 Tests before the Second World War, he scored 334 runs at 66.80 with 2 hundreds. Of the bowlers who bowled during 1938 Ashes series, Farnes was absent and Verity played only one Test.

With the Tests against West Indies utilised to test the bench, the rookie red-headed miner Bill Copson opened the bowling in 2 Tests before 39-year-old Nichols took over in the third. The experienced Bill Bowes partnered them with the new ball.

Verity sitting out brought Tom Goddard into the frame for the second and third Tests, and the spin attack perhaps lost out on enormous Test experience but not class. However, Doug Wright with a Test average of 39 was not really the best foil to the Gloucestershire veteran.

Hence, this time around, the bowling was decent — perhaps the best English attack Headley ever faced. However, once again, it was not the best available attack.

As we have already mentioned, Headley’s post-War days will not be considered, since they were by no means a fitting post-script to a great career.

Now the question raised is uncomfortable. in spite of the great deeds of Headley with the bat, did he do enough to unquestionably prove himself against the best attacks? If we contrast the numbers of Headley with the other West Indians of his times, there is no doubt that he was in a different league. But, he got most of his runs against very ordinary attacks. In fact, during his heydays, the only time he faced a full strength bowling side his average was hauled down to the late 30s.

One cannot reach any conclusion, but it does seem a trifle hasty to say Headley was right after Bradman during his times. And perhaps he was not tested enough by the best attacks to merit a place in the All Time XIs. 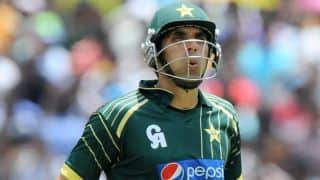