Glenn Maxwell: A bird's eye-view of the 'million-dollar baby's' record innings against India

Glenn Maxwell: A bird's eye-view of the 'million-dollar baby's' record innings against India

Australia's Glenn Maxwell took everyone’s breath away with his blitzkrieg against India in the seventh and final One-Day International (ODI) played at Bangalore on Saturday. He equalled Australia's record for the fastest half-century scored off 18 balls during his innings. Bharath Ramaraj, with a bird’s eye-view, looks back at Maxwell’s extraordinary effort. 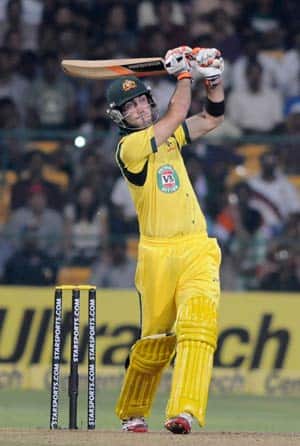 Glenn Maxwell scored an 18-ball half-century against India in the seventh ODI in Bangalore. His blitzkrieg innings of 60 included seven sixes and three fours © IANS

Australia’s Glenn Maxwell took everyone’s breath away with his blitzkrieg against India in the seventh and final One-Day International (ODI) played at Bangalore on Saturday. He equalled Australia’s record for the fastest half-century scored off 18 balls during his innings. Bharath Ramaraj, with a bird’s eye-view, looks back at Maxwell’s extraordinary effort.

In the final One-Day international (ODI) played between India and Australia, it was virtually raining sixes from everyone’s willow. Rohit Sharma’s magnificence was breathtaking to watch as was James Faulkner’s believe-it-or-not power-hitting. Another batsman who sparkled with a thrill-a-minute knock was Australia’s batting all-rounder — Glenn Maxwell.

With as many as 38 sixes being hit, it is difficult to remember too many of the wondrous shots that were smashed in the match. Yet, Maxwell’s coup de main was such that he wowed and captured the imagination of the paying public with his flamboyant, dazzling and cavalier stroke-play. It seemed like red-lightning was being generated from his willow.

In particular, during the 17th over of the match bowled by India’s beleaguered seamer R Vinay Kumar, he smoked 23 runs to send the crowd into a tizzy. When he nonchalantly walloped a length delivery from middle-stump over deep square-leg for a humongous six, it took everyone’s breath away. Poor Vinay Kumar, he would have nightmares of Maxwell’s bazooka shots for the rest of his life, as he ended up with the worst figures by an Indian bowler in ODI history as he gave away 102 runs in only nine overs.

The shots that he played of Vinay Kumar were reminiscent of England’s swashbuckling batsman, Kevin Pietersen, ripping apart Australia’s speedster Jason Gillespie at Bristol in an ODI played in 2005 in England. Just to throw in a word of caution, it has to be said that taking Gillespie to the cleaners is slightly different from making mincemeat of Vinay Kumar’s bowling.

One more shot that will be etched in an aficionado’s memory forever was when Maxwell stayed on the back-foot to lean back slightly and send a flattish delivery from Ravindra Jadeja deep into the orbit over cow corner for yet another stunning six. Even if we consider the fact that bats have improved beyond recognition, it still takes awe-inspiring skills to thump a spinner on the back-foot over deep mid-wicket. The way Maxwell made room and brutally launched Indian seamer Shami Ahmed for a six over the extra-cover region in the 21st over of the match was an eye-catching shot too.

Maxwell’s knock of 50 of a mere 18 balls also equalled the Australian record for the fastest fifty in terms of balls set by Simon O’Donnell back in 1990 against Sri Lanka in the Austral-Asia Cup played at Sharjah Cricket Ground.

The writer has been lucky enough to watch both knocks. Actually, it doesn’t make much sense to compare different eras in one-day cricket. However, when O’Donnell took a liking to Sri Lanka’s wily seamer Champaka Ramanayake, it was crystal clear that he too was extremely strong between the long-on and mid-wicket region like Maxwell.

Actually, if we turn back the pages into Maxwell’s career, it was in 2011 when he shone like a beacon with a record-breaking effort of 61 of 27 balls for Victoria against Tasmania in the 50-over Ryobi Cup. Since then, he has been earmarked for success in the international arena.

He has even drawn comparisons with England’s middle-order batsman Pietersen. It has to be said though, Pietersen, when he made his one-day debut in 2004 came on the back of averaging 50 in First-Class cricket. Maxwell, still has a long way to go to match a batsman of the calibre of Pietersen.

Maxwell is your quintessential modern day batsman who doesn’t care for what is written in a Marylebone Cricket Club (MCC) coaching manual. In short, the ‘million dollar baby’ from Victoria is here to stay for a longtime to come.

'Sachin Tendulkar's advice and motivation helped me bounce back'