Australia’s explosive batsman, Glenn Maxwell stunned the world on Sunday, October 12 when he bowled a maiden final over to snatch away victory from the jaws of Pakistan. Pakistan who needed just two runs in the final over with two wickets remaining was shell-shocked when Maxwell did the unthinkable. The question comes up — how the explosive batsman surpassed all expectations with the ball. Ayush Gupta questions whether Maxwell can be called the ideal limited-overs all-rounder following this brilliant performance with the ball.

Known mostly for his powerful hitting, Glenn Maxwell batsman attracted the selectors after scoring the fastest fifty in the history of Australia’s domestic cricket. His impressive record in domestic circuit and First-Class cricket in England earned him a national call-up in 2012 and has since been a sensation for the Australian limited-overs squad, especially in the T20 format.

Currently playing for domestic T20 teams like Melbourne Stars (in Big Bash League) and Kings XI Punjab (in Indian Premier League), he has not only been a major force but has helped the teams move ahead in the knockout rounds of every tournament also.

However, it must be noted that Maxwell just is an impressive limited-overs bowler as well. He may not be a full-time bowler. Well, not yet: but his bowling too has been impressive just like his batting of late.

He may not yet be classified as an all-rounder in the general sense of the term, but has all the abilities and qualities to be called the ideal all-rounder. Most are aware of his batting numbers and style, but not many have a fair idea about his bowling abilities. A look at the numbers can tell us more.

If we consider his performance with the ball in the T20 internationals (T20Is), Maxwell has claimed 14 wickets from 22 matches with an economy of 7.08 with an average of 23.78. His best bowling has been 3-0-13-3 against Pakistan in the recently held T20I at Dubai this year. Overall, his bowling performance in T20Is has been more than impressive.

But what about One-Day Internationals (ODIs)? From 32 ODIs Maxwell has 19 wickets at an economy of 5.41 and an average of 43.21. His best figures read four for 63 against the West Indies at Perth in 2013. In other words, he has been a competent filler with the ball in ODIs, but not exactly in the league of an all-rounder.

Nevertheless, if we look at some of his best bowling performance in the T20Is he took two for 15 against Sri Lanka at Sydney. In the next two matches he claimed two in each of the matches for 19 and 31 runs respectively against South Africa and England and. It should also be noted that in a few of the games he failed to pick up wickets but his tight bowling has helped his captain sneak him four overs he has often needed. The table below shows some of his best bowling performances in T20Is:

However, analysing his performance in the ODIs, some of his best figures include a match against South Africa at Harare where he took two for just 22 in four overs. It is then followed by a two for 29 from 6 overs against Pakistan recently during the first ODI at Sharjah. The table below shows his best bowling performances in the ODIs:

The surprising aspect of his career have been his Test numbers. He played two Tests — both against India on flat tracks — and has come up with match figures of four for 127 and three for 66, which yielded an average of 27.57. However, his bowling was apparently not good enough to cement his spot: it had perhaps to do with the fact that the primary reason for which he was picked — his batting — had fallen apart in that series.

However, he has done enough to be called an economic bowler who can break partnerships in ODIs, while he is a more than capable all-rounder in T20Is. With a few performances like the last over of the match the other day, he may just earn the tag of the ideal ODI all-rounder as well, thereby allowing Australia perfect balance in the side. 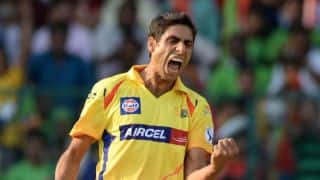