Glenn McGrath and Jason Gillespie bowl West Indies out for 51

Glenn McGrath and Jason Gillespie bowl West Indies out for 51

On March 8, 1999, West Indies were shot out for 51, their lowest total in Test cricket at the time, conceding victory to Australia by a mammoth margin of 312 runs. Glenn McGrath and Jason Gillespie were the primary and only destroyers, as spin wasn’t even considered on that eventful fourth day of the first Test at Trinidad. Karthik Parimal looks back at that forgettable game for the home team. 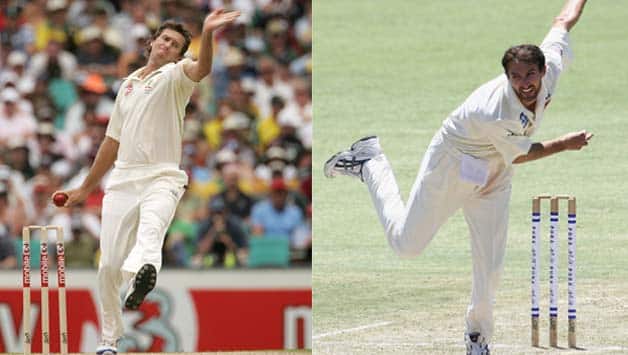 Glenn McGrath (left) and Jason Gillespie shared 14 wickets between them in the match, including nine in the second innings © Getty Images

On March 8, 1999, West Indies were shot out for 51, their lowest total in Test cricket at the time, conceding victory to Australia by a mammoth margin of 312 runs. Glenn McGrath and Jason Gillespie were the primary and only destroyers, as spin wasn’t even considered on that eventful fourth day of the first Test at Trinidad. Karthik Parimal looks back at that forgettable game for the home team.

For decades, the West Indies cricket team remained impenetrable, both home and away, conditions notwithstanding. Their might has often been depicted, and one wondered if their stronghold on Test cricket would ever be tampered with by any other nation. Gradually, due to lack of foresight and improper functioning in the backrooms, the intensity of fear they once injected in their opponents began to diminish. By mid-90s, they were no longer a force to reckon with, but sides could afford to take West Indies lightly at their own peril. Thereafter, captaincy changed hands on multiple occasions. This, and various other elements that caused instability, swiftly sent the team down the slippery slope.

By 1998, Brian Lara was assigned the task of reviving hope in the island, but a mediocre performance against a touring English side, before being whitewashed by South Africa, made matters worse for Lara and his troop. Then, in the March of 1999, Australia visited the West Indies. This series, many vouched, provided a good opportunity for the home team to reassert their authority on the big stage. The Australians, it was believed, were on the backfoot, since this was to be Steve Waugh’s first assignment as a full-time captain in the longer version of the game, and their team combination for the first Test at Trinidad wasn’t threatening either.

Two seamers — Glenn McGrath and Jason Gillespie — and two spinners — Shane Warne and Stuart MacGill — the press stated, would find it hard to work in tandem to contain a strong West Indian batting line-up. However, on the first day, thoughts regarding the Australian bowling department took a backseat, as the visitors chose to bat first. Against the likes of Curtly Ambrose, Courtney Walsh and the rest, they scored 269, which was respectable but by no means formidable.  In reply, despite an initial hiccup, West Indies looked composed till they knocked half of Australia’s total off, but soon, all talk about mismatch of spin and seam was made to look ridiculous, as McGrath and MacGill wiped out the last seven wickets for just 18 runs. West Indies could muster just 167.The sight of Lara — he scored 62 — attacking Warne was the only bright spot.

Australia’s second innings wasn’t convincing either. They kept losing wickets at regular intervals, Captain Waugh was dismissed for a duck, and if it hadn’t been for Michael Slater’s meticulous ton, they would have struggled to post a safe target. Australia scored 261, eight less than their first innings total, and set the home team 364 to win with almost two full days still intact.

The Pidge and Dizzy show

McGrath was having a whale of a timel (even with the bat) and the Test had been all about him since Day One. In the first innings, he and Gillespie were involved in a 66-run partnership that helped Australia reach 269, from a precarious 203 for nine. Little did they expect to come up with an even astounding association, this time with the ball, during West Indies’ second innings. They battered the batsmen immediately. Sherwin Campbell and Suruj Ragoonath, who failed to lay a foundation in the first innings, replicated their non-performance in the second innings as well. Lara, one of the few West Indian batsmen to put up a fight in that Test, succumbed, edging Gillespie to Mark Waugh. By lunch, the scoreboard read 16 for five, and as Wisden put it, “…for a time it was questionable whether they would better the all-time Test low of 26 by New Zealand against England in 1954-55.”

The ball wasn’t tossed to either Warne or MacGill even after the morning session, as McGrath and Gillespie continued to make inroads into the frail lower-middle order. Ridley Jacobs tried to tie one end up, but the leak at the other was causing a total system failure. Exactly eight overs and 32 runs later, West Indies collapsed, registering their lowest ever score of 51 in Test cricket. McGrath pocketed five wickets whereas Gillespie finished with four. The seamers shared nine wickets as Mervyn Dillon was the only batsman to be run out. Never before were the West Indies bowled out for a two-digit total at home, and their previous debacle was 53 against Pakistan at Faisalabad in 1986-87. The crowd sensed that their team had reached nadir, and Lara’s head was in serious demand.

“After rolling the Windies for 51 in the fourth innings of the first Test, in Trinidad — their lowest Test score — and seeing Brian Lara cop the wrath of a blood-hungry, baying media, I thought to myself, ‘This isn’t too bad a job, being captain of such a great team’,” writes Steve Waugh in his autobiography Out of My Comfort Zone. “When I did get back to the change room (after the presentation ceremony), the biggest celebration going on among our guys was occurring in McGrath’s corner, as he re-enacted his pull shot off Ambrose, defying logic and belief, on his way to a then career-best 39,” he recalls.

This was the first of West Indies’ five double-digit scores to follow in the next few years, but Lara, true to his tag of being a fighter, led his side handsomely during the next three Tests of that series. He finished as the leading run-scorer, amassing 546 runs from seven innings at an average of 91, three centuries and one fifty safely tucked under his belt. West Indies and Australia shared the Frank Worrell Trophy 2-2.

Butt, Asif to wait till April for CAS verdict