The ugly spat that marred an otherwise amazing encounter in history of cricket.

Glenn McGrath and Ramnaresh Sarwan were involved in an ugly on-field spat on May 12, 2003. Abhishek Mukherjee looks at the incident that marred an otherwise amazing encounter, famous for being a witness of what is still the record run-chase in Test cricket.

It could easily have been one of the greatest Tests ever, what with an epic chase that still stands: instead, after it was marred by the ugliest of verbal rows between a legend of the sport and one of the architects of the victory, it is remembered as the match where Glenn McGrath and Ramnaresh Sarwan had gone for each other.

It was not meant to unfold that way. McGrath had not played the first two Tests of the series at Bourda and Queen’s Park Oval, both of which Australia had won comfortably in the absence of Shane Warne (who was serving a ban) and McGrath himself. He had arrived only at the request of the plea of his wife Jane, who was suffering from secondary cancer. “I just wanted life to carry on as normal,” Jane had told her husband.

West Indies lost by 9 wickets at Kensington Oval; McGrath played in the Test and finished without a wicket, though he went for a mere 64 off his 36 overs thanks to his relentless accuracy. When the teams moved on to St John’s, a whitewash was definitely on the cards for Steve Waugh’s men.

Jermaine Lawson had already taken a hat-trick in the previous Test. This time he ran in hard, charging at the Kangaroos; for once the Australians were up against some hostility in the series. He ran through the tourists with career-best figures of 7 for 78 as they were bowled out for 240.

West Indies then had one of those collapses that had become familiar to them over the series: it was Brian Lara’s 68 (and an uncharacteristically high 65 from the last four batsmen) that took them to exactly 240, reducing the first innings to redundancy.

Australia did not falter a second time: Matthew Hayden (177) and Justin Langer (117) added 242 runs for the opening stand at 4.73, but once again there was a collapse. Of the rest, Waugh was the only one to go past 20 as Australia were bowled out for 417, leaving the hosts a world record target to chase.

The openers added 48, but with the seamers accounting for Chris Gayle, Devon Smith, and Darren Ganga in quick succession, West Indies were reduced to 74 for 3 on the third morning: the writing was on the wall. Lara rose to the occasion with a blazing 65, but it was eventually left to Sarwan and Shivnarine Chanderpaul.

The pair had got together at 165, but Sarwan’s strokeplay and Chanderpaul’s diligence took the score to 237 on a sun-baked pitch of St John’s. Frustration had been creeping in. The Australians knew this was the partnership to break, but were perhaps a tad impatient at not being able to break through. Then it happened.

Sarwan played the ball to square-leg and ran for a single. When he ran past McGrath the bowler, to the surprise of many, asked: “What does Brian Lara’s c*ck taste like?”

This was rather odd, coming from McGrath. When questioned about McGrath, the temperamental Rodney Hogg had once said: “I reckon he’d be a reasonable bloke, Glenn McGrath, because he couldn’t sledge. He has no idea, so he tells me that. Lenny Pascoe is a good sledger, I’m a good sledger and we aren’t good blokes. Based on that, he’d be a good bloke, I reckon, Glenn McGrath.”

But he did ask Sarwan the question; and Sarwan had responded: “I don’t know. Ask your wife.”

Daniel Lane later wrote in Line and Strength: The Complete Story: “Under normal circumstances, McGrath would have accepted that he’d asked for it. But with Jane at home sick, all he heard was an insult — and he saw red. While a little voice pleaded for him to ignore it, something just wouldn’t allow him to let the slur go unchallenged.”

McGrath’s fingers were pointed at Sarwan, and the words that came out of his mouth were not exactly the kind you’d associate with the legend: “If you f**king mention my wife again, I’ll f**king rip your f**king throat out.”

David Shepherd intervened at this point. Meanwhile, both Hayden and Langer had moved up to McGrath to in support of their teammate. Langer later said: “I didn’t hear the first part of the exchange. All I heard was for Glenn to ask his wife something, and that annoyed me, especially after what Glenn and Jane had been through. I blew up, I told him he was out of line — out of order — to bring Jane into it. There is a gentleman’s agreement about sledging — you don’t make it personal.”

McGrath, too, had realised that Sarwan’s response was out of impulse. Once the Test was over they had a long conversation over rum and Coke. “We all knew he wasn’t referring to Jane’s illness”, Gillespie later admitted. The match went on, as usual.

McGrath later confessed: “It (the memory of the incident) wouldn’t go away. The difference in our sizes looked terrible. I spoke to Sarwan and he was really good about it. He told me he wasn’t aware Jane was sick and he offered an apology, but I told him it was me who needed to say sorry.”

Waugh, on the other hand, justified McGrath’s outburst: “There was a culmination of things: him not bowling well, what was going on at home, and a batsman who was frustrating him. He exploded…I think we all have situations where life seems tough, but unfortunately when Glenn had his, a few million people were watching.”

Sarwan fell for a gorgeous 139-ball 105, adding 123 with Chanderpaul in 157 balls. Ridley Jacobs fell first ball, but Chanderpaul found an ally in young Omari Banks, the first Anguilla-born to play Test cricket. When they returned on Day Four West Indies required a mere 47 on Day Five.

Brett Lee struck early next morning, having Chanderpaul caught-behind for a 154-ball 104. Banks, however, polished off the remaining runs in the company of Vasbert Drakes, guiding his team to an emphatic world-record victory.

– Mike Procter, the match-referee, let both men go scot-free since Shepherd had intervened at the right time. He was severely criticised.

– James Sutherland, CEO of ABC, called Waugh, asking him to control the on-field behaviour of his team.

– It took McGrath several days to overcome the incident: “It still hurts to talk about it now. The days that followed were terrible. I kept to myself and I couldn’t stop thinking about what I’d done. No matter how hard I tried to tell myself it was okay, I fell really disappointed with myself because I’d let myself down.” 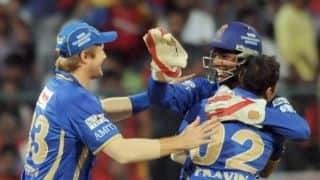 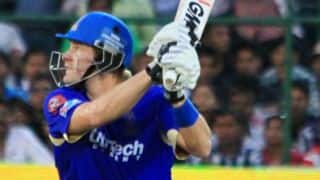