Gooch is the leading run-scorer in First-class and List A cricket combined.

Graham Gooch, born July 23, 1953, is one of the finest batsmen produced by England. He held many batting records in all formats of the game. On his birthday, Bharath Seervi lists some of the notable numbers of his career.

Graham Gooch made his international debut for England in July 1975, in the Ashes Test at Birmingham. He scored a pair on his debut and took almost took five years to score his maiden Test century. But then he scored another 19 in a career spanning over 20 years, during which he played 118 Tests and scored 8,900 runs. In ODIs, he scored over 4,000 runs in 125 matches including eight tons. He captained England to the finals of the 1992 ODI World Cup, where they lost to Pakistan.

Gooch played county cricket for Essex and in his First-Class career. where he scored 44,846 runs at an average of 49.01, including 128 centuries. He was one of the best batsmen Essex had for years. Gooch in his List A career managed 22,211 runs at 40.16 with 44 centuries.

– Gooch became the leading run-getter for England in Tests when he passed David Gower‘s 8,231 runs in 1993. He finished with 8,900 Test runs for England, which are still the most by any batsman for England.

– Gooch was the first player to score a triple century in Tests against India.

– Gooch is the only England player to aggregate over 2,000 runs on a single ground. He scored 2015 runs at Lord’s in 39 innings with 6 hundreds.

– Gooch and Michael Vaughan are the only England players to score 6 Test hundreds on a single ground. Both did it at Lord’s.

– Gooch was the second captain after Bob Simpson to score a triple century in Tests; 6 other captains managed to that after Gooch.

– Gooch’s 11 Test tons as captain for England are a record. He overcame Peter May’s record of 10 tons to achieve the feat.

– Gooch’s batting average of 58.72 as England’s Test captain is the highest among all those who captained England in at least 10 Test matches.

– Gooch has the most scores in excess of 50 by anyone for England in Tests (66).

– Gooch holds the record of scoring most Test runs and centuries after turning 35. He scored 4,563 runs and 12 centuries in 52 matches at an average of 48.54 after the age.

– Gooch scored 30,701 runs for Essex in First-Class cricket which is the most by anyone for the county team. He beat Keith Fletcher’s 29,434 runs for the record.

– Gooch was the first player to captain England in 50 ODIs.

– Gooch’s 4,290 runs in ODIs for England were a record until overcome by Alex Stewart.

– Gooch’s 8 ODI tons were a record for England until Marcus Trescothick beat it.

– Gooch represented England in ODIs from August 26, 1976 to January 10, 1995 which is duration of 18 years and 137 days — the highest by anyone for England. Only Ian Botham and Mike Gatting  have played ODIs for more than 15 years for England.

– Gooch’s 44 List A centuries are bettered only by Sachin Tendulkar (60).

– Gooch’s aggregate of 67,057 runs in First Class and List A combined are the most by any batsman in cricketing history. 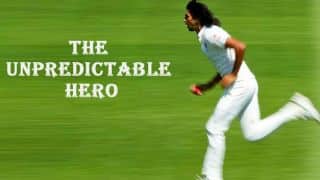