Grant Elliott: A surprise selection that stood up at the direst of situation

Grant Elliott: A surprise selection that stood up at the direst of situation

Grant Elliott couldn’t have chosen a better stage to demonstrate his role for the Black Caps.

Almost two and half months ago on January 8, when New Zealand announced their side for the ICC Cricket World Cup 2015, there were a few raised eyebrows. Jimmy Neesham, who had been in the scheme of things for the Kiwis during their build-up to the mega-event, was left out. What surprised most was his replacement, all-rounder Grant Elliott, who would have been 36 during the tournament and hadn’t played a game for New Zealand since November 2013. (READ: New Zealand vs South Africa, first semi-final match in Auckland in caricatures)

Till then, Elliott had played 51 ODIs, scored 1013 runs at 29.79 and claimed 20 wickets at 27.25 with his military medium pace. These numbers are far from great, and the stats backed those raised eyebrows and also the fact that an almost 36-year-old was replacing a talented 24-year-old.

The New Zealand cricket board decided to reward Elliott for his excellent form during the season, where he led the Wellington batting charts with an average of 48.25. More than that, he was batting with an unconventional approach, which bowlers at domestic level found tough to counter.

We could see the agony in the faces of the South African bowlers in the World Cup semi-final at Eden Park, Auckland, when Elliott justified his nickname ‘Magic,’ crafting a calm knock under immense pressure to score an unbeaten 84 from 73 deliveries, steering New Zealand to their first ever appearance in the tournament final.

In a side that boasts of game-changers like Brendon McCullum, Ross Taylor, Kane Williamson, Corey Anderson, Daniel Vettori, Tim Southee, and Trent Boult, Elliott was rarely discussed. Be it press, fans or the pudits behind the mics, the impression was that the Wellington all-rounder was just filling up one of the bits-and-pieces slots.

It’s not that he didn’t prove his worth when he was recalled earlier this year; in fact since his comeback, he has amassed 513 runs from 14 innings, at an average of 51.3 and strike rate of 100. With the ball, he picked up nine wickets at an average of 25.1. These are good numbers, but more often they came as support to the individual brilliance of other stars. In fact, when Luke Ronchi got that massive 170 from 99 balls, it was Elliott who had begun the carnage and later restrained himself to let the wicketkeeper take over. Elliott’s unbeaten 104 in that record 267-run stand isn’t spoken about too much.  (New Zealand vs South Africa: Pick of the tweets)

World Cup is a big stage and what you do here helps you get noticed. Prior to this match, he had just scored 143 runs in the tournament at an average of 23.8. Included in that were some selfless innings down the order for the team who were exceptional throughout the tournament and now have won eight in a row to make it to the grand finale. Elliott couldn’t have chosen a better stage to demonstrate his role for the Black Caps. It’s games like these which make mortals legends, and his composure has now taken him to the history books. He will be remembered as the one who helped the Kiwis break their World Cup semi-final jinx; a stage New Zealand failed to go past in six times in the previous 10 attempts.

It was a fairly ironic moment for a South African fan when Elliott smacked that winning six off Dale Steyn through mid-wicket. A South African-born cricketer, who has earlier represented teams like Gauteng and Transvaal, delivered the knockout blow to South Africa.

New Zealand play the final in Melbourne Cricket Ground (MCG), and it will be their first match of the tournament outside their country. The good news is the team is playing some exceptional cricket and Elliott averages 52.5 from the five ODIs he has played in that country.

At 36, we will see curtains falling on Vettori’s international career but at the same age it is a new beginning for Elliott. In hindsight, kudos to the New Zealand selection committee and the expectation now would be nothing less than the World Cup. 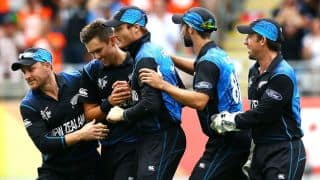 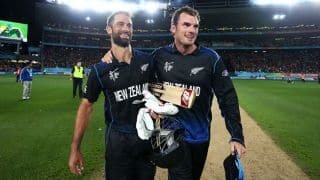