Born on October 29, 1971, Greg Scott Blewett was a consistent and reliable top-order Australian batsman in the second-half of 1990s. He also bowled decent medium pace and earned the reputation of a partnership-breaker in Tests. Prakash Govindasreenivasan has more. 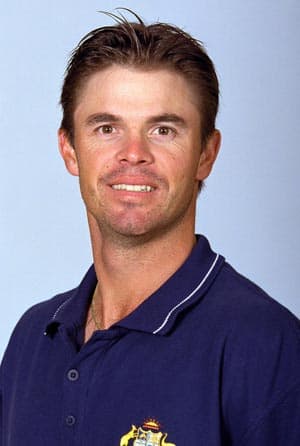 Born on October 29, 1971, Greg Scott Blewett was a consistent and reliable top-order Australian batsman in the second-half of 1990s. He also bowled decent medium pace and earned the reputation of a partnership-breaker in Tests. Prakash Govindasreenivasan has more.

Greg Blewett chose to follow his father, Bob Blewett’s — former South Australia skipper — footsteps and picked up the bat and ball at a young age. He managed to go one step further and play for Australia.

Blewett was a bright prospect from a fairly young age. He was an Australian Institute Sport (AIS) Australian Cricket Academy scholarship holder in 1990 and was picked to play for South Australia in 1992. His performances with the bat during his first couple of seasons with South Australia had grabbed a few eyeballs. In 1994-95, Blewett got a chance to play for Australia A against Australia. He took the opportunity to present his case further and was suitably rewarded a spot in the senior side just a few months later.

Blewett made the most of the opportunity handed to him at the highest level early on. The 23-year-old played glorious cover drives and pull shots to bring up a century against England at Adelaide Oval during the Ashes 1995 and became the 16th Australian to do so on Test debut. He followed it up with another century, to join the likes of Bill Ponsford and Doug Walters for scoring back-to-back centuries in consecutive Tests. His second came in the second essay in Perth and was far more crucial as Australia went on to get a positive result from this game. Having earned a good first-innings lead, Australia needed to accelerate and get a good total on the board that they could defend. Blewett’s 115 off 158 balls helped the hosts in that endeavour as they set a massive target of 453. Blewett was in fact, unlucky to be adjudged out caught when the ball flew to the close-in fielder due to a deflection from his thigh pad.

Blewett got four fifties in the following year and was still in the reckoning. He began 1997 with a score of 99 against the West Indies in Adelaide. It was a great start leading up to what can be termed as Blewett’s finest Test knock.  Playing against South Africa at Johannesburg, Blewett and Steve Waugh put on a record-breaking stand of 385 runs for the fifth wicket to guide their side to their second biggest win over South Africa at that point in time.  On the second day of the match, Blewett and Waugh became only the tenth pair in Test cricket history to play throughout a day. While Waugh played a typical gritty innings marred by struggles against cramps, Blewett drove and pulled his way to his first ever double ton. His knock of 214 came in 421 deliveries and was laced with 34 boundaries. When the partnership was finally broken by Jacques Kallis by getting Waugh out, the latter and Blewett had added the second highest partnership of 385 runs for the fifth wicket and the highest ever against South Africa, eclipsing England duo Bill Edrich and Denis Compton’s partnership of 370 at Lord’s in 1947.

Blewett’s performances in 1997 would have pleased him, given that he added a double ton and two scores of 99 to his Curriculum Vittae. 1998, however, something else in store for him.  Till this point in his career, Blewett was yet to play on wickets that would assist the spinners. He travelled to India and found his pet peeve — spin bowling!

He had a torrid time in the sub-continent nation and returned with just 48 runs to his name in three Tests with a tail-ender-like average of 8.0.

“You just don’t feel like you’re ever going to get into some sort of rhythm. For me, it was all about survival for the first 20 or 30 minutes, but I just found it a really hard place to start off your innings,” Blewett once said in an interview with Fox Sports.

Talking about memories from India, he said that it was the growing decibel level every time Sachin Tendulkar walked out to bat and went on to concede that his favourite memory from the series was getting on the plane home.
Despite being a calm and composed batsman at the top, Blewett had major troubles against spin bowling. The likes of Anil Kumble and Mushtaq Ahmed troubled him regularly as he always failed to read the turn. Often one would find him dismissed in an awkward fashion due to his inability to read the ball from the bowler’s hand. More often than not, a spinner would be brought on the moment Blewett walked out to bat and there would be more close-in fielders to exert more pressure. A lot of his leg-before the wicket decisions have come against spin bowling.
Blewett in One-Day Internationals (ODI)

Blewett did not achieve much success in the limited-overs format of the game. With just two half-centuries to his name, Blewett’s ODI career was riddled with inconsistencies and failure to seize an opportunity and make a big score. Constant scores in the 20s, 30s and the 40s meant he couldn’t capitalise on the good starts and eventually faded away after a four-year stay in the ODI side.

Both his half-centuries came in low-scoring wins for Australia. The first one came against the West Indies at the Melbourne Cricket Ground in 1996. After bowling out the visitors for 172, Australia started strongly but lost four wickets. They were never in for an upset and Blewett’s knock of 57 from 90 balls ensured that the game was put beyond the visitors’ reach. Australia went on to win the game by five wickets.

His next fifty came against South Africa in Durban in 1997. This time, it was his 53 from 73 balls that kept Australia from a complete collapse after Shaun Pollock, Rudi Bryson and Allan Donald had picked up an early wicket each. He added 33 runs for the fifth wicket with Adam Gilchrist (77) and helped in putting up a total of 211. Andy Bichel and Shane Warne did the rest with the ball as the hosts fell short of the Australian total by 15 runs. Blewett picked up 14 wickets in both formats that he played and earned a short-term reputation of a partnership-breaker.  Most of his wickets in ODIs were that of top-order batsmen and he also dismissed Brian Lara on two occasions. Be it against the West Indies in Barbados in 1995 where he broke a 68-run stand between Brian Lara and Carl Hooper or against South Africa in Johannesburg where he brought a much-needed breakthrough after Jacques Kallis and Daryl Cullinan had added 101 runs for the fourth wicket. In Tests too, he had the knack of dismissing top-order batsmen and breaking good partnerships. In the Test against New Zealand in Wellington in 2000,  Blewett forced Adam Parore to nick one delivery to wicketkeeper Adam Gilchrist after adding 109 runs for the seventh wicket.

Blewett had the promise to be a regular feature in the Australian setup for a long period of time but failed to hold on to his spot due to a few technical gaffes in his batting.

His skipper Steve Waugh had once rightly said that Blewett’s unimpressive average in both forms of cricket implied his inability to align talent with results.

West Indies tour of India 2013: We are here to improve our past record, says Darren Sammy