That was perhaps the moment that sponsorship came into the frame of English cricket in a big way.

August 22, 1968. As the epochal Test match between England and Australia was about to begin, Gubby Allen was horrified by something that he saw in the ground. Arunabha Sengupta relates the story of the old man’s shock and the start of cricket sponsorship in England.

Drama in many acts

The Oval Test of 1968 is etched in the annals of cricket history as a drama of many fascinating acts.

Basil D’Oliveira, squeezing his way back into the team in spite of a maze of intricate political cloak and dagger routine, changed the course of sporting history forever by scoring a magnificent 158. In fact when he got to 50, umpire Charlie Elliott remarked, “Well played — my God, you’re going to cause some problems.” And when he dabbed a ball from John Gleeson down the leg side to get to his hundred, Elliott added, “Oh Christ, you’ve put the cat among the pigeons now.” Gleeson was a bit more reserved as he offered his hand, “Well done, Bas, it’ll be interesting to see what happens.”

And after four days of intense sun and heat, on the fifth morning the storm blew in from nowhere. Within half an hour, most of the grass had disappeared under an inch of water. In another thirty minutes, the sun was shining brightly, the rays sparkling off the ripples.

England captain Colin Cowdrey made his way to the middle, trousers pulled high over his boots. He started by urging the Oval ground-staff to do something about it. And he quickly realised that just those few hands would not be sufficient. He turned to the spectators for help, appealing on the loudspeaker. And the crowd swarmed in, with personal blankets, handkerchiefs and parts of their clothing.

At 2.15 pm, they started their mopping operations under the astute guidance of groundsman Ted Warn. Gradually water drained away. Patches of green became larger and larger and linked up. And by 4.45 pm the miracle had been achieved. The large hand of the Vauxhall Lane stand clock showed twenty to five when John Snow ran in. Just 75 minutes of play remained.

Finally, with six minutes left in the match, Derek Underwood trapped John Inverarity leg before to win the match for England and square the Ashes.

All that has been dealt with in detail elsewhere in these pages.

However, this epochal match had another stirring moment even before a ball had been bowled. And that changed the face of the game as one knew it as much as did D’Oliveira’s fascinating innings.

The old man is shocked

Climbing into the Surrey Members’ Pavilion early on the first day, the old MCC establishment pillar Gubby Allen was absolutely appalled. His 66-year-old eyes were still keen and they had zeroed in on something that they had never witnessed before.

Straight ahead, at the Vauxhall end, there was a board that rested around the boundary, announcing XS Insurance. The first advertising board ever seen in a Test match in England.

Turning to the members around him, Allen pointed his finger and asked with audible horror, “What on earth is that?”

Seated beside him was Bernie Coleman. A South London publican, he had recently joined the Surrey Committee. And according to Stephen Chalke’s excellent new book Summer’s Crown Coleman’s reply was simple and to the point. “That, Mr Allen, is £500, and we’re broke.”

That was perhaps the moment that sponsorship came into the frame of English cricket in a big way.

In his book, Chalke provides fascinating details of the sponsorship that followed.

Till then, only Gillette had been around in the cricket landscape, sponsoring the 60-over championship since its inception in 1963. They did so till 1980, when to their dismay they discovered that English people associated Gillette more with cricket than with razor blades. The sponsorship of the tournament was handed over to NatWest.

But, starting with that landmark moment of Gubby Allen’s horror at The Oval, cricket sponsorship became the new big thing.

John Player, banned from advertising their cigarettes on Television since 1965, sponsored the 40-over Sunday League that came into being from 1969. It was an alternative way to get to people, complete with their own mobile wagon and three nubile young ladies displaying their products at every match. Free cigarettes were offered to the spectators by these girls, making many a fantasy come tantalising near reality. John Player’s investment amounted to £65,000 each year. £3,000 went to each of the counties.

That same summer Prudential Assurance began sponsoring the One-Day series between England and the visiting sides, spending a sum of £30,000.

The relatively minor forms of cricket also got financial backers. Esso started sponsoring the knock-out cup for schools and Champagne Mercier the old boys’ sides. Ladbrokes provided a Man of the Match award for the Championship games. Watney Mann started offering a Groundsman of the Year award.

The only company to make a blunder in this race for sponsorship was Schweppes. Hampered by the chairmanship of Adrian Cadbury, a cricket-agnostic Cambridge rowing blue, and an arts major director Basil Collins, they did not know how to react to the offer of Test series sponsorship. TCCB’s Peter Lush offered them a deal of £120,000 a year for the County Championship, £200,000 for the Tests or both for a discounted price. With the chairman and director not really cricket men, the decision was taken by an external consultant named Vernon East. And he plumped for the County Championship. Later he admitted that it was a bloomer.

The Test sponsorship deal was grabbed by an insurance company by the name of Cornhill. As a result, public awareness of Cornhill Insurance climbed from 2% to 17%. 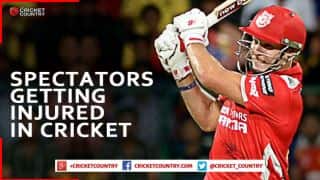 Spectators on the receiving end of a batsman's fury 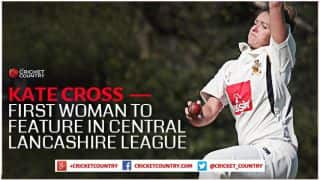