Dhoni and co. showed how dominant Rising Pune Supergiants were in the opening tie, will look to go about the same in Match No.6 of IPL 9 against Gujarat Lions.

Match No.6 will see the Gujarat Lions (GL) take on Rising Pune Supergiants (RPS) in the ninth edition of Indian Premier League (IPL) 2016. GL and RSP are both coming off an easy and less challenging wins in their previous matches, will go into this match without any sense of nerves having played their opening IPL tie. RPS were clinical with the bat and ball, with MS Dhoni showing absolutely no signs of worry whatsoever. Dhoni is known for his no non-sense approach, will in all likelihood adopt for an unchanged side. Vishal Mehra lists down the probable playing XI for RPS against GL. FULL CRICKET SCORECARD: Gujarat Lions vs Rising Pune Supergiants, IPL 2016, Match 6 at Rajkot

Top-Order: Given the perfect platform Ajinkya Rahane and Faf du Plessis provided RPS against Mumbai Indians, it is most unlikely that the management would tinkle with them. Rahane showed how good a batsmen he is when it comes to IPL cricket. Du Plessis who had a poor season for South Africa, finally showed his batting prowess in an almost run-a-ball 34. Kevin Pietersen came in after scoring heaps of runs in Big Bash League (BBL) and Pakistan Super League (PSL) stamped his authority over the match, taking apart Harbhajan Singh — hitting him for two sixes — in his little cameo of 21 from 14.

Middle-Order: RPS middle order boasts of the likes of Steven Smith, MS Dhoni ,Rajat Bhatia, Mitchell Marsh. Smith has been off-colour in the T20 format will look to get his record straight, being named as one of Wisden’s cricketer of the year will only add to his determination to score big. Mitchell who bowled an excellent spell against MI, will look to make his batting do the talking when and if he gets an opportunity. Dhoni arguably the best finisher in the game, will ideally want his top-order to do the bulk of the scoring but wouldn’t mind having a bat himself. Accompanying them will be Bhatia, who is one of the most lethal bowlers when it comes to pace-variation and deception. His batting skills adds to the batting might of RPS.

Bowling Order: Bowling duties will be taken care by the Indian pace duo of Ishant Sharma, RP Singh and spin duo of Murugan Ashwin and Ravichandran Ashwin. RP Singh has continued his good performance from the Syed Mustaq Ali Trophy. Ishant Sharma on the other hand will focus on picking up wickets in the first spell, which he is expected to do. Murugan easily overlapped Ravichandran in bowling the last time they were fielded together. Murugan bowled at a miserly economy of 4 while, Ravichandran was required to bowl just one over.  With Mitchell and Bhatia in the mix, the RPS bowling attack looks more than just potent but rather deadly. 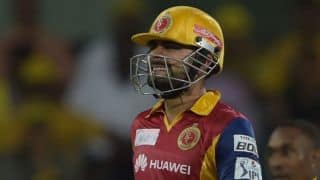