Besides being a champion batsman and an effective seamer, Gul was a superb fielder, especially at cover-point.

Born, October 15, 1921, Gul Mohammad was a former left-handed batsman and part time left-arm medium fast bowler. With the below average height of 5’5”, Gul was a brilliant attacking batsman and an astounding fielder at that time. On his birth anniversary, Abhishek Kumar picks out 10 interesting facts about the man who represented both the biggest rivals of cricketing world.

1. Played for both India and Pakistan

After making his debut in First-Class cricket in Ranji Trophy 1938-39 seasons at an age of 17, Gul was a promising cricketer at that time, and was marked as an India probable. But unfortunately, Second World War kept him away from playing international cricket. Post-War, Gul made his debut for India in 1946 against England at Lord’s and later; nine years after Independence; he went on to represent Pakistan. He became the third (and last, till date) cricketer to play for both India and Pakistan.

Gul was a talented athlete, swimmer and kabaddi player, but thankfully for our favourite sport, took to cricket as a career.

Besides being a champion batsman and an effective seamer, Gul was a superb fielder, especially at cover-point. Many observers of the game declared him as a marvellous fielder.

Gul went to Islamia college of Lahore in undivided India. In those days, Islamia College had a well known famous team from where future Test stars like Nazar Mohammad, Fazal Mahmood and Imtiaz Ahmed came out.

Just before five months of Independence, Gul played his lifetime knock in Ranji Trophy final of 1946-47 against Holkar. Since the final was a timeless affair, the batsman had ample time. After bowling out Holkar for 202, Gul and Vijay Hazare came into bat at the crucial situation of the match when Baroda were 91 for 3. They went on and on, making every Holkar bowler look helpless. They added 577 runs and broke the previous-best record of 574 runs by Frank Worrell and Clyde Walcott. Gul ended up scoring his highest First-Class score (319) while Hazare made 288. This record was finally broken when Kumar Sangakkara and Mahela Jayawardene with their partnership of 624 runs in 2006 against South Africa.

6. Debut and farewell in the same match

Till 1955, Gul played both domestic matches in India but after settling down in Pakistan and earning the right to represent, he became the third cricketer after Abdul Hafez Kardar and Amir Elahi to play Tests for both nations. Though he played only one Test for Pakistan (against Australia in 1956), he scored the winning run.

Post retirement from cricket, Gul joined the Board as Director Gaddafi Stadium and worked till he joined Punjab Sports Board as a cricket coach in 1987.

Gul also once did umpiring in a First-Class match between the Railways and Services Industries on February 1976 at Gaddafi Stadium of Lahore in the semi final of Services Cup 1975-76.

Gul’s son Firdaus Gul also played cricket but never attained the stature of his father. Firdaus played only two matches for Lahore B during 1969-73.

Gul died of liver cancer, which he got to know just six months before his death on May 8, 1992. We pray to God to grant his soul a place in the heavens. 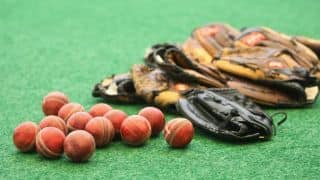 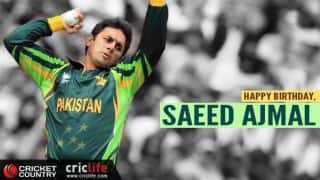 Saeed Ajmal: 18 interesting facts about the Pakistani tweaker whose career was curtailed by the 15 degree line