On May 15, 1999, Hansie Cronje ran into the first of his many major troubles, when he plugged-in an earpiece, to receive instructions from coach Bob Woolmer, during South Africa’s first World Cup fixture against India. Karthik Parimal looks back at that incident and what followed thereafter. On May 15, 1999, Hansie Cronje ran into the first of his many major troubles, when he plugged-in an earpiece, to receive instructions from coach Bob Woolmer, during South Africa’s first World Cup fixture against India. Karthik Parimal looks back at that incident and what followed thereafter.

When two similar personalities, with a hyperactive mindset work in unison, the results are often intriguing. Hansie Cronje and Bob Woolmer certainly fell in the aforesaid bracket. In hindsight, it’s baffling how the careers of both these individuals panned out — including their unfortunate and untimely deaths. When the duo collaborated, as captain and coach respectively, to steer the South African cricket team, they did a commendable job. But for every crest there is a trough, and the two protagonists faced a reasonable amount of both during their time at the helm.

In Woolmer, South Africa had a coach who was seldom hesitant in innovating, introducing technology to enhance the outcome of the unit by riding on its endless benefits. As a skipper, Cronje gave a free rein to the former and was enthusiastic in implementing a concept, however novel, put forth by him. In tandem, they operated harmonious and productively.

As the 1999 World Cup dawned, perhaps inspired by American football, or France’s victorious 1998 FIFA World Cup campaign, Woolmer struck upon the idea of asking a few of his players to take field with an earpiece, so they could keep receiving invaluable inputs from him, the coach, who holds the advantage of gaining a different perspective of the match from the sidelines. When he conveyed the thoughts scurrying in his ever-busy head to Cronje, the latter readily agreed. Allan Donald, too, was roped into this experiment; he was now one of the laboratory technicians.

On May 15, 1999, as South Africa prepared to face India for their first fixture of the celebrated tournament, Woolmer, Cronje and Donald readied themselves to roll out the plan. India captain Mohammad Azharuddin won the toss and elected to bat. Without any trace of worry or fear of being spotted by the umpires, or the sport’s governing body, the two South African players walked out to field with an earpiece safely tucked in. The unusual object soon became apparent, thanks to the television cameras, but no action was instantly taken, perhaps because not many could comprehend the functionality of the device or, for that matter, even seen as a device.

The two Indian batsmen at the crease were Sourav Ganguly and Sachin Tendulkar. While Tendulkar was nonchalantly going about his task, Ganguly became suspicious. Just a little before the first drinks break, he noticed Cronje talking to himself. Ganguly — playing his 100th One-Day International (ODI) but first World Cup match —duly walked to the two on-field umpires, David Shepherd and Steve Bucknor, and expressed his concern. This prompted the powers that be on the field to summon Cronje.

It was soon determined that the South African skipper had been wearing an earpiece to receive instructions from the coach, and since the laws of cricket had stated nothing against such a move, or controlled captaincy, the umpires could not decide on a particular course of action. Hence, the matter was rightly referred to match referee Talat Ali. Upon hurriedly contacting the International Cricket Council (ICC), he was informed that although it seemed within the letters of the manual, it should be classified as an unfair tactic. A bemused Cronje and Donald were immediately ordered to remove the on-field communication system. The issue was laid to rest, but only until the end of the game, which the South Africans eventually won by four wickets. 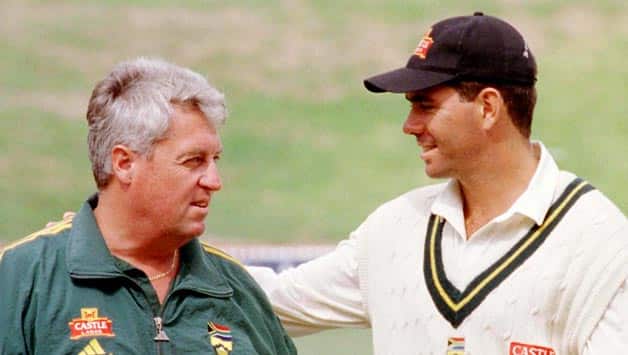 By 1999 (one year before the match-fixing saga was unearthed), Cronje was considered to be one of the finest leaders on world stage and hence it surprised many that he now needed support from sources off the field. “It’s simply quite out of place and does not fit in with his widely accepted cricketing personality. Furthermore, indirectly it is a manifestation of a lack confidence in himself, the inability to act independently and an insult to his own cricketing experience acquired through the years. Not to mention the lowering of his stature and esteem amongst the players he leads,” stated the Daily News.

Woolmer was apologetic, although he clearly believed there was nothing wrong with his new approach. “All I was trying to do was give help and advice. I’m sorry if I’ve upset anyone. I’ve tried to be innovative; the idea was to take the game forward. Where we erred was I should have asked the ICC for permission.

Perhaps I’m naïve, but it didn’t occur to me. I felt it was a really good idea and I would like to discuss it with the ICC,” he said.

On the other hand, the ICC felt it was anything but innovative. “The World Cup is not the event to experiment with new devices without first seeking permission from the ICC,” they bluntly said.

Cronje, though, backed the process, stating he saw no difference in this form of communication and one in which messages are usually carried out over a change of gloves or a bottle of drink. Azharuddin, too, believed it was a move that would become rampant in the years to come.

Seven years later (Cronje’s match-fixing chapters had been well-documented by then), a few reports suggested that detectives were looking for evidence of foul play involving the South African team at the 1999 World Cup, but the investigation yielded little.

The last word, though, must belong to Amul. An advertisement, depicting Cronje’s earpiece with the title “Cronje Unplugged” was run. It couldn’t have been more apt.