After a dramatic win in T20 World Cup 2016, the West Indies gain top spot when one imagines of the T20 cricket. One person who has stood out for his tremendous contribution in shorter formats for the Windies (apart from his funky hairdos) is Andre Russell. There has got to be a reason this man is called for in every T20 league, be it Caribbean Premier League (CPL), Big Bash League (BBL), Pakistan Super League (PSL) or Indian Premier League (IPL). Despite all the controversies, Russell remains the go-to man in this format. With the trend of T20 cricket catching up, let’s have look at some of the top innings of the power-hitter Jamaican, including one of my personal favorite as he turns 28:

1) Kolkata Knight Riders vs Chennai Super Kings, Champions League 2014: This was during the Champions League T20 2014 when champions KKR took on CSK. Winning the toss, KKR restricted CSK to 157 for 4 in 20 overs. Narine proved to be economical with 1 for 9 at the end of 4 overs. KKR had a dodgy start to the chase, as CSK reduced KKR comfortably to 51 for 5 in 9 overs. It was time for powerful Caribbean to enter the field at his usual middle-order position of No.7 and turn the tables around. He hammered 58 from 25 deliveries, including 4 fours and 5 sixes. With that finishing touch, he managed to snatch victory from the jaws of defeat. ALSO READ: T20 World Cup 2016: West Indies have upper-hand over India when it comes to all-rounders

2) Kings XI Punjab vs Kolkata Knight Riders, IPL 2015, Match 14: This has been yet again one of his best knocks under pressure situations. George Bailey’s knock of 45-ball 60 helped KXIP set up a target of 155. When KKR began their inning, once again a similar situation was found as witnessed in 2014. This time around KKR were restricted to 60 for 5. Russell once again took the centre stage, showing what he is capable of. He stitched up a 95-run stand with Yousuf Pathan, with him contributing more and let Pathan play the second fiddle. His feat of 36-ball 66 included 9 fours and 2 sixes and led his team to a thrilling 4-wicket win. Moreover, he was named ‘Man of the Series’ in that edition.

3) Sydney Thunder vs Sydney Sixers, BBL 2015-16, Match 1: Being the opening match of one of the biggest cricket events in Australia, Sydney Thunders started off on winning note with the help of Russell. The skipper Michael Hussey led from the front and remained unbeaten at 59-ball 80 alongside Russell. Posing a total of 158, it was an uphill task for the Thunders to defend against a batting-heavy Sixers. Considering the all-rounder Russell is, his 13 for 3 (including a maiden over) proved his calibre once again in T20 field. The game ultimately belonged to the Thunders winning by 36 runs. It was the same year Russell ended the league with 16 wickets in his kitty after playing 10 matches. ALSO READ: Parthiv Patel, Andre Russell, Kieron Pollard reach milestones in IPL 2016

4) Islamabad United vs Quetta Gladiators, PSL 2016 (Final): It was once again Russell being a saviour at the time of a must-win game. Quetta Gladiators, captained by Sarfaraz Ahmed, gave a tough competition posting huge total of 174 for 7. The half-centuries by Ahmed Shehzad and Kumar Sangakkara were the seeds that grew to a total of 174. It wasn’t just Gladiators marching ahead, with 7 wickets down; three crucial ones belonged to Russell, conceding 31 runs from 4 overs. Scalping crucial wickets of Kevin Pietersen, Sangakkara and Anwar Ali indeed brought Gladiators to the doorstep of defeat. The throne finally belonged to Islamabad United, who at one moment looked would be out of the tournament.

5) India vs West Indies, ICC World T20 2016 (2nd Semi-Final):  After making a struggling entry in World Cup semi-final, India were on the verge of booking the finals’ berth. West Indies came with three wins under their belt and looked confident to outplay India. The hosts boasted of a strong top-order batsmen in Rohit Sharma, Ajinkya Rahane and Virat Kohli and put up a competitive total of 192. India knew the chances were still 50-50 knowing the hard-hitters West Indies featured. Though India were fortunate enough to dismiss Marlon Samuels and Chris Gayle, the way Johnson Charles and Lendl Simmons took the charge and put the team in the driver’s seat. Soon after Charles was picked, India were back in game until Russell set the stage on fire. ALSO READ: Kolkata Knight Riders vs Sunrisers Hyderabad, IPL 2016: Andre Russell and Piyush Chawla combine to take a sublime catch

Simmons was surely the star of game, but with those quick fire 20-ball 43 from Russell, somewhere he played a crucial part in the game to take West Indies over the line.

Russell might have been caught in anti-doping Test that had put his image down, but he has always let his all-rounder skills do the talking. On his birthday, wishing the Jamaican more such splendid innings. 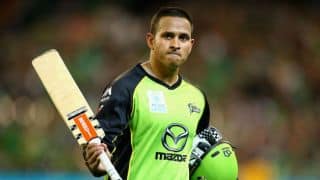