In a career that has seen exhilarating highs and stunning lows, Harbhajan Singh has overcome the vicissitudes of life to earn the rare honour of playing his 100th Test — only the second off-spinner in the history of the game to reach the milestone after the incomparable Muttiah Muralitharan. Harbhajan Singh (above) is only the second off-spinner in the history of the game, after Muttiah Muralitharan to play 100 Test matches © Getty Images

In a career that has seen exhilarating highs and stunning lows, Harbhajan Singh has overcome the vicissitudes of life to earn the rare honour of playing his 100th Test — only the second off-spinner in the history of the game to reach the milestone after the incomparable Muttiah Muralitharan.

Harbhajan has been under a siege with his plummeting fortunes and one wondered if he would get to play his 100th Test, especially considering Ravichandran Ashwin’s success and forging a promising partnership with Pragyan Ojha.

“You have to be a very good player to be picked a 100 times for your country and at most times Harbhajan has been a very good player,” tweeted Harsha Bhogle. And Harbhajan has been an extraordinarily successful, especially at the start of his career. There is no question that his track-record against the Australians which has helped him greatly to be first selected in the Indian squad and then in the playing XI at Chennai in the first Test against Michael Clarke’s men.

Harbhajan thus became the tenth Indian to play 100 Test matches; Sachin Tendulkar and Virender Sehwag, both playing the Chennai Test, are part of that elite club.

It is a tremendous achievement for a spinner to last the test of time and feature in 100 games. Harbhajan joins Anil Kumble in that category — the man who passed the baton to him as India’s spin spearhead. In all, 54 men have played 100 Test matches and only four of them are specialist spinners. Shane Warne (145), Muttiah Muralitharan (133), Kumble (132) and Daniel Vettori (112) are the specialist tweakers in the list.

The ups and downs

If one breaks Harbhajan’s Test career into four halves, one would find that the latter part hasn’t been as rewarding as the early phase. The 2001 series against Australia was the turning point of his fledging career and there were times when he was preferred to the veteran Kumble. However, Kumble then made a remarkable recovery and Harbhajan could only assert his role once the leg-spinner called it a day. Perhaps, some of those breaks may have hampered his rhythm, but his form dropped drastically since 2010 — a point where he was indisputably India’s first choice spinner.

Harbhajan’s diminishing returns are quite evident in the above table. In his first quarter, he averaged 27.95 and bettered it in the next with 27.80. However, in his last 49 Test matches he has averaged in the late 30s — not the kind of figures one expects from a strike-bowler.

Harbhajan’s third quarter was fine wickets-wise, but his average indicates that he cost more per wicket. However, the drastic drop was evident in the last 24 matches as his average went up to 38.50. He had only two fifers to show in this period. One can say that in the fourth phase, he hasn’t been the same bowler who stunned the Aussies in 2001 or usurped Kumble’s spot in the team.

India look set to test Australia with spin and Harbhajan returns to face the old enemy. That he is playing his 100th game against a side he has troubled the most makes the occasion even more special. The whole setting will definitely motivate him to make a statement and resurrect his international career.

The series against Australia could be do-or-die for Harbhajan’s Test career. 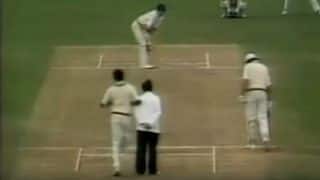