There is burden on Harbhajan as a captain and a player ahead of CLT20.

Mumbai Indians find themselves in a muddle even before the start of their 2011 Champions League T20 (CLT20) campaign. Injuries have rocked their build-up and have crippled their resources as eight of their 23 contracted players for the 2011 season have been ruled out of the tournament. With their line-up in tatters, the CLT20 have allowed them to field five foreign players in a game, a deviation from the limit of four. However, the concession by the authorities may not be enough as some of their impact players are out injured which would affect the balance of their team.

Mumbai’s biggest stars Sachin Tendulkar, Rohit Sharma and Munaf Patel picked up injuries on India tour of England and haven’t been able to recover in time to represent their franchise. The batting revolves around Tendulkar and Sharma as they carry the burden of guiding the Mumbai innings. Their absence is a huge blow as the role they play isn’t the easiest in T20 cricket. On the other hand, Munaf bowls in the right channel and keeps the scoring rate down. His absence would put greater responsibility on Lasith Malinga; he would have to make every ball of his four overs count.

Some of the promising domestic players in Mumbai original squad for the CLT20 such as Suryakumar Yadav, Dhawal Kulkarni and Ali Murtaza found themselves on the wrong side of the fitness mark and had to be withdrawn from the tournament. Yadav is an unknown quantity but Kulkarni and Murtaza have delivered for Mumbai whenever called upon. Kulkarni was impressive with his pace and the subtle movements off the seam, and Murtaza burst on to the scene as useful left-arm spinner. Their absence may not be as big a blow when compared to that of Tendulkar and company, but it is a significant dent on Mumbai’s plans for the CLT20.

The tough task of leading a depleted Mumbai Indians side is in the hands of Harbhajan Singh. The off-spinner is making a comeback after injury and would be hungry to prove his critics wrong. T20 may not be the ideal way for him to make a return to top gear, but he needs to grab every opportunity with both hands. With the added burden of captaincy, it would be interesting to see how he responds to the job as well as his role in the side as a player.

Even though Mumbai’s impact players are missing, they have good enough fire power in their ranks. Their domestic pool comprises Tirumalasetti Suman, Ambati Rayudu, Abu Nechim, Rajgopal Sathish, Sarul Kanwar and Yuzvendra Chahal. With the exception of Chahal and Kanwar, the others have donned the Mumbai Indians jersey.

Suman didn’t get many games in the 2011 season but his stint with Deccan Chargers in previous editions of the Indian Premier League (IPL) indicate that he can be destructive and add value to the side. Rayudu has been a vital cog in Mumbai’s line-up as he has played some fantastic knocks. Sathish has earned a reputation as a fielder during the IPL but needs to do more with the bat to justify his place in the Mumbai setup. Nechim has impressed with his pace and can be a wicket-taking bowler. Since Mumbai need to field six Indian players, the four discussed above need to play a crucial role and are almost certain of playing with Harbhajan.

The toss-up for the sixth Indian spot would be between Chahal and Kanwar. Chahal is an off-spinner, whereas Kanwar is a frontline batsman. Thus it would depend on the balance Mumbai wish to strike which would determine the Mumbai debuts of the two youngsters.

The foreign players at Harbhajan’s disposal are James Franklin, Aiden Blizzard, Malinga, Kieron Pollard, Dilhara Fernando, Davy Jacobs and Andrew Symonds. Franklin, Malinga and Pollard walk into the side considering the impact they have had on Mumbai’s performance in the past. In the absence of Tendulkar and Rohit, Franklin would have to play the role of the sheet anchor, something he did very well in the latter stages of IPL 2011. Pollard would be asked to play his destructive role with the bat. He is also useful with the ball and electric fielder. But he needs to rise above his inconsistency and play more significant knocks to make a significant impact.

Malinga, the “yorkman” from Sri Lanka, has been Mumbai’s trump card with the ball. Whenever he has done well, Mumbai have generally been on the winning side. But if he has a bad day, it affects the whole team as they start looking listless in the field. In the absence of Munaf, his burden doubles and Mumbai would want him to bowl those toe-crushers more often.

Harbhajan has a tough choice to make while selecting the fourth and the fifth foreign player in the eleven. Symonds came into the IPL with minimal match practice and since the end of that tournament he hasn’t played any competitive game. The Australian is thus likely to miss out as Mumbai may opt for Jacobs, who can keep and open the batting. They need firepower at the top and Jacobs can perform that task. He may be partnered by Blizzard who showed shades of brilliance in the IPL but didn’t get a prolonged run. Harbhajan sure has a few selection headaches before him.

To be very honest, it isn’t fair to expect Mumbai to work wonders at the CLT20 2011. But nothing can be ruled out in the game of cricket and more so in T20. If Harbhajan goes the Shane Warne way and binds the unit which somehow manages to pull off something special, it would rank alongside Rajasthan Royal’s IPL triumph in 2008. However, it seems to be a remote possibility. 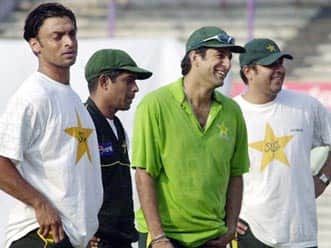