Dale Steyn steamed in. The attitude, aggression, the fire, the rhythm everything was evident. The speeds read mid-130s. Cricket awaited this moment for over a year.

Dale Steyn steamed in. The attitude, aggression, the fire, the rhythm everything was evident. The speeds read mid-130s. Cricket awaited this moment for over a year. Has he past his prime? The most optimistic minds too questioned.

Nevertheless the crowd remained ecstatic. Even the avidest Indian fan awaited Steyn’s return despite knowing that an in-form Steyn would nullify the visitor’s chances of winning in South Africa.

Steyn was missed. He is an ornament to this great game.

Vernon Philander threatened more till now. The final ball of Steyn’s second over saw Shikhar Dhawan being beaten by the movement, but he got enough wood to get a boundary. An interesting duel went on. Steyn and Dhawan have played together for Sunrisers Hyderabad in IPL.

Steyn started his third over with a gentle delivery in the good length area that Dhawan drove for 2. Dhawan had raced to 16 off just 12 balls. With the ball coming onto bat, Dhawan got carried away or else he would not have overtly attacked in the wee hours of the day’s play.

From a few gentle ones at the good length, Steyn switched to back-of-a-length. The extra pace did Dhawan who positioned himself for a pull, only to top-edge and sky it. Steyn called for it. It’s the tenth time he dismissed a batsman caught-and-bowled, the joint-most (with Richard Hadlee) in Tests. The chainsaw celebration ensued.

Steyn marked his return by entering the top 10 most wicket-taker’s table. He went past Harbhajan Singh’s tally of 417.

The contest only got more intense as Virat Kohli stepped out.

The next one was hurled at 141 kph. A surprised Kohli got a leading edge that almost carried back. The tone was set.

Kohli later fell on Day One to Morne Morkel’s first ball. The extra bounce and the away seam movement did him and not for the first time.

Steyn, Kagiso Rabada, Morne Morkel and Philander teamed up for the first time. India were up against inarguably the best pace attack in the world. South African pacers continued bowling with venom. Steyn’s coming back had led to spring in the steps of other three. The four pace-men, brilliant with their respective skill-set hunted in packs.

Before that, Rohit Sharma and Cheteshwar Pujara began the rescue work that was an uphill task, steeper than climbing the Table Mountain. Philander’s troubled with movement, Rabada was hostile with pace, Morkel with bounce and Steyn with pace and accuracy.

Rohit was playing ahead of Rahane. He had huge boots to fill. He had done all the hard work for 58 balls countering the difficult morning session. Rabada went wide of the crease and beat Rohit with pace and seam movement. Like Kohli’s fallibility to outswingers, Rohit’s perennial weakness are the ones that move in. He was trapped plumb.

Pujara braved the first session with his unmatched power of concentration.. He fell to Philander’s movement. That ball seamed away quite a bit and Pujara edged it to Faf du Plessis at slips.

Steyn seared in and recreated scenes of Nagpur 2010. He had got Wriddhiman Saha for 0 almost in the same way, dismantling his stumps back then in the latter’s debut. The ball reversed in, Saha let it go and it thudded to the back pad. He was plumb. Steyn triumphed. India were 92 for 7.

People have laughed at his technique. He has irked many with his attitude. His rise in ODIs gave him the unneeded tag of limited-overs specialist. Hardik Pandya is all about proving notions wrong. 2017 was about his rise. 2018 may see him elevate to another level.

No, he isn’t the most technically sound batsmen but his counterattacking methods acted as the oxygen mask that enabled India continue breathing in Cape Town.

Steyn has all kinds of tricks under his sleeves. He got Pandya to play straight to the gully but Dean Elgar dropped it. Pandya was on 15. He went on to pummel 93. Pandya would later haunt Elgar further by forcing him to edge to Saha during the end moments of the second day’s play.

There was no end to Pandya’s enthusiasm. His emotions ranged from laughter to fury. Then there was pain when a Rabada ball struck him on the groin. But never did he deviate away from the job in hand. He kept talking to Bhuvneshwar Kumar about the shine of the ball. They added 99 for the eighth wicket.

South Africa is a tough place to score. The bounce can get better of you. Pandya just strikes them all. Bowl him short he will happily ramp it over the keeper’s head. He eventually perished trying to do the same.

He later would send back the South African openers to emerge as the sole Indian wicket-taker on Day Two.

South Africa lead India by 142 runs and have eight wickets in hand. India minus Pandya would have been on a brink of defeat by now.

When Steyn left the ground at Perth in November 2016, many thought it was the last they saw him in whites. Your limbs are your greatest assets as athletes. The shoulder betrayed then. The much-awaited comeback did happen but Steyn left the field limping.

The leg seems to have betrayed now. He injured his left heel and was sent for scans. The return lasted 17.3-6-51-2. We hope it does last much much and much more. Fingers crossed 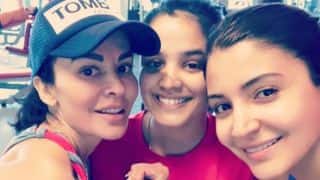 South Africa sweat on Dale Steyn's bruised heel, likely to be out for 4-6 weeks