Already walloped by Australia in the round-robin match of the ICC Women s World Cup 2017, India returned them the favour with interest in semi-final 2.

Already walloped by Australia in the round-robin match of the ICC Women s World Cup 2017, India returned them the favour with interest in semi-final 2. Chasing their second final appearance, the Mithali Raj-led India outplayed the defending 50-over champions. As expected the match saw breath-taking batting, shrewd bowling and astute captaincy on exhibition from both sides. For India, it was their T20 captain Harmanpreet Kaur, who blistered her third ODI ton to squish Australia s hopes of a cakewalk. In reply, Australian batswomen failed with the bat big time with no contribution by their big guns. Elyse Villani and Alex Blackwell did slow the inevitable but it was India that came out on top and rocketed into the final to face the hosts England. ALSO READ: Harmanpreet Kaur’s 171* knocks Australia out

Harmanpreet Kaur rewrites history: She strolled to the wicket when India were bumbling at 35 for 2. At the other end was captain Mithali Raj.

The rain had made the outfield heavier. The Indians had no option but to muscle harder to send the ball to the boundary line. However, the veterans saw off the new way, let the outfield dry as the clouds made way for sun to blaze on Derby, and thereon it was time for Harmanpreet to blaze..

Mithali got into her elements, but the Australians managed to keep a leash on her strokeplay. While trying to scythe one fine, she missed it completely, failing to bring her bat down in time. She perished for 36 off 61, adding 66 with Harmanpreet for the third wicket. LIVE UPDATES: India vs Australia, ICC Women s World Cup 2017, semi-final 2

In came the teenager Deepti Sharma. The scorecard read 101 for 3 in 25 overs, with 17 overs in hand to post an imposing total, and bang…

Harmanpreet scored her 10th fifty. She then converted it into her third hundred and second in World Cup. That was not it. She scored only the second 150 for India and the first in World Cup. After the end of 42 overs, her score read 171* (115).

Harmanpreet-Deepti have VVS-Ojha moment: VVS Laxman had blasted his state-mate Pragyan Ojha in the famous Mohali Test, against Australia. After Ojha hesitated to take another quick run so VVS could retain strike. The otherwise calm and composed Laxman gave Ojhaa mouthful. That, however, was buried soon as India eventually won the Test.

Same was the case with Harmanpreet and Deepti. When Harmanpreet was on 98, Deepti did not reply in time for the second run. By the time Harmanpreet was halfway, she screamed Deepti to cross her. At that time India needed Harmanpreet than Deepti. It made sense if Deepti sacrificed her wicket.

As the two completed the run, Harmanpreet took her helmet and banged it into the ground. Others remove their helmet, celebrate the hundred, and acknowledge the crowd. Harmanpreet did not care one bit. She was instead busy lashing out at her teammate.

I didn’t want to lose the wicket and I didn’t want her to lose her wicket as well. I got angry and then I apologised to her. It’s all fine now, said Harmanpreet after her record-breaking knock.

Australia top-order debacle: Australia s top 4 consisted of the likes of Beth Mooney , Nicole Bolton, Meg Lanning and Elysse Perry, who have been gathering runs like fire. Asked to chase down 282 to win, India knew they would have to dent Australia s power-4.

Shikha Pandey removed Beth with a beaming out swinger to rejoice watching the off stump cart-wheel in the air for 1.

The heavily experienced Jhulan Goswami, who was having quite a silent edition so far took the perfect chance to announce herself. Jhulan knocked over most dangerous looking Meg Lanning with a perfect out-swinger that certainly qualifies as one of the best deliveries of the tournament..

Nicole on the other hand, was deceived in the air by Deepti Sharma. Trying to drive Deepti over the covers, Nicole managed to chip the ball back to the bowler after she misjudged a dipping delivery.

Elyse Villani s resurrection: With Australia struggling it, it was the pair of Ellyse Perry and Elyse Villani that brought their side into reckoning. It was surprising that it was Elyse who overshadowed the more accomplished Ellyse in their 105- stand.

Elyse adopted the more unconventional role and took charge on Indian spinners. Even though Elyse was lucky to be dropped off Rajeshwari’s bowling, she took on her quite often. Elyse s flurry of boundaries ensured Mithali went on the back-foot enabling the pair to keep the scoreboard ticking without any fuzz.

Once Elyse fell for 75, the floodgates opened for Indian bowlers.

Alex Blackwell s valiant 90: Alex Blackwell did stick it out in the middle but was unable to deny India a 36-run win. Alex probably playing her last World Cup, could have done a James Faulkner, but ended up doing a Hardik Pandya. Her knock of 90 off 56 kept Australia in the hunt while teasing India a big win.

She was methodical in her batting, shielded Kristen Beams from spinners and kept the scoreboard ticking.

In the end the target proved too much for the defending champions, and India triumphed by 36 runs. 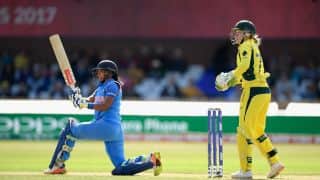