He was fast, ruthless, fuming, and on most days, unstoppable.He was, in other words, Harold Larwood. And to think of it, he was nicknamed Lol . Few sights could have been less funny than facing a rampant Larwood.

Harold Larwood, born November 14, 1904, was perhaps the most feared and hated bowler in Australia for a long time. Abhishek Mukherjee looks at a man often referred to as the fastest bowler in history.

Batsmen, Australians and Englishmen alike, trembled when he measured his run-up. They even feigned illness when it was their turn to bat. He never minded hitting batsmen, but got a real kick when he could send stumps flying. The Australians called him, even on print, Dirty , Liar , Craven Pommie bastard , Village bonehead . And, of course, we all know of the little girl at the theatre who, on seeing the fast bowler, exclaimed, Why, mummy, he doesn t look like a murderer!

He was fast, ruthless, fuming, and on most days, unstoppable. He was, in other words, Harold Larwood. And to think of it, he was nicknamed Lol . Few sights could have been less funny than facing a rampant Larwood.

Here is a look at 21 lesser-known facts about the man:

Before we explore into his bowling and other anecdotes, let us not forget that Larwood was a decent batsman. He had three First-Class hundreds. Promoted as night-watchman in the fifth Test of the Bodyline series at Sydney Cricket Ground, Larwood batted on, blissfully unaware of the score when Maurice Leyland told him you re 98 and asked him to watch out. The well-intended information backfired, and Larwood holed out. It remained the highest score by an English night-watchman till Alex Tudor scored 99 not out in 1999.

Larwood walked six miles each way every day to work in the dark of coal mines. When he went for his First-Class trial, his father Robert and he walked five miles to the station, and two miles from Nottingham Station to Trent Bridge. He carried his kit on his shoulder all the way. Larwood seldom went to gyms. It was his walks and beer that kept him going.

Larwood s first contract with Nottinghamshire was a mere 32 shillings a week the same he earned as a miner. There was no sick leave or travel expenses. In case there was no match he would still be expected to turn up for nets, rolling, ticket sales, etc. The contract also mentioned: Leave of absence shall only be granted by the Committee, or by the Secretary in writing.

Growing up, Larwood always knew that Jack Hobbs was the greatest batsman that ever was. On June 10, 1919 a 14-year old Larwood walked 12 miles to Trent Bridge to watch Hobbs bat. The Master was merely a hazy photograph for him till then. Resuming his innings at 72, Hobbs had reached 85 when Larwood settled down.

Fred Barratt bowled a short one, and William Flint took the catch at short-leg. Larwood had seen Hobbs bat for only one ball but clapped on till his palms turned sore and red.

Larwood was playing his second First-Class match at Bramall Lane, and was up against Herbert Sutcliffe. The great man pulled out at the last moment. Larwood looked back in horror to see it was his the metal clasp of his mother s handbag. Larwood dared not tell Sutcliffe that the bowler s mother was the errant one on this occasion.

When he later confessed to Sutcliffe, he was told back wryly: Youngster, don t expect your mother to help get you wickets.

Two years had passed since the Bramall Lane incident. A young tearaway now, Larwood had troubled Hobbs at The Oval. When Hobbs visited Trent Bridge, Larwood pitched one outside off; the ball bounced on the seam and shot back in to hit the off-stump. Hobbs dismissed it as fluke .When an encore happened in the second innings, Hobbs did not say the same words. In fact, he was largely responsible for Larwood making his Test debut at an early age.

Maurice Tate was the finest English seamer on his day. In 1924, at Trent Bridge, Tate had given Larwood two shillings when the youngster had cleaned his boots. Larwood later said: You could have eaten off the soles. I hugged them afterwards and held them close to my chest. Two years later Larwood and Tate arrived together to play the 1926 Ashes Test at Lord s.

Nerves showed on Larwood as he walked into the Lord s dressing-room. Hobbs was assigned the task of helping Larwood ease into the dressing-room. He tried to calm the fast bowler with the words You re here because you re fast. Larwood responded, all in awe, but you re Jack Hobbs! In his award-winning biography of Larwood, Duncan Hamilton wrote on Larwood s opinion of Hobbs: The name alone protected its owner from all human frailties…To be suddenly on casual first-name terms with Jack Hobbs was incredible enough.

Larwood acquired a BSA motorbike that was powerful for his era . Two days before the Lord s Test he had an accident at Nottingham. However, he pleaded the policeman to keep his name out of it. Wrapped in crepe bandages, Larwood took field at Lord s. The joint felt stiff, the muscles throbbed, Hamilton later wrote.

Harold married Lois in 1927. They had five daughters June, Enid, Mary, Freda, and Sylvia. June was born, you have guessed right, in June, of 1928. Larwood was fielding in the deep against Hampshire at Trent Bridge when the telegram arrived. Arthur Carr reprimanded him: You re supposed to be concentrating on the match, not reading messages.

Larwood commented, I ve got a baby girl, ; punched the air; Carr gave him the ball; and Larwood removed Alexander Hosie, Lewis Harfield, and Percy Lawrie in four balls. Phil Mead, who remained unvanquished with 89 at the end, came back to the pavilion and commented in his characteristic laconic style, Thank God it wasn t twins.

Larwood was a reluctant, half-a-pint-of-shandy man when he first came to Trent Bridge, but Arthur Carr was determined to convert him to beer: You cannot be a fast bowler on a bottle of ginger pop or a nice glass of cold water. So Larwood became a beer-drinker.

Carr decided to take things a step further. When he got Larwood to drink wine during a match, he stood on the ground and saw KS Duleepsinhji walk off. When he asked the umpire, he got the response: You ve just got him caught behind. Larwood immediately steamed in to bowl again, only to be stopped by Carr: the new batsman, after all, had not arrived.

It took a lot to soften a Douglas Jardine, but Larwood was special. During one of the drinks break Larwood refused to take the orange juice muck. Jardine had to tell Larwood that he could not have beer on the ground during a Test ( What would Lord s say to that? ). When the drinks tray returned, surely enough, at the centre of the tray was a camouflaged glass of beer that Larwood had to consume in two gulps.

Larwood and Bill Voce soon became the heaviest beer-drinkers in Nottinghamshire, and they carried the trend to the national side as well. An unsuspecting Eddie Paynter, a teetotaller who had never touched, tasted, or handled alcohol till then, was converted by the duo. Paynter later said: I took my first shandy…and have never looked back.

There have been several instances of terror inflicted by Larwood, but perhaps the most significant was the one where he hit Wilfred Rhodes on the foot. Off came the pad, the boot, and the sock, and Rhodes rolled in agony. The umpire walked up and asked Rhodes politely whether he could walk. When Rhodes said yes, the umpire s response was prompt: Walk right back to the pavilion, you re out LBW.

Placing a bet with Larwood was one of the pet games of the Notts camp. When Joginder Singh, touring for the Indians, turned up against them at Trent Bridge, Sam Staples promptly bet Larwood a packet of cigarettes that the latter could not knock his turban off. Soon afterwards a ball carried the turban towards the slips; Larwood tried an encore and smashed Joginder s face; the poor batsman had to be escorted off the field. He did not take any further part in the match.

George Brown of Hampshire had a novel yet stupid idea of needling Larwood: after taking two consecutive balls deliberately on his chest, Brown mocked Larwood: When are you going to bowl really fast, Harold?

A couple of seconds later Brown knelt on the ground. The blows had taken time to have an impact on him.

Poor Haydon Smith s story, though oft-recollected, is worth a mention. Haydon had a stammer, but could be quick on his day. His eyes had lit up at the sight of a Grace Road pitch, and he told his captain, I ll tell you what, s-s-skip, I think I ll b-b-bounce one or two. His captain tried to warn him, but it was too late.

Larwood and Voce gave it back to Leicestershire. When Smith himself walked out to face Larwood, a general let him have it chant came from the Notts fielders. The first ball went past Smith s nose. He backed out towards square-leg in the second, but the ball took the bat and flew to gully, falling just short of Staples. Smith walked off.

A bemused Staples admitted: It was a bump ball. I didn t catch it. Smith, however, was not to turn back: Yes, you f-f-f-f**king well did.

Unfortunately, the story is probably untrue.

But he was often surprisingly kind. Alf Gover was pulled out of his bath and shoved in as night-watchman, and was immediately hit on the box by Larwood. He walked up to Larwood and pleaded: Easy, Harold, they ve dragged me out of the bath. Larwood bowled outside the stumps for the rest of the over.

Well after retirement, Larwood went to Old Trafford to watch Lancashire take on Australian Infantry Forces. He stood in the queue like everyone else. Wally Hammond tried to convince him to come into the dressing-room, but he refused. George Duckworth, then Lancashire Secretary, pleaded: If you come back, you don t pay. Larwood did not come back.

Larwood spent a chunk of his post-retirement days in Australia, taking a job at Pepsi before joining Cottee s. He maintained a quiet life, oblivious of his own popularity. One day he found a letter sent from England delivered to him. The envelope merely said:

Larwood was 88 when John Major became Prime Minister. Major called Larwood in Australia soon afterwards to say: Yourself and Jack Hobbs are my heroes. Larwood sent him a rare photograph in return that of Hobbs and Larwood walking out to bat together.

Later, when Major s policies resulted in the closing of 31 coal-pits, Larwood s immediate reaction was: I d given him a right ear-bashing. 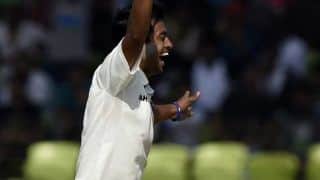 Bangladesh vs Zimbabwe, 3rd Test at Chittagong, Day 3: Jubair Hossain's five-for restricts Zimbabwe to 374; Bangladesh 23 for no loss at stumps