Harold Larwood, never one to lose focus during a match, was found reading the piece of paper during a match. A bemused Arthur Carr ran from the slips.

The telegram carrying the news of his first child being born reached Harold Larwood when he was fielding at Trent Bridge on June 13, 1928. Abhishek Mukherjee looks at the day when Hampshire ended up being the victim of joy.

Harold Larwood made his Ashes debut in 1926, and became an instant star in the humble collieries of Nottinghamshire that had bred many a fast bowler. His handsome features, trendy motorbike, fat wallet, and newly acquired glamour had suddenly turned him into one of the most eligible bachelors of the era.

By the time he had got his England cap, Larwood had already found the love of his life in Lois Bird, whom he had first met at “The Monkey Run”, a local walkway, a year before he had made his debut. Duncan Hamilton wrote in Larwood’s biography: “She was so petite that she barely came to his shoulder. She had a soft, gentle-looking face, like a primary-school teacher, and brown wavy hair that was always well kept.”

Lois did not understand cricket; however, as Harold would later admit, she would remain the fulcrum around which his life would revolve. But that would happen much, much later. As of then, Harold needed to convince his parents. Robert and Mary Larwood did not disapprove, but launched a convoluted investigation to find out details regarding this woman.

Once they were satisfied, Harold and Lois got married in secrecy at a registry office in September 1927 — a ceremony that involved only three people outside the registrar and the immediate families. They honeymooned at a boarding house in Blackpool, and for some reason, brought Harold’s parents with them.

It was just another June day at Trent Bridge, approximately nine years after Harold and Lois got married. Alexander Hosie had opted to bat, and though Sam Staples had struck an early blow, Larwood was not at his best. There was no Bill Voce, and Hampshire reached to the comfort of 148 for 3 with both Phil Mead and Hosie looking settled.

Was Larwood tense? We will never find out, but when the telegram was delivered to him, he was out there, near the ropes. Larwood, never one to lose focus during a match, was found reading the piece of paper. A bemused Arthur Carr ran from the slips.

“What’s that?” Carr demanded. “You’re supposed to be concentrating on the match, not reading messages.”

[Innocent question: Do irritated statements like these sound familiar to the SMS generation?]

Larwood looked ecstatic. “I’ve got a baby girl,” he exclaimed, punching the air.

Carr, that shrewdest of men, knew exactly what was to be done. He tossed the Larwood, who bowled at a pace seldom known before. It is difficult to say whether it was the adrenaline or the desperate urge to see his daughter that worked, but Hosie was caught behind before another run was added. Three more balls saw the stumps of Lewis Harfield and Percy Lawrie being flattened.

Having his tail up with 3 wickets in 4 balls, Larwood ran through the Hampshire run-up with 6 for 66. The tourists were bowled out for 253 largely due to Mead’s masterly 89 not out. The champion batsman was the only one from the Hampshire line-up who could stand up to a pumped-up Larwood (which, to be fair to the other ten men, was not many would have liked to do).

By the time the great man returned to the pavilion the good news had already spread across the ground. Mead uttered the words that have become a part of cricket folklore: “Thank God it wasn’t twins.”

The rest of the match

There was no play on Day Two. Larwood was not required to bat in the second innings. Wilfred Payton’s hundred, aided by four scores between 52 and 57, allowed Carr to declare 134 runs ahead, but the time was not sufficient. Larwood bowled his heart out (he finished with 2 for 15), but once again Mead came to his side’s rescue: they finished on 116 for 6, Mead unbeaten on 41. You cannot have everything, after all.

– Nottinghamshire finished third in that year’s Championship. Hampshire came twelfth. Larwood did not lead the wickets chart (in Tich Freeman’s era almost no one else got a chance) but finished with 116 wickets at a ridiculous 14.10 (best among those with a hundred wickets).

She had her perks, too. When the nation raised a toast to her father on his return from Australia after the Bodyline series, the man got down from the train, a gift for the four-year old in his hand. The toy koala was christened Billie Bluegum, and stayed with the Larwoods. 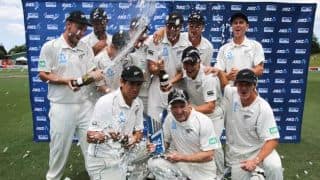 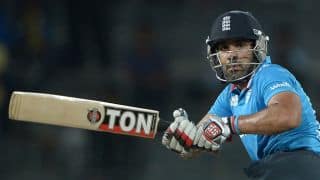