The Indians, during their 1932 tour of England, were up against Nottinghamshire.

July 4, 1932. The Indians, on their tour of England, faced a star-studded Nottinghamshire at Trent Bridge less than a week after their first Test. As expected, they were no match for the ruthless pace of the Notts southpaws. Abhishek Mukherjee looks back at bet that resulted in one of the strangest injuries.

There was an era when Australians considered the Yorkshire tour match at Bramall Lane the sixth Ashes Test of the tour. The no-nonsense Yorkshiremen played their cricket hard, the crowd was as perfectionist as they made them, and they hated to lose more than anything else. To some, the match was as tough as any contest they encountered on a tour to England.

Trent Bridge of the late 1920s and early 1930s, though not quite in the same league, was an extremely formidable fortress. After coming second in 1922, 1923, and 1927, Nottinghamshire finally managed to clinch the County Championship in 1929.

The legendary Dodger Whysall’s sudden demise created a gap in the batting line-up, but Arthur Carr’s men were as fearsome as any other. The Staples brothers, Sam and Arthur, were there, as was Joe Hardstaff jr; the ever-reliable Ben Lilley was a prominent presence behind the stumps. Walter Keeton and Willis Watson formed a solid pair at the top.

But most importantly, there was a pair of fast bowlers — probably the fastest in contemporary cricket. Both emerged the coal pits of Nottinghamshire. Both terrified batsmen across the country, and beyond. Both would cause many a stir in a few months’ time.

Yes, Carr’s biggest weapons were, without a doubt, Harold Larwood and Bill Voce. Not only did they run through opposition batting line-ups, but they also terrorised them with their pace and uninhibited bouncer barrage. Carr seldom bothered to restrict them. If anything, they were egged on by their teammates, who placed bets on them being able to knock out certain batsmen.

To be fair to the Indians, they were having a decent tour. Till then they had managed to draw against Sussex, Glamorgan, MCC, Essex, and Lancashire. They went a notch higher against Northamptonshire, Worcestershire, and both Universities, winning the contests.

They also fought hard in the Test at Lord’s. England were reduced to 19 for 3 before recovering to 259. India, going strong at 110 for 2, collapsed to 189. And then, set to chase 346, they fought hard before going down by a 158-run margin. All in all, the Notts match was expected to be a keen contest.

The Maharaj of Porbandar opted out of the match, leaving KS Limbdi to lead. The match also featured George Gunn (playing his last First-Class match) and his son George Vernon Gunn. Gunn Sr fell for a duck, but Nottinghamshire had a recovery of sorts when Carr and Arthur Staples took them to 93 for 3.

Then that man Amar Singh — of whom Wally Hammond, no less, said that “he came off the pitch like the crack of doom” — hit back at Nottinghamshire. With Mohammad Nissar providing support at the other end, the hosts were reduced to 128 for 8.

Then Voce added 23 crucial runs with Larwood and 37 more with Sam Staples. Nottinghamshire were bowled out for 188, with Amar Singh claiming 7 for 55.

It was Voce’s triple-strike that rocked the Indian top-order, leaving them reeling at 23 for 3. Larwood ran through the defence of CK Nayudu, and Arthur Staples took 3 wickets to dent a substantial hole in the middle-order.

Joginder Singh was a relatively obscure name among the tourists. His 23-match First-Class career would amount to 1 fifty and 2 wickets, so he was certainly not one of the bigger guns.

Nate D Sanders, on their auction list, were kinder to him. They called Joginder “a class batsman with a large variety of strokes” and “a very good slip field and change bowler”. He also kept wickets.

Joginder, his head wrapped in a turban, walked out at 106 to join Nariman Marshall. They pair batted till stumps, and the Indians finished on 113 for 8 with Marshall on 3 and Joginder on 4. They were still 82 behind.

The bet and the turban

The next day was a Sunday, which meant there was no play. The Nottinghamshire bowlers were discussing the match, and the turban became the obvious target. Sam Staples placed a bet: if Larwood managed to dislodge Joginder’s turban, he would win “a packet of smokes”.

Note: Sources vary on the person and the stake. While Duncan Hamilton mentions the packet of smokes in Larwood’s much-acclaimed biography, Chris Waters, in 10 for 10: Hedley Verity and the Story of Cricket’s Greatest Bowling Feat, wrote that it was Voce who challenged Larwood, the wager being “a pint of beer or a packet of fags.”

What followed was brutal. A few minutes into the second day’s play, Larwood unleashed a menacing bouncer. Joginder was no match for it; the ball lifted the turban, deflecting it towards the slips.

The bet had been won. Larwood could have stopped at it, given that the batsman in question was not among the best he had bowled at in his career. But he continued to bounce. Joginder’s resilience finally gave in as the ball hit him on his face. He left the field, covering his bloodied check with a piece of cloth.

The hosts acquired a 63-run lead, but ran into trouble once again. This time Nayudu was the wrecker-in-chief, taking all five wickets as they slumped to 78 for 5. They led by 141. Then Charles Harris (67) and Ben Lilley (55) began the rearguard action.

The sixth wicket saw 43 being added; the seventh, 94; the eighth, 71. By the time Naoomal Jaoomal finally wrapped up the tail, they had scored 288. The lead had been stretched to 351, thanks to some fun towards the end by Larwood.

The Indians did not put much of a fight after that. Already a man short and with Larwood and Voce on rampage, they were reduced to 84 for 7. It was Lall Singh’s spirited batting that took them to the 100-run mark. They were bowled out for 127.

– A week after that Larwood hit Arthur Mitchell of Yorkshire (the match immortalised by Hedley Verity’s 10 for 10 — the best figures by anyone in First-Class cricket). Mitchell was “trying to dodge a bouncer when the ball hit the back of his right hand with a resounding crack” (Waters). His fingers were numbed, but Mitchell resumed.

– India continued with their good job. They drew against Middlesex, Glamorgan, Warwickshire, Surrey, and the Scarborough Festival match, and beat Gloucestershire, Somerset, and Leicestershire (by an innings).

– Nottinghamshire came fourth in the table that season. Their bowling charts were led by Larwood (141 wickets at 11.62, his average being the best of the season for anyone with over five wickets) and Voce (106 wickets at 16.79). 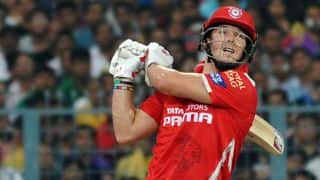 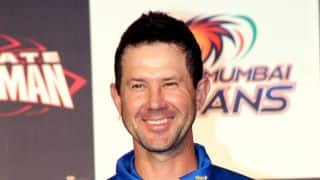