Harshal Patel's 3 for 43, Virat Kohli's fifty and other highlights from Delhi Daredevils (DD) vs Royal Cha

In what was the dead rubber of the tournament, Virat Kohli‘s Royal Challengers Bangalore (RCB), who had last won a match almost a month ago, finally managed to end on a high. RCB beat Zaheer Khan’s Delhi Daredevils (DD) by 10 runs, in match 56 of the Indian Premier League (IPL) 2017 at the Feroz Shah Kotla Stadium in New Delhi on Sunday. Although the win did hardly any favour to RCB, as they managed to remain at the bottom of the table, it was a good win for them, especially for skipper Kohli. It turned out to be a great confidence booster for him, with a fine innings of 58, as he prepares to lead India in the upcoming ICC Champions Trophy 2017. Meanwhile, let us have a look at the highlights, the final league stage game of the tournament produced. Full Cricket Scorecard: Delhi Daredevils (DD) vs Royal Challengers Bangalore (RCB), IPL 2017, Match 56 at Delhi

New opening partner for Chris Gayle: In what surprised the RCB fans early on in the innings was this mysterious new opening partner for Chris Gayle in the form of Vishnu Vinod. Usually, Gayle was accompanied by either of Kohli or Mandeep Singh. However, Vinod’s promotion so up the order did raise some eyebrows. Nevertheless, he failed to make an impact and flopped. He was cleaned up by Pat Cummins for 3.

Virat Kohli’s 58 and the ‘glam shot’: With RCB suffering an early setback, skipper Kohli had to step in and collaborate with his regular opener Gayle. Despite the early setback, Kohli held his nerves and made sure that he gives RCB a chance to fight in this tie. He went on to play a firm innings of 58 off 45 deliveries, including three boundaries and sixes each, along with a strike rate of 129. He was also involved in a 66-run stand with Gayle which allowed RCB to recover from the sloppy start. Full Cricket Updates: Delhi Daredevils (DD) vs Royal Challengers Bangalore (RCB), IPL 2017, Match 56 at Delhi

Here was one shot that can be termed as one of the finest in the tournament.

Gayle-Kohli’s stand of 66: As said above, it was Kohli along with his regular opening partner Gayle, as they both played some sensible cricket and together brought up an important stand of 66, which allowed RCB to recover from the sloppy start. Gayle contributed 22, while Kohli contributed 44 runs in the stand, therefore giving a hard time to the Delhi bowlers. It was this very stand, which gave RCB the platform to post 161 for 6, and provided RCB a fighting chance. There is a chance that this is the final time Kohli and Gayle batted together for RCB.

Pat Cummins’ 2 for 21: Among the Delhi bowlers, it was their Australian pacer Cummins, who was the star of their bowling attack, as he bowled with great pace and ended with figures of 2 for 21, therefore not allowing the RCB batsmen to free their arms much. His wickets included that of Vinod and Sachin Baby, as both were crucial enough to restrict the RCB total.

Kohli vs Zaheer: In one of the interesting highlights of the RCB innings was the dismissal of Kohli. Being at the score of 52, Kohli looked to go after none other than India’s one of the most successful pacers Zaheer, who also was playing his 100th IPL game. The very first ball of the 17th over saw him being dropped by Zaheer himself, as a difficult catch straight back. The next ball was dispatched for a six over deep midwicket. However, to his little knowledge, and Zaheer’s tons of experience, Kohli was deceived by a cutter that saw Kohli get dismissed off the next ball, as he handed a catch to Shahaz Nadeem at long off. Pawan Negi’s gives RCB a fiery finish: With RCB yet to touch the 150-run mark, it was Pawan Negi in the final over to Corey Anderson, who struck three blistering boundaries to allow RCB go past 150 and finish on a pale total of 161. He managed to score just 13 runs off five balls, therefore allowing RCB to finish on a top note and putting themselves in a good position to defend the total.

Rishabh Pant’s fightback innings of 45: DD batsmen had themselves to blame for giving away their wickets to rash strokes. Sanju Samson and Karun Nair did not make use of their rich form and it was all up to Rishabh Pant to see them through. Pant’s 45 included three boundaries and a couple of sixes, and kept DD in the hunt. He was also involved in a fine 46-run stand along with Shreyas Iyer, which certainly kept Delhi on its toes.

Harshal Patel’s comeback: Playing his first game this season, Harshal Patel made a strong statement. His third over did the job for RCB when he dismissed Iyer and Marlon Samuels off back-to-back deliveries. Later, he came back and dismissed Pant which turned out to be the final nail in Delhi’s coffin.

Mohammed Shami’s fight with the bat: Despite being a bowler, Mohammed Shami surprised everyone, when he tried to show some resilience with the bat. He slammed a quickfire knock of 21 off just nine deliveries, including three boundaries and a six, taking RCB close to the end stages of the game. However, Negi brought it to a halt.

Pawan Negi’s stars again: In what turned out to be the star of the RCB’s bowling attack, Pawan Negi turned the tables with a spell of 3 for 10. Bowling at the death, he claimed the three lower order wickets of Amit Mishra, Mohammed Shami and Shahbaz Nadeem to end the DD hopes. Needing 13 to win from the final over, Negi gave away just 2 from it. 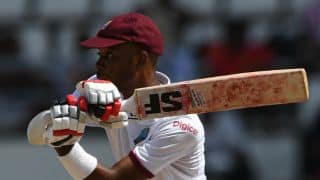