Sri Lanka ended Day four on 110 for the loss of one wicket against South Africa.

A cracking contest between in-form Sri Lanka and a South African side rebuilding after the retirement of colossal figures are evenly matched going into the final day of the first Test at Galle. R Vishal looks at past records and explores how things can pan out on the final day at Galle.

Irrespective of the outcome of the Test, Hashim Amla has laid down the template of his captaincy going into the future. South African side under his stewardship will attack and go for a win at every given opportunity. Despite building the side brick-by-brick and assembling a near dream team when he was at the helm, Graeme Smith was occasionally maligned for being conservative. The epic contest at Johannesburg against India presented a chance for the Proteas to chase down a world record total. With  still a few overs remaining at the close of Day five, South Africa decided to play out for a draw. The knives were out and Smith’s side was criticised for not going for the kill.

Amla on the other hand challenged the hosts to score 370 off 122 overs. An audacious move for a first time skipper which could make the bearded batting wizard look stupid, if Sri Lanka chase down the target. As things stand, Sri Lanka marginally hold the upper hand having made a cracking start. Kumar Sangakkara is at the crease and looked in complete control of the proceedings, as Day four drew to a close.

Despite South Africa’s shockingly poor record in Sri Lanka, Amla decided to take a chance. After winning majority of the sessions in the Test, the final session of Day four ended poorly for the visitors. Sangakkara’s magnificent run of form in this calendar year continued after he brought up another half-century and Kaushal Silva looks like he has put a hefty price tag on his wicket.

Dale Steyn’s five-wicket haul in the Island nation in the first innings had the Lankans on the mat. The tearaway pacer dismissed Upul Tharanga early in the second innings too. South Africa’s spin leader, Imran Tahir was dealt with ease and one wonders, if that will cost them dear. The Rainbow Nation continues to search for a world-class spinner to complement their phenomenal pace triumvirate. Tahir will have a huge part to play and must use his subcontinent know-how to full effect.

Steyn has now proved that he can leave batsmen clueless on any track. It is he, who should infuse a dollop of inspiration to his side. Perhaps an early wicket can set the tone.

As mentioned earlier, Sri Lanka hold the advantage because of their current position and the wealth of batting still left to come. This group of players under Angelo Mathews have the know-how in this calendar year to eke out wins and find men, who can battle adversity. They have looked a little rusty in the Test. Despite needing to score their runs just over a measly two runs per over, history is not on their side. Chasing targets in Sri Lanka, irrespective of the format has turned out to be a herculean task. The batsmen should target Tahir and Duminy’s slow bowling, and nullify Steyn’s ever-present threat. It will be interesting to see the approach Sangakkara and company will adopt. 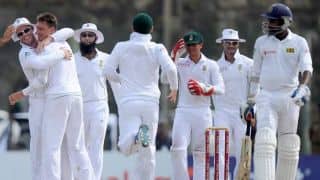