Broad picked up his second hat-trick of Test career when he dismissed Sangakkara, Chandimal and Eranga

Stuart Broad picked up his second hat-trick of his Test career when he dismissed Kumar Sangakkara, Dinesh Chandimal and Shaminda Eranga of Sri Lanka. Abhijit Banare look to some interesting facts related to hat-tricks.

After Stuart Broad’s hat-trick against Sri Lanka, a hat-trick has been achieved 41 times in Test history. Below is the list of hat-tricks and interesting trivia on hat-tricks.

Below are some of the hat-trick trivia:

Harbhajan Singh, Darren Gough, Broad and Nuwan Zoysa are the only players to have taken a hat-trick in Tests and have been victims of a bowler’s hat-trick too.

Pakistan have taken four hat-tricks and all of them have come against Sri Lanka.

The longest hat-trick is by Merv Hughes spread across two innings against the West Indies at WACA in 1988-89. His hat-trick was spread over three overs.

Irfan Pathan has taken a hat-trick in the first over of a Test and Zoysa took a hat-trick during the first three balls of the Test.

Courtney Walsh was the first to take hat-trick in split innings at Gabba, Brisbane against Australia in 1988-89, a feat achieved by Hughes of Australia in the very next Test of the series at WACA. Till date, such a feat has been repeated only by Geoff Lawson of Australia.

Mohammad Sami and Wasim Akram are the only ones to have a Test and a One-Day International (ODI) hat-trick. Akram is the only one to have achieved hat-tricks twice in both formats.

Hugh Trumble and Patherick’s hat-tricks involved catches in all three dismissals with one of them being caught & bowled. The next one to have done that is Broad in the ongoing Test match against Sri Lanka at Headingley.

Matthews’ hat-trick against South Africa in 1912 in the first innings didn’t involve the fielder, as it included one bowled and two lbws. This was next achieved by Dominic Cork with one bowled and two lbws in the second innings against the West Indies at Lord’s in 1995. Others in this list include; Lawson and Sami.

Sohag Gazi is the only bowler to take a hat-trick and score a century in the same Test. 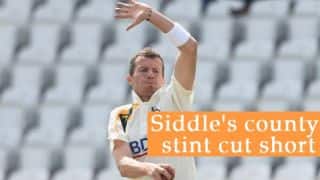