Everyone is scared of injuries, and the list is too long to be dealt with.

There will be some who will maintain that cricket, being not a full body-contact sport, is not the most dangerous of all outdoor sport. Plenty of injuries — especially above the throat — across its chequered past have, on the contrary, made cricket more dangerous than it meets the eye; Abhishek Mukherjee lists a few in the third and final part of this series.

Nothing about Kumble was suave; yet everything about him was imposing. When hit by Mervyn Dillon, he spat out blood and continued to bat. On his return it was diagnosed that he had a fractured jaw and would not take any part in the tour. He was to take the next flight home.

But if the plane was in the evening, why not bowl in the afternoon? Kumble walked out with a bandaged jaw — the bandage had to be reset after every over — and he bowled 14 overs that day. He also trapped Brian Lara leg-before (can there be a better tale than that to tell your grandchildren?).

The Australians steamrolled over the tourists during the Ashes yet again; it was a lost case for England after Nasser Hussain put Australia in and Simon Jones broke down at The Gabba. Chris Silverwood broke down at WACA, and for a while it seemed that England, despite humiliating defeats, would finish the Test with a few fit fast bowlers.

Brett Lee did not let that happen. Tudor ducked into a bouncer from Lee and as the ball hit his helmet it seemed for a while that he might have lost an eye. Fortunately he got away with a gash, a few stitches, and a headache that lingered for a few days.

South Africans are adept in handling pace perhaps from the age of three, but Shoaib Akhtar could be too fast even by South African standards. Kirsten, batting at three after Herschelle Gibbs and Graeme Smith had formed a new pair at the top, tried to hook Shoaib, and found it too quick for him.

A serious blow on the cheek forced Kirsten to retire hurt, but Kirsten, being Kirsten, came back in the second innings: he scored 46 batting at six.

Irfan Pathan bowled at a brisk pace in his early days, and during a VB series encounter he bounced at Mark Vermeulen. The Zimbabwean top-edged the ball, which made its way between his helmet and visor, hitting just above his right eye; it required a three-and-half-hour surgery to cure him.

It took several visits to a psychiatrist, but Vermeulen’s career seemed to be over by 2004. He eventually came back after a ten-year hiatus in 2014.

Steve Harmison’s bouncer was not an outstanding one, but it was on target and fast; it caught Ponting, perhaps the greatest back-foot player of his era, off-guard, was too late on the attempted hook, and the hostile bouncer ended up making its way between the helmet and the grille.

It was a minor gash, Australia won the Test, but in a way it set the tone of the series: England regained The Ashes after close to two decades.

Of all men playing a hundred Tests, Langer probably had the worst hundredth Test. After South Africa scored 303, Makhaya Ntini bowled a short-pitched one first up. Langer ducked, but the ball did not rise as much as he had expected — and hit the side of his helmet. He went on to suffer from concussion for three days, and was ruled out of the Test.

However, when Michael Kasprowicz (as good as the last man) walked out to join Brett Lee with 19 runs still to score, Ricky Ponting found Langer padded up: he was determined to go out if it came down to that. Thankfully, Lee and Kasprowicz scored the remaining runs. Ponting later confessed that if the ninth wicket had fallen, he would have declared the innings closed and accepted defeat rather than risk Langer’s life.

Langer played for a few more months, but never fielded at his trademark bat-pad position again.

A fallen Chanderpaul is not the commonest spectacle on a cricket ground, but on that occasion he both ducked and took his eyes off Lee’s ball; the ball hit the back of his head, and Chanderpaul crashed to the pitch, unconscious. The camera panned on his wife, crying in the stadium.

But The Crab (or as they call him in the islands, Tiger) stood up; Lee retaliated with a bouncer; Chanderpaul evaded it with ease; Lee tried to york him; Chanderpaul adjusted and hoicked him over square-leg for four; and then, with a straight drive off Stuart Clark, he reached yet another hundred with Mrs Chanderpaul applauding with a smile on the stands. He was eventually last out for 118.

With the lead already built up, Broad, having already taken six for 25 in the first innings, went after the tourists; he carted Varun Aaron for consecutive sixes off two short balls, which did not do any good to Aaron’s temper. The next ball was seriously fast; Broad still went for the hook, but had underestimated the pace, and the ball made its way between the grille and the helmet, smashing his nose.

Broad’s absence was not felt by England; after the initial blows from James Anderson, the youngsters led England to an innings victory.

It could have been the first major injury of its kind, but the scorcher from Jones had gone so close to Grace’s face that it is rumoured that the ball singed the most famous beard in the history of the sport (Stanley Jackson, who was at the non-striker’s end, and CB Fry, also playing in the match, both confirmed that the ball had gone perilously closed). No serious injury happened, but Grace was not a happy man; the following conversation ensued:

Grace: Here, what’s all this?

Read Part 1 of this article

Read Part 2 of this article 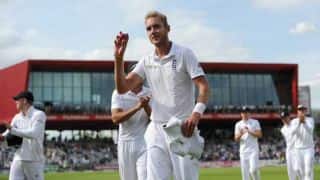 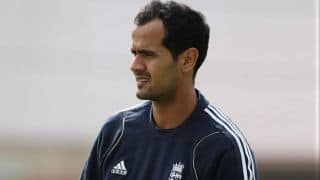