Taking over the responsibilities as captain of a team is not an easy task, especially whose career span begins right from the 90s. There have been questions even for the India’s men team on how Virat Kohli can manage the responsibilities if MS Dhoni plans to retire anytime soon. Similar is the case for England Women’s Charlotte Edwards and Heather Knight. On May 11, Charlotte put a full stop to her 20-year old international cricket career. As soon as the news broke out, it did surprise many. Since 2005, Charlotte took over the captaincy from Clare Connor. ALSO READ: Charlotte Edwards’ unmatchable contribution to women’s cricket will always be remembered

Under her leadership England have won the ICC Women’s Cricket World Cup 2009, T20 World Cup as well as winning four Ashes. In the recent T20 Women World Cup 2016, she led her side to the semi-final, before losing to Australia Women. Heather was Charlotte’s deputy right since 2014.

From Charlotte Edwards to Heather Knight:

Heather knew it was not an easy task especially after someone who had immense experience for years. Charlotte’s retirement marked the end of an era and Heather started off as the new generation skipper. As it was unknown to many, Charlotte’s world turned upside-down when she was sacked by England Women’s head coach Mark Robinson. Knowing the fact England were wilted against young and sturdy Australia Women in T20 World Cup 2016 semi-final, Robinson was forced to take this decision. If she might not realise this, Charlotte has done her country proud after this decision.

Heather, in hindsight, is a young, confident individual who is driven towards her goals. When the decision to pick Heather as the next skipper was announced, Robinson was all excited and knew she was the right person with his quote that said, “We have an outstanding individual in Heather Knight. She is stubborn, she has her own opinion which is absolutely how it should be, she is comfortable in her own skin, she is comfortable in her own company and they are great qualities to have in a captain.” Heather was left with big shoes to fill when she turned to be the next England captain in June 2016. ALSO READ: Heather Knight named England Women captain

England Women who dominated after donning captaincy role immediately since 1990:

Heather has already begun her new role in all positive way by whitewashing Pakistan Women in the three-match ODI series that ended on Monday. She also achieved few milestones in the process but achieving a whitewash with immediate effect is surely an indication of England’s bright side coming up. It is not just Heather; there have been England captains earlier who have won ODI series and championships as soon as they took over the role of captaincy. Below is the list of England Women captains from 1990 who were effective with their new role immediately and the teams they played against:

Heather Knight’s career before and after captaincy:

Prior to reaching this stage, Heather achieved recognition in domestic cricket especially for Berkshire in County Cricket where she built her captaincy skills. She also became prominent part of WBBL’s Hobert Hurricanes. The right-hand top order batter is not only her best with the bat but also the ball. She made her debut in 2010 while playing against India Women away from home and was off the mark right away with her knock of 49. Heather whose accumulated 1,342 runs in ODI cricket in comparison to Charlotte’s 5,992, does realise she has long way to go rather than aiming for records set by her predecessor.

A happy Heather on winning the first ODI match being the captain had said, “It was a big day, a proud day for me and there were some nerves this morning, definitely. But I didn’t feel any extra pressure. Charlotte has been outstanding for English Women’s cricket but I always said from the outset that I would captain the side my way so the fact that I was following her was not something I was thinking about. ALSO READ: Heather Knight creates world record on captaincy debut

She achieved new records to her name as well in the first game as a captain that included:

–  Scored a half century in the same ODI match against Pakistan Women.

Two different individuals and same role as captain for two different teams with Heather following her dreams as captain for the national side and Charlotte will be very much seen in domestic front captaining Southern Vipers in the upcoming inaugural Women’s Super League. The tournament is quite similar to Australia’s Women’s Big Bash. 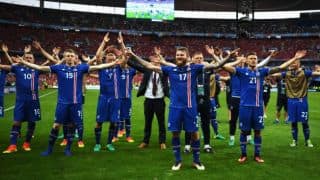