Hedley Verity, arguably the greatest left-arm spinner between the Wars, was once taken apart by Jock Cameron at Bramall Lane on June 24, 1935. Abhishek Mukherjee looks back at a famous comment from Arthur Wood.

Not many bowlers could claim of earning the respect of Don Bradman. But then, Hedley Verity was no ordinary bowler.

These were not one-off performances. Only once in his five-season career till then had Verity gone for an average of over 14 in a season and even that was 17.63, in 1934. It would remain the only English season where he would finish with a bowling average of over 16.

Verity was in supreme form. Earlier that month he had taken 9 for 99 against Kent, 14 for 78 against Hampshire, and 13 for 97 against Leicestershire. The last match, at Headingley, got over the day before the match in question, at Bramall Lane.

South Africa toured England that season. A week after the match they would win their first Test on English soil, at Lord s, no less. They would draw the remaining Tests and also clinch their first series in England.

Yorkshire fielded a full side for the tour match. The South Africans were bowled out for 263 after being 116 for 1 at one point. Yorkshire then collapsed against Sandy Bell and Xen Balaskas for 201. Herby Wade ordered for quick runs, and while the tourists kept losing wickets, wicketkeeper Jock Cameron exploded into a no-holds-barred attack.

Bill Bowes and Frank Smailes, the new-ball bowlers, had done their job with 11 wickets in the match between them. Unfortunately, Verity never got going. He bowled tightly in the first innings (9-5-20-0), but was comfortably out-bowled by fellow left-arm spinner Horace Fisher (4 for 52).

In the second innings Verity fared worse as Cameron singled him out. The great man went for 14-2-87-0. The other 214 runs took the South Africans 79 overs, so it can be fairly assumed that Verity was targeted.

Verity was dismissed over the Bramall Lane pavilion off the first ball of one of these overs. The next three balls were each hit for fours. Then Cameron decided to loft the next two for two more sixes.

Verity was visibly upset. As the fielders changed over, wicketkeeper Arthur Wood approached him. Wood was no ordinary cricketer himself: he played 222 consecutive matches on the trot for eight years a run that would end that same season. In fact, the streak ended only when his captain Brian Sellers overheard him boasting about the feat ( in that case, Arthur, you deserve a rest ).

Wood also had a terrific sense of humour. Once, when a batsman missed three consecutive balls, all of which brushed the stumps, Wood asked innocently: Have you ever tried walking on water?

This was different, for Verity was a teammate. Wood walked up to him.

Don t you worry, Hedley, you have got him in two minds, said Wood, referring to Cameron.

Verity was clearly dumbfounded. Cheering up a bowler was fine, but Wood was probably overdoing things a bit: Two minds? What do you mean two minds?

The answer was quick: Oh, he doesn t know whether to hit you for four or six.

Wade declared on the final morning as soon as Cameron reached his hundred. Up against a target of 364, Yorkshire crumbled for 235 against Balaskas, who finished with 12 wickets in the match.

Three years after the match, Wood was summoned at the last moment to play The Oval Test of the 1938 Ashes. It was urgent, so he travelled from Nottingham to London in a taxi; when he was told the fare ( 7 15s) he responded that he did not intend to buy the taxi.

He did not need to hurry, for Len Hutton batted on and on for his 364. Wood was not needed till the third day of the timeless Test (there was a rest day in between). He walked out to bat at 770 for 6 but not before he uttered aye, I m always [the] man for crisis.

He later found out groundsman Bosser Martin, the man who helped create the pitch that yielded 903 for 7: Bosser, there are some holes in your pitch.

When a confused Martin asked what he was talking about, Wood responded aye, six: where the stumps go in. 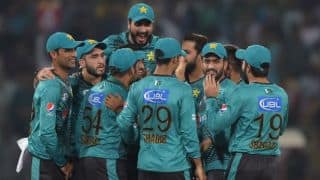