Henry Olonga was Zimbabwe’s first black player, but more importantly, he joined hands with Andy Flower and bravely stood up to tyranny.

Henry Khaaba Olonga, born July 3, 1976, was Zimbabwe’s first black player and one of the most courageous cricketers to have taken to the game. Prakash Govindasreenivasan looks back at the career of the man who joined hands with Andy Flower and bravely stood up to tyranny.

When cricket truly belonged to the gentlemen, out came a fine one from the landlocked African nation of Zimbabwe, to become the first black player to play for his country and make them proud of his forthrightness and honesty that upheld the game’s values and humanity at large.

Olonga’s drama-filled career had a roller-coaster-like beginning. He was only 17 when he made his debut for Matabeleland in the Logan Cup when he took five wickets against Mashonaland. He suffered an indifferent form in the following season. But to his surprise, he was called up to the national side for the series against Pakistan in 1994-95.

His first tryst at the international level saw him pulled up for ‘throwing’ during the tour match. He became the first player to be no-balled for an illegal action since Australia’s Ian Meckiff in 1963-64, while playing against South Africa. Olonga, went back to the drawing board and worked hard on his action under the able guidance of Dennis Lillee.

To iron out the flaws, he reworked his action entirely and came back as a rejuvenated cricketer. Olonga was probably the quickest bowlers to emerge from Zimbabwe but had the drawbacks of being a bit erratic with his appetite for bowling regular no-balls and wide deliveries.

In his short career, Olonga found his toughest opponent outside the cricket field. Zimbabwean President Robert Mugabe began to infiltrate into the selection policies of the team. By 2000-01 season, Mugabe charted out a quota system for the selection of a minimum number of black players in the team. This policy was pro-racism and was clearly against the spirit of the game.

Zimbabwe’s erstwhile skipper Andy Flower was abhorred with these newly-placed rules and decided to go up against it. He approached the then 26-year-old Olonga, thinking the latter has the understanding and a high sense of morality to join the cause.

“I thought Henry might grab the concept and have the courage of his convictions to take a stand. I also thought the fact that it would be one white Zimbabwean and one black one operating together gave the message the most eloquent balance,” Flower said in an interview with BBC.

On the eve of Zimbabwe’s first match in the ICC World Cup 2003, Flower and Olonga released the following statement: “In all the circumstances, we have decided that we will each wear a black armband for the duration of the World Cup. In doing so we are mourning the death of democracy in our beloved Zimbabwe. In doing so we are making a silent plea to those responsible to stop the abuse of human rights in Zimbabwe. In doing so, we pray that our small action may help to restore sanity and dignity to our nation.”

Knowing Mugabe’s political prowess and his ability to arm-twist the law, this move came as one of the most courageous acts in the history of world sports. Olonga, being a black player himself, would have had to brace himself for a lot of brickbats and hate from a lot of his countrymen who believed in Mugabe’s regime.

At the end of the tournament, Olonga announced his retirement and went into hiding after an arrest warrant was issued against him on grounds of treason, which could have led to a death penalty in Zimbabwe. The situation was unreal as an honest voice against a tyranny was being unlawfully suppressed. Olonga moved to England shortly after the tournament as he began to get death threats.

In his autobiography titled Blood, Sweat and Treason, Olonga recounts the dramatic turn of events and says, “My life could have ended three or four times but there’s a reason I’m still here. The three or four weeks after we made our stand, they got really angry and I had never felt so vulnerable, but we believed the government wouldn’t do anything to us while there was a watching world. One of Mugabe’s ministers said to me, “Wait until the World Cup is over”. I knew that I faced a race against time to get out.” 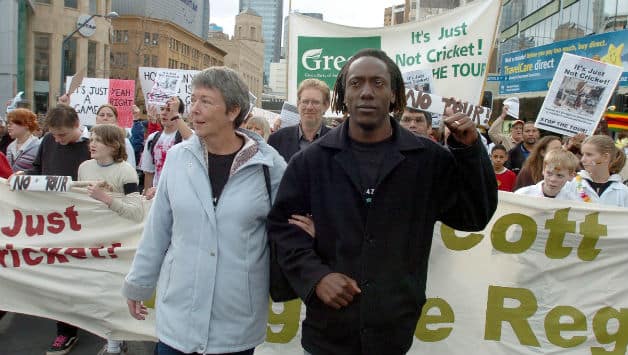 While Olonga was the epitome of honesty and truthfulness off the field, nothing much changed when he came on to it. He was included in Zimbabwe’s squad in the 1996 World Cup, but had to wait in the wings till the end. Eventually, when he was drafted into the playing XI in the final match against India, he humbly requested to not be considered due to lack of practice.

Olonga’s best on-field moment came in 1998 when he laid the platform for Zimbabwe’s second Test win, against India at Harare. After the visitors skittled Zimbabwe out for just 221, Olonga got Zimbabwe early breakthroughs and jolted the middle-order to keep India’s lead down to just 59. Zimbabwe managed to post 293 in their second essay and set for India a target of 296. Olonga returned to jolt the Indians on the fourth day of the game by dismissing opener Nayan Mongia in the second over. The procession thus followed and Zimbabwe pulled off a 61-run victory.

He was also instrumental in Zimbabwe’s first overseas win, this time against Pakistan in the same year. He had some unfinished business, some unsettled scores with the Asian giants after making a forgettable debut against them in 1995.

The situation was a lot similar to the home win over India, only that Olonga took Zimbabwe to victory with his performance in the second innings.

Skipper Alastair Campbell won the toss and put his faith in his bowling attack when he decided to let the home side take first guard. Pakistan succumbed to a good collective effort from the bowling unit led by Heath Streak. They were bowled out for 296, with Olonga picking up 2 wickets.

After conceding first-innings lead of 58, Olonga came back to rip apart Pakistan’s batting line-up that boasted of heavyweights like Saeed Anwar, Aamer Sohail, Ijaz Ahmed and Inzamam-ul-Haq to name a few. He finished with four for 78 as Pakistan were bundled out for 103. Olonga finished with match figures of 6 for 89, his best in Tests.

Olonga’s love affair with India extended into the next World Cup. This time he came with ample amount of practice. India, bereft of their star batsman Sachin Tendulkar, were set a target of 253 to get from 46 overs. When Olonga came on to bowl the 44th over, India needed just 7 runs to win.

Olonga turned the equation around. The over began with an over-pitched delivery to left-handed Robin Singh from around the wicket. Singh drove uppishly and was caught at cover by Alastair Campbell. Anil Kumble joined Javagal Srinath when India needed 7 runs from 10 balls and Zimbabwe needed 2 wickets.

Olonga shifted back to over the wicket and a full delivery angled into Srinath went through his bat and pad and crashed onto the stumps. Zimbabwe were on the cusp of a memorable win.

Venkatesh Prasad walked out to face the last ball of Olonga’s over with 4 runs required. Prasad shuffled across in a bid to nudge the ball behind square and steal a single. But the delivery was too quick for Prasad to get his bat down on time and the ball struck him right on the pads.

Olonga did a 360-degree jump with his hands up in the air and Peter Wiley was quick to raise his finger. The Indian contingent sat in disbelief as the Zimbabwean players crowded Olonga and huddled around him to celebrate one of the best wins in the history of Zimbabwean cricket.

Olonga celebrated the turn of the new millennium with his career-best figures of 6 for 19 against England in an ODI at Cape Town in March 2000. With just 211 to defend, Olonga had his task cut out. In the fourth over of England’s innings, Olonga struck twice to remove Nick Knight and Graham Hick. These wickets paved the way for a massive 104-run victory for Andy Flower’s men as Olonga dismissed the top 5 batsmen to leave England reeling at 47 for 5 after which they never quite recovered.

Olonga showed keen interest in music after moving to London in 2003. He went on to win Channel Five’s The All Star Talent Show in 2006 for Operatic singing and he went on to release an album titled Aurelia in the same year.

Olonga’s topsy-turvy career saw an untimely death due to unforeseen and cruel circumstances. However, there sure is a light at the end of the dark tunnel for the Zimbabwean bowler who has come away unhurt from a nightmarish situation, only to live his dream. Olonga’s inspirational journey is a life lesson for all aspiring cricketers in Zimbabwe and all over the world to stick by what they believe and uphold the spirit in which the game was first conceived.