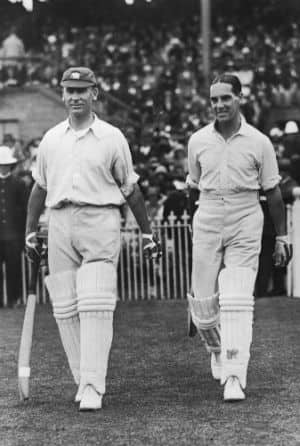 Jack Hobbs (left) and Herbert Sutcliffe go out to open the England innings in the 1925 Melbourne Test at Melbourne. The pair put on 283, their third century partnership in successive innings © Getty Images

Herbert Sutcliffe, born November 24, 1894, was one of the best opening batsmen ever. Arunabha Sengupta looks back on the career of the man who ranks right up there with the greatest bad-wicket players of all time.

He was a scrapper. In cricketing terms, he was a Yorkshireman and a half.

He ended with an average of 60.73 in Tests, yet one finds precious little in terms of documented eulogies to his craft of batting. Wisden does talk about his artistry and  goes on to state that his off-drive wore a silk hat – but that was in his obituary, when noble cricketers departing for the happy grounds of the other world carry away characteristics that seldom graced them in their active days.

Batting style, or the lack of it

Herbert Sutcliffe was not a pretty batsman to watch. His technique was his own; he could not stoop low enough to plagiarise those of his illustrious teammates such as Wally Hammond or Jack Hobbs. Nor did he subscribe to coaching manuals. He grasped the bat as if he intended to chop wood with the south west corner, and met the ball with less than the full width when he played forward. Sutcliffe’s grip forced his bat to face cover point and the inside edge towards mid-on. CB Fry called him “The Hatchet Man” and Ray Robinson observed that Sutcliffe’s bat reminded him of a twisted front tooth.

He used to lunge while playing off the front foot – giving the indication that at least to leg-spinners on fast wickets, he thrust his bat and left the rest to luck. And Australia, the land full of fast wickets and legendary leg-spinners in his days, waited for him to succumb as Arthur Mailey, Bill O’Reilly and Clarrie Grimmett beat him time and again outside the off stump. The country would still be waiting when somehow, hours later, Sutcliffe would raise his bat and acknowledge the surprised applause on reaching his hundred. In Australia he did so 6 times, scoring 1,529 runs at 63.

He snicked fast bowlers and spinners with remarkable frequency, and even more incredible was the number of times the snicks eluded fielders. Ray Robinson noted once, “Sutcliffe almost made the snick respectable.”

Sutcliffe did not care how his bat defied the science and art of batsmanship. He showed no sign of emotion except complete contentment with everything. He never displayed consternation or inspected his blade when he edged or mishit. “I play each ball on its merits. If I am beaten all ends up, and get away with it, I have forgotten about it as soon as the bowler starts his run for the next delivery. Remember that the bowler can deliver only one ball at a time,” was how he explained his unquestionable philosophy.

At Sydney, in 1932, a googly from Bill O’Reilly went off the inside edge of his bat and the ball rebounded from the stumps hard enough to fall a foot away, but the fieldsmen and the umpire inspected the scene to find the bails firmly in place. Amidst all the incredulity, Sutcliffe stood least concerned by the fuss. Boosted by this piece of luck, he went on to score 194, his highest in Tests.

Neither did he mind getting into a shell and forgetting to score for overs at a stretch. And if barrackers raised their voices in protest, he shrugged it off without a thought. He scored slowly. He was used to bat all through the day, but seldom scored more than 150 in all the 6 hours. So, when he finally took a single after a long scoreless spell, a frustrated Melbourne crowd applauded loudly. Sutcliffe lifted his bat to his shoulder like a rifle and fired two rounds to silence them into a bout of laughter.

For all the Wisden eloquence about his drive, he often scored very few in the ‘V’. His most productive off-side stroke was the jab past point for a single or two. The most inviting half-volleys often escaped without a drive. At The Oval in 1930 he scored 161, with only 33 coming between point and long on. At Brisbane in 1933, he batted close to 4 hours without a boundary between second slip and square-leg.

No, he was not a pretty batsman; just a very good one, who ended with better returns than Jack Hobbs, Wally Hammond, Frank Woolley and the rest of them. No wonder Neville Cardus, that doyen of cricket writers and flamboyantly fraudulent historian, seldom wrote a word about Sutcliffe while weaving his intricate tapestry of metaphors around his celebrated opening partner Jack Hobbs. He wrote about Hobbs batting — at the wicket, at the nets, in the prime of his life and as an aged master. But Sutcliffe, who added 3249 runs with the Surrey maestro at a whopping average of 87.81, was not deemed classy enough to merit a phrase or two.

If Sutcliffe felt slighted with the attention of poetic eloquence concentrated on Hobbs, Hammond and Woolley, he seldom let it affect him. He went about batting in his characteristic way, frustrating bowlers and often the crowd, but managing to score tons of runs.

His movements at the wicket were endearing in their own right, patting down undecipherable unevenness on the pitch, picking up and removing the minute blades of grass, drawing himself up to his full five feet nine inches and surveying the field with magnificent aplomb, his cap-less head glossy with grease, the sleekest hair-do in Test cricket.

When he missed a ball outside off-stump after a full lunge, he had the habit of staying in that position, almost immovable, like waxwork, perhaps wondering what more could have been done to play the delivery. Once a Lancashire barracker was led to ask whether he thought he was a war memorial.

Although he seldom ventured into adventurous offside strokes, he left balls outside the off-stump with magnificent flourish. And he let himself go when hooking short balls. If the ancient scorecards show a six against his name, a reasonable wager is that the stroke was a hook. Jack Gregory, Tim Wall and the rest of them bounced him often in the hope of getting him caught at the leg boundary, but it happened just four times in his entire career.

His tenacious and often crabby batting technique may have seen him scratch his way to tall scores on good wickets, but it was on bad, sticky and unplayable tracks that Sutcliffe proved to be a phenomenon.

Busy making up for lost time after a late debut, delayed entry into cricket by the First World War, Sutcliffe’s greatest innings came in 1926, in his 15th Test, at The Oval. It was the fifth Test with the Ashes tied 0-0. Australia, 22 ahead in the first innings, had a good restful night’s sleep when a clap of thunder and the steady pattering of rain reassured them that the Englishmen would be caught on a sticky.

The next day, on a sodden wicket which the sun made treacherous, Sutcliffe kept one end steady while Hobbs batted with vintage skill. The pair added 172 in 225 minutes before Gregory bowled Hobbs for 100. Sutcliffe batted on for another 135 minutes, while wickets fell around him, and was out in the last over of the day for 161 chanceless runs. Wilfred Rhodes and Harold Larwood then bowled Percy Chapman’s team to victory.

Another supreme effort came in the 1928-29 rubber in Australia, when England triumphed in the third Test to clinch the Ashes. The two teams had traded blows in their first innings, with Hammond scoring a double hundred. A young man in just his second Test match, answering to the name Don Bradman, scored a second innings century and Australia set the visitors 332 to win. Rain in the night made the Melbourne track the most difficult in the world. People rushed to the Yarra Park in packed trams to watch the Englishmen being demolished.

However, after going in to bat just before lunch, Hobbs and Sutcliffe were still unbeaten at tea. Hobbs departed at 105 with his individual score of 49, but at the end of the day, Sutcliffe was still unbeaten on 83. The next day, he carried on — again playing a chanceless innings in sharp contrast to his snick-filled good wicket knocks — and was out after six and a half hour vigil for 135 with England just 14 away.

Sutcliffe’s collaboration at the top of the order with Hobbs has remained unmatched. They patted balls gently, rolled them barely clear of the pitch and singles were stolen under the noses of fieldsmen, although neither seemed to hurry between wickets. Occasionally they did say “Yes”, “No” or “Wait”, but most often fielders had no clue about their intentions. Many attributed their understanding to telepathy or at least lip-reading. Sutcliffe was never run out in Tests.

Hobbs called it a day in 1930 while Sutcliffe continued for five more years. He did put on 555 with Percy Holmes for Yorkshire versus Essex in 1932, but it was evident that Sutcliffe missed his old partner. He scored 10 hundreds in the Tests with Hobbs, 13 by the time the Surrey legend called it a day. The remaining years saw only 3 more.

His approach to the game can be summed up with this characterising anecdote. When congratulated for saving England with yet another stubborn rearguard innings, Sutcliffe once responded, “I love a dog-fight.”

The tougher the occasion, the greater was his response. A self-made batsman who ranks alongside the princes of the game.