Hiralal Gaekwad played a solitary Test in his entire career due to being outraced by Vinoo Mankad.

Hiralal Gaekwad, the Holkar mainstay, was born August 29, 1923. Abhishek Mukherjee looks at a left-arm bowler who missed out on an uneven contest with Vinoo Mankad for a slot in the national squad.

Hiralal Ghasulal Gaekwad was one of the few who went through the central state of India through its change of names: Central Provinces and Berar, Holkar, and Madhya Pradesh (he also played for Madhya Bharat once). Standing at 5 9 , Gaekwad was a versatile left-arm bowler. Don Moraes wrote of him in Green is the Grass: Hiralal Gaekwad of Holkar can use the gloss as well as turn off the old ball s seam.

Unfortunately, his career coincided with a Titan called Vinoo Mankad; with two other quality spinners (Subhash Gupte and Ghulam Ahmed) also being regular features in the side, breaking through to the side was almost impossible. As a result he ended up playing a solitary Test.

Gaekwad was brought from Nagpur by CK Nayudu. He was also incorporated in Holkar Service. CK took him under his wings, and let him stay at Suraj Kothi, where CK himself stayed. Chandra Nayudu later recalled in CK Nayudu: A Daughter Remembers that Gaekwad stayed there till we left that house on father s retirement from service.

He made his First-Class debut against Madras, taking a solitary wicket. His first performance of note came in 1944-45, when he scored 73 batting at No. 9, adding 109 with Jamshed Bhaya for the eighth wicket against Bengal. Holkar lost to Bombay in that year s Ranji Trophy final.

They made the upward journey next year as well, this time meeting Baroda in the final. Gaekwad had an excellent match: he took 2 for 21 and 2 catches in Baroda s first innings to ensure a 144-run lead for the home side; then, with Holkar in trouble at 171 for 9 against Baroda s strong attack, Gaekwad, batting at ten, remained unbeaten on 79 and added 102 with OP Rawal for the last wicket.

Chasing 418 Baroda were on track with RB Nimbalkar and Hemu Adhikari taking the score to 109. Enter Gaekwad: he broke the partnership, and though Adhikari hung around, he accounted for him as well. He eventually finished with 3 for 76, and Baroda went down fighting, losing by 56 runs.

The first great bowling performance came the following season against Bengal: after Holkar put up 350, Gaekwad routed the tourists for 165 and 153 with figures of 6 for 42 and 5 for 32. Unfortunately, he was up against Vijay Hazare and Gul Mohammad in the final against Baroda: the pair added a world record 577 for the fourth wicket; opening bowling, Gaekwad sent down 71 overs, finishing with 3 for 134; and Holkar were routed by an innings.

Holkar had another bite at the Ranji Trophy the next season, this time against Bombay. Once again Gaekwad rose to the occasion, helping rout Bombay with 3 for 19 and 6 for 90; he also scored 37, helping CS Nayudu put up 78 for the eighth wicket. Holkar lifted the Trophy again with a 9-wicket victory. With 29 wickets at 15.93, Gaekwad was named an Indian Cricket Cricketer of the Year.

Holkar kept on making it big in Ranji Trophy, with excellent performances from Gaekwad in almost every season. In 1948-49 he scored his first hundred, against Bihar: the hosts reduced Holkar to 160 for 8 after they were bowled out for 188, but Gaekwad scored 109, adding 157 with K Bhatnagar for the ninth wicket; nicely warmed up by his effort, he went on to bowl out Bihar for 128 with 3 for 27; he also took 5 catches in the match.

He fought a lone battle in the final. He top-scored with 27 as Ranga Sohoni and Hazare bowled out Holkar for 188, following which Adhikari and Hazare almost batted them Holkar of the match with a third-wicket stand of 180. But Gaekwad simply refused to give up; he toiled hard as the last 6 Baroda wickets fell for 43; he finished with figures of 69-41-67-7 his best in First-Class cricket. Despite his effort Holkar were defeated by 9 wickets.

A strong Commonwealth XI toured India the following season. They played Holkar and won by 1 wicket. Once again it was a one-man show: Holkar were bowled out for 86, but Gaekwad, bowling unchanged through the Commonwealth XI innings, kept Holkar in the match, restricting them for 197 with figures of 5 for 81. Set 190 for a victory, the tourists struggled against Gaekwad again: this time he finished with 6 for 71: the batting line-up, consisting of Frank Worrell, John Holt, and Wally Langdon, was certainly no pushover.

He was selected for an all-India XI to play against the tourists; he struggled with the ball, but still managed to return match figures of 4 for 191 as Worrell, batting at his best, played unbeaten knocks of 223 and 83. His form continued as he returned figures of 4 for 84 and 2 for 49 against the same opposition.

His next 5 innings read 4 for 36 and 6 for 84 (against Bengal), 5 for 91 and 5 for 102 (Bihar), and 4 for 98 in addition to 89 (against Delhi in the semi-final). The revenge against Baroda in the final was executed: batting at 10 Gaekwad scored 59 out of a 96-run stand with Pratap Singh, removed Gul Mohammad and the unrelated Datta Gaekwad, and Holkar won comfortably.

A different Commonwealth XI (which included Worrell again, and was captained by Les Ames, no less) toured India the following season, and once again Gaekwad picked up 5 for 75 against them. He followed it with 5 for 27 against Uttar Pradesh next match.

Despite India s shambolic display, Gaekwad did not get to play a single Test on the tour. In fact, he played only 10 matches on the tour, and was under-bowled (he got less than 20 overs a match). Despite that he finished the tour with 17 wickets at 27.29. He returned figures of 5 for 43 against Essex (a match the hosts saved with 9 wickets down); in his next match he had 4 for 32 against Glamorgan, but never got a decent spell after that. He also played against a Commonwealth XI (this time in England), had 51 not out and figures of 4 for 34 to show, but was still overlooked.

To be fair to the selectors, the series saw Mankad at his prime. The trend continued against the Pakistanis at home, where Mankad single-handedly routed them at Kotla with figures of 8 for 52 and 5 for 79. Unfortunately, Mankad could not play the next Test at Lucknow, and Gaekwad made his debut (as did Shah Nyalchand).

Unfortunately, the Test was played on a coir-matting wicket; in Fazal Mahmood Pakistan had perhaps the greatest ever exponent of matting wickets; Fazal ran through India with 5 for 52 and 7 for 42 as the hosts were bowled out for 106 and 182. Gaekwad scored 14 and 8, and was bowled by Fazal in each innings.

Between the two innings, Nazar Mohammad scored the first hundred for Pakistan, carrying his bat through the Pakistan innings with a 515-minute 124. Gaekwad toiled hard against Nazar, but went wicket-less, and conceded 47 off his 37 overs. Mankad replaced him in the third Test at Brabourne Stadium, and claimed 8 for 124 in the Test and scored 41 and 35 not out; India won the Test by ten wickets, and Gaekwad never played another Test.

That season s Ranji Trophy final at Eden Gardens would certainly go down as one of the epic contests in the history of the tournament. Gaekwad bowled a marathon spell again (74.4-30-128-4) as Bengal amassed 479; BB Nimbalkar s 219 (and a last wicket partnership worth 40 with Sayajirao Dhanawade) gave Holkar a 17-run lead, almost sealing the match for Holkar.

But Bengal struck back: Surjuram Girdhari and Benu Das Gupta added an unbroken 126 for the sixth wicket, and Probir Sen declared the innings closed at 320 for 5 (scored from 48 overs) on the fifth morning. Set 304 for a win, Holkar found themselves in tatters at 21 for 3.

The fourth wicket stand saw 70 runs being added, but the Bengal bowlers kept striking: they needed to bowl out Holkar to force a victory; a draw, on the other hand, would result in a Holkar victory on first innings lead. Gaekwad walked out to bat at 132 for 7, and saw Holkar being reduced to 149 for 9 as Dhanawade walked out to bat with 70 minutes to play.

The next hour-and-ten-minutes would surely rank among the most tense in a Ranji Trophy final. A ball even hit Dhanawade s pad and rolled on to the stumps, but the bails were not dislodged. Eventually Gaekwad, unbeaten on 17, saw Holkar save the match. It remained Holkar s final Ranji Trophy title.

Gaekwad was never reconsidered for the international level, but he continued to serve Holkar, who became runners-up in the next two editions of Ranji Trophy (Gaekwad picked up 4 wickets in each match). He continued to play for Madhya Pradesh after the name changed.

Against Rajasthan at the age of 39, Gaekwad clean bowled Ramesh Shah, Gundibail Sunderam, and Subhash Gupte in consecutive deliveries. It remains the only hat-trick by a Madhya Pradesh bowler (though Chandu Sarwate had taken a hat-trick for Holkar earlier).

Gaekwad s First-Class appearances became sporadic, but he played till 1963-64. In his last match, against Vidarbha, he scored 42 and 4, and returned match figures of 4 for 58 from 53 overs. He ended the season on a high, finishing with 13 wickets at 15.07.

A matriculate by qualification, Gaekwad became a school inspector after his tenure at Holkar Service. He passed away at 79 on January 2, 2003 at Bagdogra. The Madhya Pradesh Under-18 tournament is named after him. 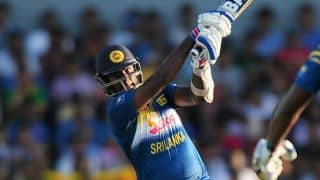 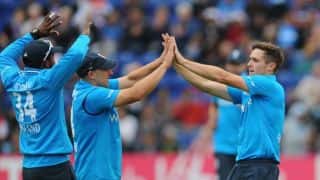