Ben Hilfenhaus led the Hurricanes bowlers in routing the Knights for a paltry 92.

The Hobart Hurricanes absolutely decimated Northern Knights en route to a commanding 86-run victory in the ninth match of the Champions League T20 (CLT20) 2014 at Raipur. The Knights, undefeated till this game, severely lost the net run rate advantage they had. Shiamak Unwalla lists some of the highlights of the game.

Hobart Hurricanes get off to an unusually slow start: In a tournament that has seen some ridiculous hitting in the first six overs of almost every game — Chennai Super Kings scored 70 for one in their first six overs merely one match ago, and Dolphins responded by scoring 85 for two — the Hurricanes scored at a far more watchful pace. Despite nine runs coming off their sixth over, they had only managed to crawl to 29 for one.

Tim Paine, Aiden Blizzard, and Shoaib Malik light up Raipur: Luckily for the Hurricanes, Tim Paine finally found some form. After Ben Dunk’s dismissal, he counterattacked in superb fashion, hitting six fours and a six in his 34-ball 43 after being on eight off 16 balls at one point.

Even Blizzard was not at his fluent best early in his innings. Blizzard went from being on 27 off 28 balls to scoring 62 off just 43 deliveries — scoring his last 35 runs in just 15 balls. Meanwhile, Malik was outstanding from the word go. He opened up with a four and six off successive balls soon after coming in to bat, and continued with his momentum later on as well.

Ben Hilfenhaus massacres top order: Kane Williamson and Anton Devcich had put on a tremendous 140-run opening stand in their last game against Cape Cobras. Unfortunately for them, that effort was not to be repeated. Joe Mennie, bowling the second over of the innings, induced a late cut from Devcich that was taken brilliantly by Ben Laughlin at point.

After that, it was a Ben Hilfenhaus show. The speedster got rid of both Williamson and skipper Daniel Flynn off successive deliveries, and then came back to snare BJ Watling as well. He finished with figures of three for 14 in his four overs, in what proved to be a Man of the Match-winning performance.

Northern Knights surrender without a fight: It was perhaps too much to expect once Williamson, Devcich and Flynn had been dismissed with merely five runs on the board, but the manner in which the Knights folded up after that was both surprising and rather disappointing. Given how impressive they had been till this game, one would have expected the Knights to show a bit more grit to fight it out. Barring Scott Styris — who achieved a personal landmark — and Tim Southee, no other batsman even got to double figures as the Knights folded up for just 92. 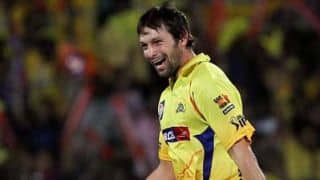