This valuable piece of memorabilia surfaced at the Casey research station.

A cricket bat signed by the Australian and Sri Lankan Test teams of 1988 that turned up in Antarctica last month continues to stump experts as to how it landed up in Earth’s southernmost continent.

In late January, the Australian Antarctic Division – a subsidiary of the Australian government – posted on its Facebook page an appeal to expeditioners to help with any information about how the bat, signed by the likes of Allan Border, Steve Waugh, Dean Jones, David Boon, Aravinda de Silva and Arjuna Ranatunga could have travelled from Perth to Antarctica.

The bat, which was signed around the time of a Test between Australia in Sri Lanka in Perth in 1988, has an inscription that reads:”To the past and future Antarctica expeditioners on the opening of the new Casey station.”

This makes it a very deliberate gesture to the expeditioners stationed in the virtually uninhabited, ice-covered landmass.

“Like most places, we have things hidden away in sheds and garages and what not, and we came across this bat on a wall. People have been walking past it for years and never really noticed it,” said Gillies. “Coincidentally, the bat is signed from 1988 which is the year that the Casey research station was opened. It’s a bit of memorabilia. We don’t know how this turned up, although we have a lot of theories.”

One of them revolves around the late Tom Maggs, who was long-serving Australian Antarctic Division staff member and the father of Bonnie Maggs who is married to Australia’s current Test captain, Tim Paine, though nobody has any substantiated evidence of a connection.

One former expeditioner, Kevin Shepherd, posted on the AAC’s Facebook page that one of the carpenters stationed at the Casey centre in 1988, Peter Cummings, was working at the Melbourne Cricket Ground prior to his departure to Antarctica. According to Shepherd, Tom Maggs asked Cummings to try and get a piece of cricketing memorabilia.

Gillies, however, is not convinced because the Test match was played at the WACA in 1988 and not at the MCG.

Another theory is that cricketer fans stationed in Antarctica could have been listening to commentary on the radio, and that during the ad breaks they were able to talk to the commentators. It is surmised that during one such chat, the listeners at Casey research centre could have asked for some memorabilia. 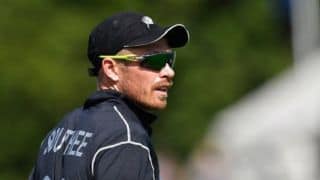