A former army officer and engineer, he was one of the first captains to understand the value of fielding.

Jack Cheetham, born May 26, 1920, was a remarkable captain. A former army officer and engineer, he was one of the first captains to understand the value of fielding as a specialised skill in cricket. He was also one of the pioneers in looking at scoring chart to devise strategies. Arunabha Sengupta recounts how his experience in the Second World War helped to shape his cricket strategies.

The Second World War saw cricket and cricketers splashing along a sea of change. The ‘Victory Tests’ of 1945 celebrated the spirit of the game, the joy of a sport and of being alive to enjoy the action. There were ex-servicemen like Keith Miller who abhorred approaching cricket as if it was war. The veterans of the War often formed a group amongst themselves within the team, a select club that was exclusive in membership, open only to the ones who had looked death in the eye.

In England, the War diminished resources. Young men had paid their dues for global madness with life and limb, and it took several years to rebuild the team.

At the same time, from a remote corner of the world, the War also produced the forerunner of the modern captains.

Jack Cheetham was an army officer and engineer from Cape Town who made his Test debut at the age of 28, playing under Dudley Nourse against the visiting Australians in 1949-50. And in 1952-53, he led the Springboks to Australia — a tour that saw a closely contested series tied 2-2.

A keen student of the game, Cheetham’s experience in the battlefield helped him to hit upon the truth that fitness and fielding were necessary for, rather than ancillary to, successful cricket. And alongside he knew all about the virtues of discipline. The South Africans left for the shores of Australia on Dominion Monarch in early October of 1952. Cheetham and manager Ken Vijloen set up a schedule of training that was some decades ahead of the times.

Throughout the voyage the day started at a quarter to eight with systematically held team meetings. And after breakfast there were physical training sessions designed by the South African rugby coach Danie Craven.

And when the ship anchored at Fremantle, on that very day Cheetham ran his team through the first of the many fielding drills at the Western Australia Cricket Association Ground.

Cheetham also brought several concepts of army discipline into the team management processes, but had the foresight to keep them sufficiently light-hearted to promote acceptance. There was a ‘bounce committee’ which levied fines for certain misdemeanours — 2/6 for being late for a shipboard function, 1/- for being unshaven, 1/6 for missing church, 2/6 for making a move on the girlfriend of a colleague. Curfew was at 11 pm.

One of his more stringent rules was the ban on golf before the first Test. He argued that whacking a stationary ball might upset the preparations for meeting a moving one.

At night, Cheetham and Vijloen spent their time studying the scoring charts prepared by Bill Ferguson, another sign that he was well ahead of his times in his approach to cricket.

However, the utility of Cheetham’s war experience on the tour did not end there. He had picked up Italian as a Prisoner of War in the Western Desert. Hence, his services were required at Lennon’s Hotel before the first Test, in a domain far beyond cricket. He acted as an interpreter for the Italian Davis Cup side, there to play the American side in the Challenge Round at Adelaide. 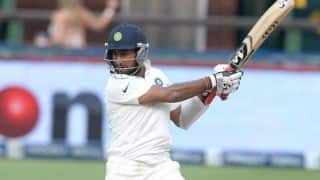