A lot has changed since the dastardly attacks on the Sri Lankan team in 2009.

The attacks on the Sri Lankan team bus on March 3, 2009 put a stop on international cricket in Pakistan for over six years. Although an International XI toured in 2012 for a couple of T20s, frontline international sides were wary of touring due to the security situation. Zimbabwe are now breaking the drought for the Pakistan fans with their historic tour. Nishad Pai Vaidya goes back in time and assesses how much the cricket world has changed.

Shahid Afridi was a mere 29 the last time international cricket was played in Pakistan. As the sport returns to the cricket-mad nation, Afridi stands as a senior veteran, having given up the longer version, focusing on T20 cricket in his sunset. It is only fitting that he will lead Pakistan in their international comeback on home soil, for he is the familiar figure linking the two eras, separated by a gap of six years. READ: When cricket’s 9/11 sounded the death knell for the future of the sport in Pakistan

The world has indeed changed since March 3, 2009 — the day the Sri Lankan team was attacked outside Gaddafi Stadium, Lahore. The cricket world is also very different and developments in these years make it look as if the gap between the last international match in Pakistan and the upcoming one is longer than those six years.  READ: Pakistan may have to maintain war-footing for future tournaments

Here is a look at some of the things that have changed since that fateful day in Lahore.

The legends graced the field of play

The T20 revolution not visible in the distance!

Some of the most established international stars were only teenagers back then, fresh from the under-19 scene: Ahmed Shehzad, Umar Akmal, Trent Boult, Corey Anderson, Joe Root, Tamim Iqbal, to name a few. Of these, only Tamim had played international cricket then. Virat Kohli, Darren Bravo, Tim Southee and Ravindra Jadeja had turned 20 in the months leading up to March 2009.

Lalit Modi was still IPL commissioner and an important part of the BCCI!

Modi was hailed as the creator of the IPL and was in the midst of planning the second edition of the tournament when the attacks hit Lahore in March 2009. He was to remain a part of the IPL and the Board of Control for Cricket in India (BCCI) for the next year before controversies saw him out. Modi is now based in London and is yet to stage a comeback.

Afghanistan were yet to play international cricket!

Consider this, in March 2009, Afghanistan were still in the midst of their remarkable ascent to the highest level. Not many had heard of their team doing well but it was around the time they rose through the World Cricket Leagues. In 2009, they played their first ODI and in 2010 they were a part of World T20. They have since featured in all the World T20s and the big World Cup.

Many consider Afghanistan as a future Test side, and hold Ireland in the same regards. READ: Zimbabwe get ready for cricket in Pakistan amidst tight scrutiny

The world of cricket had not heard of Mohammad Aamer!

Aamer was an unknown name back in March 2009. It was during the ICC World T20 2009 that the world took notice of him. He rose to become one of the most promising young bowlers in the world. However, in 2010, he was found himself in the midst of the spot-fixing controversy in England. In 2011, he was jailed for a few months after a court in England found him guilty. As international cricket returns to Pakistan, Aamer is trying to plot a comeback having served his five-year ban and returned to domestic cricket. In other words, his life has come a full cycle during this period.

Jonathan Trott was yet to make his Test debut!

Trott had only played a couple of T20Is in 2007. In August 2009, he found himself making his Test debut in the final Ashes test at The Oval, where he hit a ton. Trott then became one of the best batsmen in the world, winning the ICC Player of the Year in 2011. He was the backbone of England’s rise to the No. 1 spot in Test cricket.

Trott suffered a tough moment in 2013 and had to walk away from the Ashes tour Down Under due to stress related issues. He returned in early 2015 for a brief stint, but retired from international cricket subsequently. Thus, Trott’s 52-Test long career fits within the timeline of international cricket’s absence from Pakistan. READ: Jonathan Trott, a No. 3 specialist who let pressure get the better of him

Dav Whatmore was coaching in India!

In March 2009, Dav Whatmore was still working with BCCI and was at the helm at National Cricket Academy (NCA). Not only had he coached India under-19s but was also looking after the A-team. In 2009-10 he took over the role of coach of Kolkata Knight Riders. Having served the role for two seasons, he was then appointed coach of Pakistan in 2012, a post he served for two years. Whatmore is now Zimbabwe coach as they tour Pakistan. 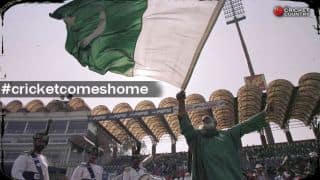