Daniel Weston, an Australian settled in Germany, on the vision of the city-based league.

Amidst a plethora of franchise-based leagues in cricket these days, including the latest avatar of T10, it is tough to stand out.

But when an instant sensation such as Pavel Florin pops up across social media streams and then onto television sets across the globe, you know you’ve made some noise and got people’s attention.

Indeed, clips of a hulking eastern European loping in and bowling an over of awkward deliveries pushed the nascent European Cricket League (ECL) in to global reckoning. With no big cricketing names on their roles or as brand ambassador, nor any fancy logos and franchise names, the ECL managed to garner much success in its inaugural edition, as opposed to a majority of other similarly small franchised-based leagues.

Ladies and gentlemen … welcome to the #EuropeanCricketLeague

In this day and age of viral content, the ECL – a concept that started with the streaming of matches in Germany to become a cricket entity on lines of the football’s European Champions League – Florin was the right fillip the league needed to stand out.

“One of the major takeaways from the ECL was that the most important part of cricket is community, respect and love for the game, as we saw with the response to Pavel Florin becoming the most loved cricketer in Europe,” Daniel Weston, founder of ECL, tells CricketCountry.

For the uninitiated, Florin is a 40-year-old bodyguard from Cluj-Napoca in Romania whose love for cricket once saw him drive 500 kilometres overnight for nine hours to get to a cricket match. During an ECL match last month, visuals of his quirky bowling action made waves on social media. Pavel’s bowling was ridiculed at first, but soon he found immense support online, with Shane Warne also tweeting about it.

Agree 100% ! Cricket is a beautiful game. Well done and congrats to everyone who made this happen. I would love to check this tournament out next year & help out, if you need a helping hand then hit me up ! Congrats again https://t.co/vgjMwJ5S0A

What this clip did was bring to the fore the level of cricket played in Europe and the support that European players need to develop their skills, which the ECL is trying to provide.

“In my 12 years playing cricket in Europe, Pavel’s style is nothing new to me,” says Weston. “There are cricket lovers all over Europe that started playing the game later in life, have unorthodox techniques but love the game deeply. So when I saw him bowl, I was not surprised, but the initial social media reaction I saw I instantly thought was not fair.

“But the uplifting story began when people started to stand up for Pavel and reacted in a positive way to the footage of him bowling, because people could relate to him as a cricket lover that doesn’t have the best technique themselves. The key moment came a short time after the match, when Pavel said in a pitch side interview that he doesn’t care what people think about his bowling style, because he loves cricket, and when he bowls, he believes he is going to take wickets.”

For Weston, originally from Australia, the idea behind the ECL was never really to make it a cash-rich league for the mere purpose of entertainment, akin to other T20 leagues, but to inspire parents to introduce their kids to cricket.

Tapping in to the huge football-crazy European market was always going to be tough and Weston realised he had to take a different route than other cricket leagues in existence. Ironically, he took a leaf out of football and its strong club-based structure.

“Every Test cricketer has played in a club before, so thats what we should celebrate,” elaborates Weston. “In Europe, it’s even more so, because football is simply clubs, so combining what works in European football, plus the fact that every community can have a cricket club, means that it levels the playing field to any team in Europe to become the kings.

“The only way cricket in Europe will work in the long term is if kids are playing, therefore, parents need to be inspired and motivated to teach their kids cricket early in life, so by having (or creating) a local cricket club, its far easier to get them playing, especially if there is now a pathway for a club cricketer to be on a world stage with the ECL.”

Weston, 36, now plays international cricket for Germany. He also has experience in trading, macro economics and data analytics and he put these skills to work for the basic framework of the ECL. The league had eight teams from eight different countries: the Netherlands, Germany, Spain, Denmark, Romania, Russia, Italy and France.

Weston chose these countries by assessing the potential of the game based on the current grassroots situation, the amount of cricket fans based on social media analytics and data on economic and demographic in countries across Europe.

Then he had the chance to meet Roger Feiner, Frank Leenders and Thomas Klooz. These names don’t ring a bell, do they?

Feiner was head of Broadcasting at FIFA and Leenders and Klooz ran the UEFA Champions League for over 18 years. The story of how Weston met these folks s quite interesting.

“While I was running my hedge fund, myself and two friends started German Cricket TV, and we started travelling around Germany, live streaming cricket being played all over the country,” recalls Weston. “We ended up having 52 million views of our videos and 1.3 million followers and the amount of cricket clubs exploded in Germany during that time.

“Then in Switzerland, I was lucky enough to meet Roger Feiner at the gala dinner for ‘Ice Cricket’, which was an event played on the frozen lake of St. Moritz. We formed a friendship over dinner, then he offered to introduce me to “Frank and Thomas”. I said sure, who are they?

Feiner told Weston that he and his two friends were looking for a new international sport to bring to Europe, and that they felt that cricket was the sport and Weston the man to do it.

“I was very excited, and we planned to all meet 30 days later, together, in Zurich, in early 2018,” says Weston. “I then had a few weeks to prepare my pitch to them, and after doing lots of reading and thinking, I was convinced that the way to grow cricket was to create a ‘Champions League model’, just as they had with football, because I had seen how fast the game could grow in Germany if we just added a few cameras, streaming, promotion and awareness for the game. Then in the months to follow, we set out our plan and I approached the federations to see if they were interested in joining the ECL at its foundations.”

The federations gave Weston their support, for it could make their own domestic leagues more competitive. As the champions of their respective domestic leagues, the clubs were invited to the ECL. Weston and the team pitched their ideas and found broadcasters who willing to show the ECL, and they gave it to them for free.

The T10 format was chosen to test the waters and the initial success means that this will take the form of a regular T20 format in the coming years. “We wanted to create a firework and showcase event to prove the concept and announce the arrival of European cricket,” says Weston. “We are happy with the outcome and now have a lot to improve for next year to grow upon the momentum we have for cricket across the region.”

However, the vision for the league remains the same – to be an inspiration.

“The vision has to be on doing what motivates current cricketers to play today, and what inspires parents to introduce their kids to cricket for tomorrow,” says Weston. “If there are multiples in the amount of cricket communities there are in Europe, then the sport will grow, friendships will be formed, heroes will be made and cricket becomes Europe’s number one summer sport in the decades to come.”

The ECL 2019 was won by Netherland’s VOC Rotterdam which consists of Dutch internationals such as skipper Pieter Seelar, Max O’Dowd and Scott Edwards.

As for Florin and his team Cluj Cricket Club, they finished at the bottom of the table with zero wins. Florin batted just once, scoring one off two deliveries and bowled just 1.1 overs while giving away 11 runs. But as he himself said, he doesn’t care, because he loves cricket. 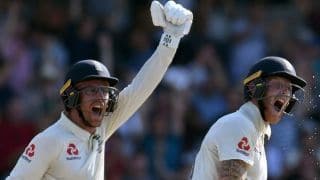