Though Virat Kohli's numbers at this point may look inferior to Sachin Tendulkar’s, to the former's credit, he has temperament by his side

Virat Kohli failed miserably in England. He went knocking the doors to Sachin Tendulkar for advice. “The best advice (from Tendulkar) was not to read and look up things that are written about me,” said Kohli after the interaction.

Kohli and Tendulkar have shared the dressing room for a few years. But that was the interaction post England, which saw Kohli’s Test career leapfrog to another level. In the next 4 Tests that he played in Australia, he amassed 640 runs at 128. The captaincy soon fell upon and histories were what he went on to topple…

The Kohli story is known. He is a modern great. By the time he ends, he will figure amongst the greatest to have mastered the willow. Tendulkar already features there. He is arguably regarded as the most complete batsman since Don Bradman. Ever since Kohli hit the remarkable consistent phase, comparisons between Tendulkar and him have been drawn at all levels.

Tendulkar is regarded as one of the finest to have graced ODIs, but Kohli has been registering astronomical numbers in the 50-over format and currently boasts numbers superior to even the likes of Viv Richards, MS Dhoni, Michael Bevan and AB de Villiers. However, we are discussing Tests here.

Kohli, alongside Steven Smith, Joe Root and Kane Williamson are set to dominate this phase for a while now. Kohli has been a late bloomer. In fact, when Tendulkar retired in November 2013, Kohli already — over 2 years into this format — was averaging just over 41.

A year later, Dhoni retired from this format and Kohli took over. Since then, he has averaged almost 60. The Colombo Test saw him play his 100th Test innings. He had just registered his 17th Test ton in his 99th innings, but here he was outfoxed by Rangana Herath for 13. Cheteshwar Pujara and Ajinkya Rahane seized the opportunity and scored hundreds.

Tendulkar’s 100th innings wasn’t eventful either. He was trapped leg before for 6 by Saqlain Mushtaq. Not many remember the Test for Tendulkar’s milestone innings, but Anil Kumble’s 10-for in the fourth innings that helped India level the series 1-1. Coincidentally, Tendulkar too slammed a ton in his 99th innings— the famous 136 at Chennai.

Tendulkar was not only 3 years younger when he touched the mark, but also had completed a stint as India’s captain. He had scored at bulk and all around the globe. As a teenager, he had mastered the hostile English, South African and Australian conditions. From Donalds to Ambroses to Akrams, the Little Master enthralled the world, captured the heart of a nation and became the game’s poster boy.

Lara and Tendulkar were the Ronaldo and Messi of that cricketing era.

Shane Warne got nightmares. There were days when even Glenn McGrath was sledged. His drives at Perth made the bully-like Merv Hughes prophesise that the little boy would go past Allan Border.

Tendulkar could bullet an outside off-stump delivery through midwicket or cut a ball on the leg-stump. He could score at bulk not playing a stroke outside off-stump and still be aggressive despite back injury preventing him pulls or going over the top.

Kohli has gone on records to say that the comparisons with Tendulkar “embarrass” him. Tendulkar has dismissed the same stating that both had contrasting approach and technique to batting.

After 100 Test innings, Tendulkar does have a superior record no doubt, but Kohli’s rise over the past 3 years cannot be disregarded. Kohli is yet to conquer England. He hasn’t faced the best of attacks. The Miguel Cummins and Jason Holders wouldn’t have featured in a second string West Indian side even in the mid-90s. But that isn’t Kohli’s fault. He has conquered the Heraths in Sri Lanka and Steyns in South Africa and Johnsons in Australians. Whatever was presented to him, he excelled in that.

Though the numbers at this point may look inferior to Tendulkar’s, to Kohli’s credit, he has temperament by his side. In the 2016-17 season, he slammed as many as 4 double centuries in 4 consecutive series. Tendulkar at this juncture had none.

By his 100th Test innings, Tendulkar had already finished a stint as captain and averaged almost 46. India had lost in South Africa and West Indies, won against Australia and South Africa at home, and had two drawn series against Sri Lanka — home and away. Kohli, to his credit, has captained 7 full series as skipper and is midway on to his eighth, and is yet to lose one. And his average touches 60!

Ifs and buts and other subjectivity to comparisons will never lead to a solution. India are enjoying a successful No.1 stint at the moment. Kohli is at No.5 in ICC Test batsmen ranking (below Smith, Root, Williamson and Pujara), and if India wish to enjoy their extended honeymoon at the apex, Kohli’s wizardry with the willow will be amongst the foremost needs.

Suvajit Mustafi consumes cricket for lunch, fiction for dinner and munches numerous other snacks throughout the day. Yes, a jack of several trades, all Suvajit dreamt of was being India’s World Cup winning skipper but ended up being a sports writer, author, screenwriter, director, copywriter, graphic designer, sports marketer, strategist, entrepreneur, philosopher and traveller. Donning so many hats, it’s cricket which gives him the ultimate high and where he finds solace. He can be followed at @RibsGully [Twitter] and rivu7 [Facebook].
First Published on August 4, 2017 2:19 PM IST
Last updated on August 4, 2017 2:19 PM IST
TOPICS:
India India tour of Sri Lanka 2017 Infographics Photos Sachin Tendulkar Virat Kohli Ravichandran Ashwin completes career double of 2,000 runs and 200 wickets; becomes second-quickest Indian to do so 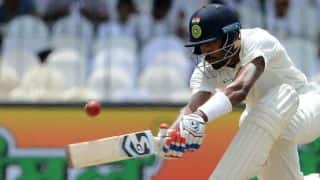